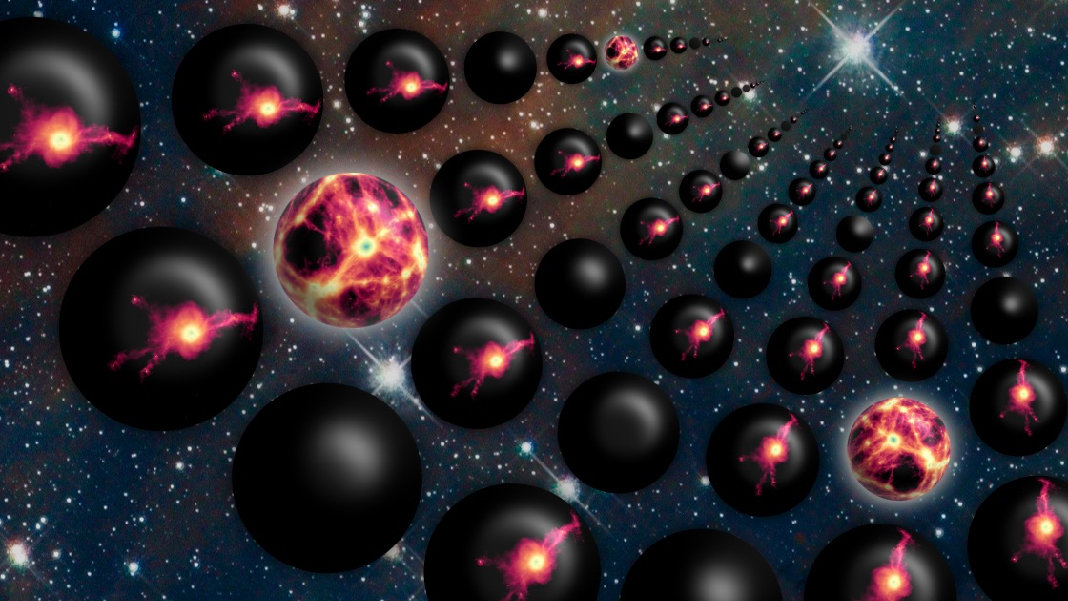 Why is there life in our universe? The existence of galaxies, stars, planets, and ultimately life seem to depend on a small number of finely tuned fundamental physical constants. Had the laws of physics been different, we would not have been around to debate the question. So how come the laws of our universe just happen to be the way they are—is it all a lucky coincidence?

In the last few decades, an increasingly popular theory has come to the fore. The multiverse theory suggests that our universe is just one of many in an infinite multiverse where new universes are constantly being born. It seems likely that baby universes are produced with a wide range of physical laws and fundamental constants, but that only a tiny fraction of these are hospitable for life. It would therefore make sense that there is a universe with the strange fundamental constants we see, finely tuned to be hospitable for life.

But now our new discovery, published in the Monthly Notices of the Royal Astronomical Society, complicates things by suggesting that life may actually be a lot more common in parallel universes than we had thought.

While there is no physical evidence that parallel universes exist (at the moment), the theories that explain how our universe came to be seem to suggest that they are inevitable. Our universe started with a Big Bang, followed by a period of very rapid expansion, known as inflation. However, according to modern physics, inflation is unlikely to have been a single event. Instead, many different patches of the cosmos could suddenly start inflating and expand to huge volumes—each bubble creating a universe in its own right.

Some believe that we may one day be able to witness imprints of collisions with parallel universes in the cosmic microwave background, which is the radiation left over from the birth of the universe. Others, however, believe the multiverse is a mathematical quirk rather than a reality.

One hugely important constant in the universe is a mysterious, unknown force dubbed dark energy. At the present day, this makes up 70% of our universe. Rather than our universe slowing down as it expands, dark energy causes its expansion to accelerate.

While our universe has a strangely low value of dark energy, it is this low value that makes our universe hospitable to life. The multiverse theory can help us explain why it is so low—there will always be some universes with unlikely values in an infinite multiverse.

However, the theory nevertheless requires that our universe’s value for the abundance of dark energy is close to the maximum allowed for intelligent life to exist. This is because larger values of dark energy should be more common in the multiverse than lower values. At the same time, we expect life to exist only in a small group of universes with a value below a certain maximum—those in which matter can still clump together to form stars and galaxies. This means that universes with a comparatively high value of dark energy (close to maximum) that are hospitable to life should be more numerous than universes with low values (close to minimum), meaning they are more likely.

So do we live in such a universe? Through our study, we set out to find out what this maximum level is and whether we are close to it.

Our computer model of the universe, the EAGLE project, has been successful at explaining the observed properties of galaxies in our universe. The simulations take the laws of physics and follow the formation of stars and galaxies as the universe expands after the Big Bang. The galaxies that emerge in our model look remarkably like those seen in the night sky through telescopes.

This success makes it possible to convincingly investigate how the formation of stars and galaxies would proceed in other parts of the multiverse. We created a series of computer-generated universes that were identical apart from having different amounts of dark energy. Initially, the universes all expanded at similar rates but, as the energy left over from the Big Bang dissipated, the power of dark energy became important. The universes with abundant dark energy accelerated vigorously.

Our discovery puts the idea that an infinite multiverse can explain the low abundance of dark energy on very rocky ground. Interestingly, in his last published paper, Stephen Hawking argued that the multiverse is far from infinite, and that it is more likely to contain a finite number of rather similar parallel universes.

We are forced to an uncomfortable conclusion. The value of dark energy we observe is far too unlikely for the multiverse to explain why we are here. It seems that a new physical law, or a new approach to understanding dark energy, is needed to account for the deeply puzzling properties of our universe. But the good news is that we are one step closer to cracking it.