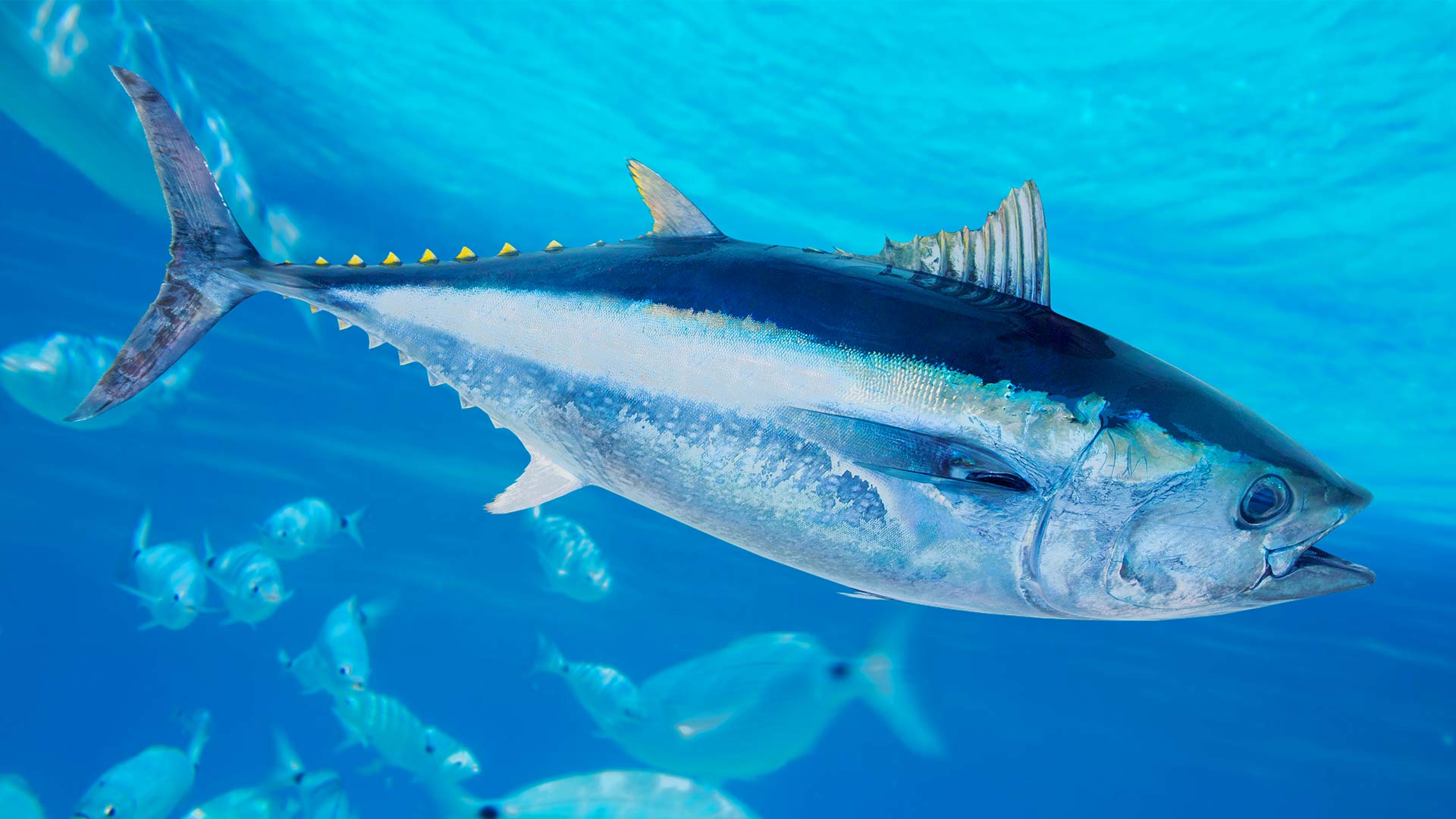 “You really can’t justify tuna in Chicago as a source of sustenance.” That’s according to Dr. Sylvia Earle, a National Geographic Society Explorer who was the first female chief scientist at NOAA. She came to the Good Food Institute’s Good Food Conference to deliver a call to action around global food security, agriculture, environmental protection, and the future of consumer choice.

It seems like all options should be on the table to feed an exploding population threatened by climate change. But Dr. Earle, who is faculty at Singularity University, drew a sharp distinction between seafood for sustenance versus seafood as a choice. “There is this widespread claim that we must take large numbers of wildlife from the sea in order to have food security.”

A few minutes later, Dr. Earle directly addressed those of us in the audience. “We know the value of a dead fish,” she said. That’s market price. “But what is the value of a live fish in the ocean?”

That’s when my mind blew open. What is the value—or put another way, the cost—of using the ocean as a major source of protein for humans? How do you put a number on that? Are we talking about dollars and cents, or about something far larger?

Dr. Liz Specht of the Good Food Institute drew the audience’s attention to a strange imbalance. Currently, about half of the yearly global catch of seafood comes from aquaculture. That means that the other half is wild caught. It’s hard to imagine half of your meat coming directly from the forests and the plains, isn’t it? And yet half of the world’s seafood comes from direct harvesting of the oceans, by way of massive overfishing, a terrible toll from bycatch, a widespread lack of regulation and enforcement, and even human rights violations such as slavery.

The search for solutions is on, from both within the fishing industry and from external agencies such as governments and philanthropists. Could there be another way?

Makers of plant-based seafood and clean seafood think they know how to feed the global demand for seafood without harming the ocean. These companies are part of a larger movement harnessing technology to reduce our reliance on wild and domesticated animals—and all the environmental, economic, and ethical issues that come with it.

Producers of plant-based seafood (20 or so currently) are working to capture the taste, texture, and nutrition of conventional seafood without the limitations of geography or the health of a local marine population. Like with plant-based meat, makers of plant-based seafood are harnessing food science and advances in chemistry, biology, and engineering to make great food. The industry’s strategy? Start with what the consumer wants, and then figure out how to achieve that great taste through technology.

So how does plant-based seafood taste? Pretty good, as it turns out. (The biggest benefit of a food-oriented conference is that your mouth is always full!)

I sampled “tuna” salad made from Good Catch Food’s fish-free tuna, which is sourced from legumes; the texture was nearly indistinguishable from that of flaked albacore tuna, and there was no lingering fishy taste to overpower my next bite. In a blind taste test, I probably wouldn’t have known that I was eating a plant-based seafood alternative. Next I reached for Ocean Hugger Food’s Ahimi, a tomato-based alternative to raw tuna. I adore Hawaiian poke, so I was pleasantly surprised when my Ahimi-based poke captured the bite of ahi tuna. It wasn’t quite as delightfully fatty as raw tuna, but with wild tuna populations struggling to recover from a 97% decline in numbers from 40 years ago, Ahimi is a giant stride in the right direction.

These plant-based alternatives aren’t the only game in town, however.

The clean meat industry, which has also been called “cultured meat” or “cellular agriculture,” isn’t seeking to lure consumers away from animal protein. Instead, cells are sampled from live animals and grown in bioreactors—meaning that no animal is slaughtered to produce real meat.

Clean seafood is poised to piggyback off platforms developed for clean meat; growing fish cells in the lab should rely on the same processes as growing meat cells. I know of four companies currently focusing on seafood (Finless Foods, Wild Type, BlueNalu, and Seafuture Sustainable Biotech), and a few more are likely to emerge from stealth mode soon.

Importantly, there’s likely not much difference between growing clean seafood from the top or the bottom of the food chain. Tuna, for example, are top predators that must grow for at least 10 years before they’re suitable as food. Each year, a tuna consumes thousands of pounds of other fish, shellfish, and plankton. That “long tail of groceries,” said Dr. Earle, “is a pretty expensive choice.” Excitingly, clean tuna would “level the trophic playing field,” as Dr. Specht pointed out.

All this is only the beginning of what might be possible.

Combining synthetic biology with clean meat and seafood means that future products could be personalized for individual taste preferences or health needs, by reprogramming the DNA of the cells in the lab. Industries such as bioremediation and biofuels likely have a lot to teach us about sourcing new ingredients and flavors from algae and marine plants. By harnessing rapid advances in automation, robotics, sensors, machine vision, and other big-data analytics, the manufacturing and supply chains for clean seafood could be remarkably safe and robust. Clean seafood would be just that: clean, without pathogens, parasites, or the plastic threatening to fill our oceans, meaning that you could enjoy it raw.

What about price? Dr. Mark Post, a pioneer in clean meat who is also faculty at Singularity University, estimated that 80% of clean-meat production costs come from the expensive medium in which cells are grown—and some ingredients in the medium are themselves sourced from animals, which misses the point of clean meat. Plus, to grow a whole cut of food, like a fish fillet, the cells need to be coaxed into a complex 3D structure with various cell types like muscle cells and fat cells. These two technical challenges must be solved before clean meat and seafood give consumers the experience they want, at the price they want.

In this respect clean seafood has an unusual edge. Most of what we know about growing animal cells in the lab comes from the research and biomedical industries (from tissue engineering, for example)—but growing cells to replace an organ has different constraints than growing cells for food. The link between clean seafood and biomedicine is less direct, empowering innovators to throw out dogma and find novel reagents, protocols, and equipment to grow seafood that captures the tastes, textures, smells, and overall experience of dining by the ocean.

Asked to predict when we’ll be seeing clean seafood in the grocery store, Lou Cooperhouse the CEO of BlueNalu, explained that the challenges aren’t only in the lab: marketing, sales, distribution, and communication with consumers are all critical. As Niya Gupta, the founder of Fork & Goode, said, “The question isn’t ‘can we do it’, but ‘can we sell it’?”

The good news is that the clean meat and seafood industry is highly collaborative; there are at least two dozen companies in the space, and they’re all talking to each other. “This is an ecosystem,” said Dr. Uma Valeti, the co-founder of Memphis Meats. “We’re not competing with each other.” It will likely be at least a decade before science, business, and regulation enable clean meat and seafood to routinely appear on restaurant menus, let alone market shelves.

Until then, think carefully about your food choices. Meditate on Dr. Earle’s question: “What is the real cost of that piece of halibut?” Or chew on this from Dr. Ricardo San Martin, of the Sutardja Center at the University of California, Berkeley: “Food is a system of meanings, not an object.” What are you saying when you choose your food, about your priorities and your values and how you want the future to look? Do you think about animal welfare? Most ethical regulations don’t extend to marine life, and if you don’t think that ocean creatures feel pain, consider the lobster.

Seafood is largely an acquired taste, since most of us don’t live near the water. Imagine a future in which children grow up loving the taste of delicious seafood but without hurting a living animal, the ocean, or the global environment.

Do more than imagine. As Dr. Earle urged us, “Convince the public at large that this is a really cool idea.”

Table based on Figure 5 of the report “An Ocean of Opportunity: Plant-based and clean seafood for sustainable oceans without sacrifice,” from The Good Food Institute.