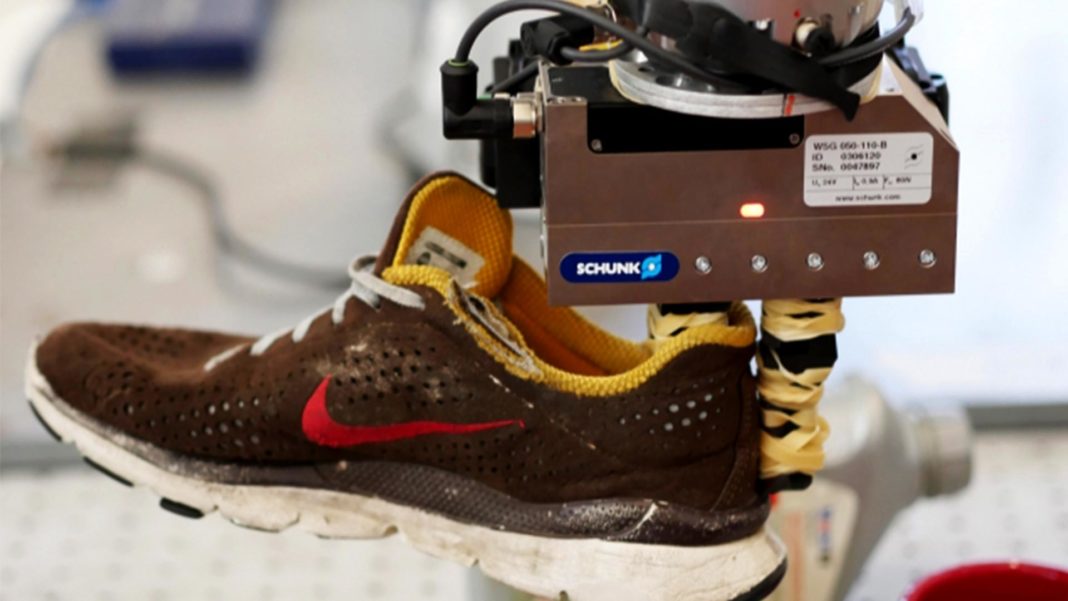 Back in 2016, somewhere in a Google-owned warehouse, more than a dozen robotic arms sat for hours quietly grasping objects of various shapes and sizes. For hours on end, they taught themselves how to pick up and hold the items appropriately—mimicking the way a baby gradually learns to use its hands.

Now, scientists from MIT have made a new breakthrough in machine learning: their new system can not only teach itself to see and identify objects, but also understand how best to manipulate them.

This means that, armed with the new machine learning routine referred to as “dense object nets (DON),” the robot would be capable of picking up an object that it’s never seen before, or in an unfamiliar orientation, without resorting to trial and error—exactly as a human would.

The deceptively simple ability to dexterously manipulate objects with our hands is a huge part of why humans are the dominant species on the planet. We take it for granted. Hardware innovations like the Shadow Dexterous Hand have enabled robots to softly grip and manipulate delicate objects for many years, but the software required to control these precision-engineered machines in a range of circumstances has proved harder to develop.

This was not for want of trying. The Amazon Robotics Challenge offers millions of dollars in prizes (and potentially far more in contracts, as their $775m acquisition of Kiva Systems shows) for the best dexterous robot able to pick and package items in their warehouses. The lucrative dream of a fully-automated delivery system is missing this crucial ability.

Meanwhile, the Robocup@home challenge—an offshoot of the popular Robocup tournament for soccer-playing robots—aims to make everyone’s dream of having a robot butler a reality. The competition involves teams drilling their robots through simple household tasks that require social interaction or object manipulation, like helping to carry the shopping, sorting items onto a shelf, or guiding tourists around a museum.

Yet all of these endeavors have proved difficult; the tasks often have to be simplified to enable the robot to complete them at all. New or unexpected elements, such as those encountered in real life, more often than not throw the system entirely. Programming the robot’s every move in explicit detail is not a scalable solution: this can work in the highly-controlled world of the assembly line, but not in everyday life.

Computer vision is improving all the time. Neural networks, including those you train every time you prove that you’re not a robot with CAPTCHA, are getting better at sorting objects into categories, and identifying them based on sparse or incomplete data, such as when they are occluded, or in different lighting.

But many of these systems require enormous amounts of input data, which is impractical, slow to generate, and often needs to be laboriously categorized by humans. There are entirely new jobs that require people to label, categorize, and sift large bodies of data ready for supervised machine learning. This can make machine learning undemocratic. If you’re Google, you can make thousands of unwitting volunteers label your images for you with CAPTCHA. If you’re IBM, you can hire people to manually label that data. If you’re an individual or startup trying something new, however, you will struggle to access the vast troves of labeled data available to the bigger players.

This is why new systems that can potentially train themselves over time or that allow robots to deal with situations they’ve never seen before without mountains of labelled data are a holy grail in artificial intelligence. The work done by MIT’s Computer Science and Artificial Intelligence Laboratory (CSAIL) is part of a new wave of “self-supervised” machine learning systems—little of the data used was labeled by humans.

The robot first inspects the new object from multiple angles, building up a 3D picture of the object with its own coordinate system. This then allows the robotic arm to identify a particular feature on the object—such as a handle, or the tongue of a shoe—from various different angles, based on its relative distance to other grid points.

This is the real innovation: the new means of representing objects to grasp as mapped-out 3D objects, with grid points and subsections of their own. Rather than using a computer vision algorithm to identify a door handle, and then activating a door handle grasping subroutine, the DON system treats all objects by making these spatial maps before classifying or manipulating them, enabling it to deal with a greater range of objects than in other approaches.

“Many approaches to manipulation can’t identify specific parts of an object across the many orientations that object may encounter,” said PhD student Lucas Manuelli, who wrote a new paper about the system with lead author and fellow student Pete Florence, alongside MIT professor Russ Tedrake. “For example, existing algorithms would be unable to grasp a mug by its handle, especially if the mug could be in multiple orientations, like upright, or on its side.”

Class-specific descriptors, which can be applied to the object features, can allow the robot arm to identify a mug, find the handle, and pick the mug up appropriately. Object-specific descriptors allow the robot arm to select a particular mug from a group of similar items. I’m already dreaming of a robot butler reliably picking my favourite mug when it serves me coffee in the morning.

Google’s robot arm-y was an attempt to develop a general grasping algorithm: one that could identify, categorize, and appropriately grip as many items as possible. This requires a great deal of training time and data, which is why Google parallelized their project by having 14 robot arms feed data into a single neural network brain: even then, the algorithm may fail with highly specific tasks. Specialist grasping algorithms might require less training if they’re limited to specific objects, but then your software is useless for general tasks.

As the roboticists noted, their system, with its ability to identify parts of an object rather than just a single object, is better suited to specific tasks, such as “grasp the racquet by the handle,” than Amazon Robotics Challenge robots, which identify whole objects by segmenting an image.

This work is small-scale at present. It has been tested with a few classes of objects, including shoes, hats, and mugs. Yet the use of these dense object nets as a way for robots to represent and manipulate new objects may well be another step towards the ultimate goal of generalized automation: a robot capable of performing every task a person can. If that point is reached, the question that will remain is how to cope with being obsolete.