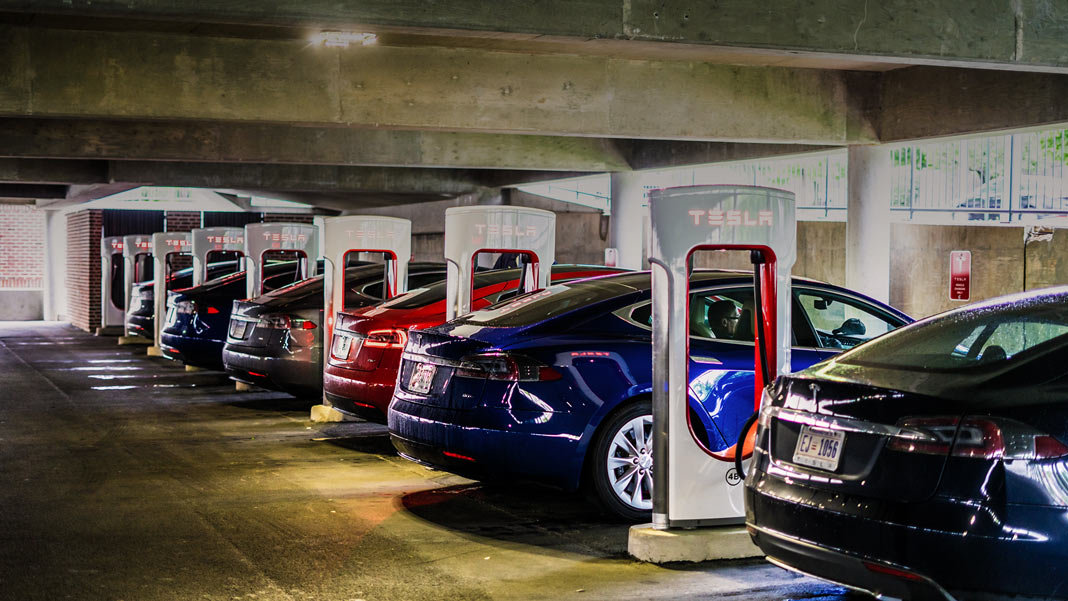 Today, less than two percent of the vehicles Americans buy are electric. But within the next three decades, some automotive industry experts expect electric vehicles could make up the majority of US and global car sales.

All told, American drivers log about 3 trillion miles per year, consuming more than 170 billion gallons of gasoline and diesel in the process. Converting all those road miles to electricity would place new demands on the nation’s system for producing and delivering electricity.

As part of a major energy infrastructure study, we are seeking to understand how an increase in electric vehicles (EVs) might change how energy is supplied and consumed. So far, we have figured out the impact of electric vehicles will depend on where you live and when they are charged.

How Much Electricity EVs Will Demand

Using a similar technique featured in our recent paper on hydrogen vehicles, we developed a state-by-state assessment of the amount of electricity that would be needed to charge an electrified fleet of personal cars, trucks and SUVs.

We started by estimating the amount of gasoline every county consumes today. We then converted vehicle miles traveled into electricity requirements based on the efficiency of today’s EVs.

Admittedly, these methods have limitations. The number of miles traveled could change significantly if autonomous vehicles become commonplace and more people rely on Uber, Lyft, and other vehicle sharing services, for example. However, we believe our approach provides a good starting point for estimating future electricity demand if EVs become the norm.

The US electric grid has continually evolved to accommodate new demands throughout the last century. But if the nation’s vehicles were to rapidly become electric, the grid would need to change faster. Depending on local driving habits and the grid infrastructure that’s already in place, our analysis shows that EVs will have different impacts in different regions.

Since Texas and California consume more electricity than any other states, they provide a good snapshot of what a future filled with electric vehicles might look like. In both cases, an increase in EVs would drive consumption higher, with the potential to strain local infrastructure.

If virtually all passenger cars in Texas were electrified today, the state would need approximately 110 more terawatt-hours of electricity per year—the average annual electricity consumption of 11 million homes. The added electricity demand would result in a 30 percent increase over current consumption in Texas.

By comparison, because of a more temperate climate, California might require nearly 50 percent more electricity than it currently consumes if passenger vehicles in the state were fully electrified. That means California would need to generate an additional 120 terawatt-hours of electricity per year.

A Tale of Two Grids

A look at the two states’ grids demonstrates how reliance on EVs for mobility could vary from place to place.

In 2018, the Electric Reliability Council of Texas, the organization that manages most of Texas’s electric grid, hit a new peak demand of roughly 73 gigawatts on July 19. Looking at the off-peak hours for July 19, 2018, we found the ERCOT grid had spare capacity to provide more than 350 gigawatt-hours of additional electricity if idled power plants continued to operate throughout the day, not just during peak demand.

Based on our estimates, the charging requirements for a fully electrified fleet of personal cars in Texas would be about 290 gigawatt-hours per day, less than the available surplus of generation capacity. In other words, the Texas grid could theoretically charge a fully electrified vehicle fleet today if vehicles were charged during off-peak hours.

When we did the same analysis for California, however, we found that if EVs become the norm, it could push the total demand for electricity beyond the existing capacity of the Golden State’s grid.

Perhaps even more important than how much electricity EVs would consume is the question of when it would be consumed.

We based the above estimates on optimal, off-peak charging patterns. If instead most EVs were to be charged in the afternoon, the electricity grid would need more generation capacity to avoid outages.

To meet that demand, California and Texas would need to build new power plants or buy more electricity from neighboring states than they already do. The states might also need additional transmission and distribution infrastructure to accommodate new automotive charging infrastructure.

All told, the transition to EVs from internal combustion engine vehicles could potentially cost tens of billions of dollars in Texas and even more in California to install new electricity infrastructure if many vehicles were to be charged during peak hours.

Incentives could reduce what it will cost to equip the grid for lots of electric vehicles. For example, utilities could charge different rates for electricity during different times of day and on different days of the week. Known as time-of-use pricing, this practice can encourage vehicle charging when electricity is more abundant during off-peak hours and therefore cheaper to supply.

California and other areas, including Austin, Texas, have already begun to use different strategies for implementing time-of-use rates. Other regions might want to watch closely, and adopt the lessons learned in those places as the number of electric vehicles on the road rises.

While EVs might increase the amount of electricity the US consumes, the investment required to accommodate them may be smaller than it appears. Many regions already have sufficient generation capacity if vehicles are charged during off-peak hours. The energy storage on board EVs could provide the flexibility needed to shift charging times and help grid operators better manage the supply and demand of electricity.

What’s more, based on our calculations, the money Americans would save in fuel costs alone could offset these investments.

For example, had most of California’s vehicles been electric by 2017, we estimate that its drivers would have saved around US$25 billion that year in fuel costs based on the average prices for electricity and gasoline.

In addition to fuel savings, some market analysts expect electric cars to be cheaper than conventional vehicles by 2026, another potential economic benefit.

While it’s challenging to predict the future prices for gasoline, electricity, and vehicles, we believe it is likely that the widespread use of EVs would reduce the overall costs of transportation in California and elsewhere. These savings are even greater if the environmental benefits, especially lower carbon emissions, are taken into account.

The Union of Concerned Scientists has researched the carbon footprints of EVs versus gasoline-powered cars.

This Tiny Electric Car Is Solar-Powered and Costs $6,800