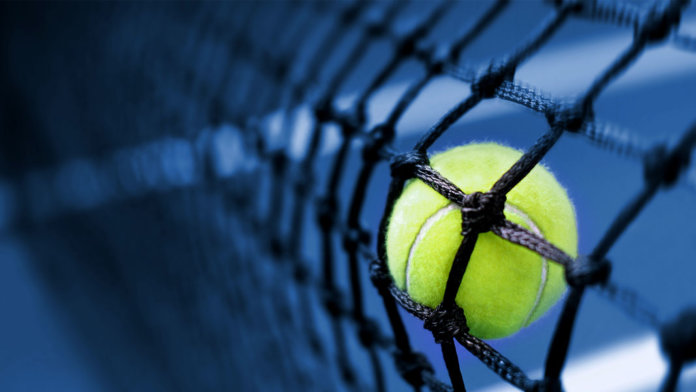 At the beginning of the 2010 season, tennis superstar Serena Williams was at the pinnacle of her sport. She was the top-ranked female tennis player in the world. However, while dining at a Munich restaurant Serena accidentally stepped on some broken glass, and after her match the next day was forced to the sidelines for the rest of the season. She finished the year ranked number four on the women’s professional tennis circuit.

After sitting out the first half of 2011 recovering from the foot injury (along with a pulmonary embolism and hematoma), Serena went back to work. While her singles record for the year was 22 wins and just 3 losses, including a fourth-round defeat at Wimbledon and a straight-set thrashing in the final round of the US Open, she had to skip both the Australian and French Opens. She ended the year ranked number 12.

Surely these results were nothing more than temporary setbacks, yet Serena’s slide continued. In 2012, she lost to 56th-ranked Ekaterina Makarova in the fourth round of the Australian Open. But it was at the French Open, the second Grand Slam event of the season, where everything fell apart completely. Serena lost to 11th ranked Virginie Razzano in the first round, the first time in her entire career that she was defeated in the opening round of a Grand Slam match. The New York Times described the defeat as “an upset that ranked among the most stunning and unexpected in the recent history…”

Doubts filled Serena’s head, and they impacted her performance. She was doing everything she had been doing in the past—she trained longer, worked harder, and her preparation was perfect—but what had brought her success in the past was no longer working, and she was no longer winning.

Why weren’t her tried-and-trusted methods working? Why wasn’t she winning? Was her time up at the top?

Creating a System of Unlearning

My inspiration to write Unlearn came from what I frequently find to be a significant inhibitor for high-performance individuals to improve. It’s not the ability to learn that holds them back, it’s the inability to unlearn old mindsets, behaviors, and methods that were once effective but that now limit their success.

Highly effective leaders are constantly searching for inspiration and new ideas. But before any real breakthroughs can happen, we need to step away from the old models, mindsets, and behaviors that are limiting our potential and current performance. While most people agree that we struggle to adopt new techniques to improve, fewer recognize that our existing knowledge and knowhow can also inhibit us further.

Unlearning is the process of letting go, reframing, and moving away from once-useful mindsets and acquired behaviors. It’s not forgetting, removing, or discarding knowledge or experience; it’s a conscious act of letting go of outdated information and actively taking in new information to inform effective decision-making and action.

The system of unlearning is based on a three-step approach to individual and collective growth which I have dubbed the Cycle of Unlearning. 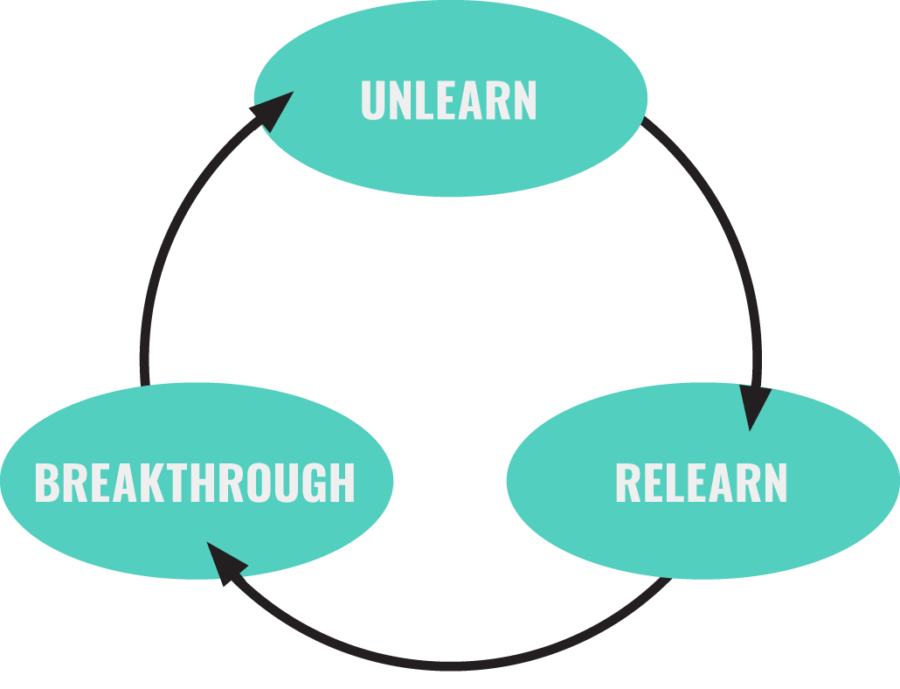 I developed this system over years of working with, advising, and coaching outstanding executives, individuals and teams. In my recently published book Unlearn, I show how high performers use this system naturally, even unintentionally, and share methods for how you can harness the  conscious act of unlearning to cultivate your character and capabilities for growth and impact.

Adopting the Cycle of Unlearning doesn’t rely on being smart, or lucky, or desperate, or all of the above. It relies only on you—your ownership and commitment to use it intentionally in your work and your life to achieve extraordinary results. By thinking big but starting small and choosing courage over comfort, you can go to places you never imagined possible.

Following the first round defeat in Paris, Serena went in search of somewhere to collect her thoughts and unlock the skills that brought her so much success, yet now caused her to struggle. She arrived at Patrick Mouratoglou’s academy, where Patrick watched her practice. After observing how she moved around the court, how she hit the ball, how she served and volleyed, he gave Serena his unvarnished feedback. “Every time you hit, you are off balance, which makes you miss a lot,” he told her. “Also, you lose power because [your] body weight doesn’t go through [the shots], and you’re not moving up, so your game is slow.”

She was curious about Patrick’s insights and said. “Let’s work on it.”  And that’s exactly what they did.

They thought big (one more Grand Slam win) and started small, introducing a few tiny tweaks to existing routines—nothing major—such as speeding up Serena’s footwork so that she could set up for shots and hit the ball earlier. As each small step showed signs of progress, the trust between them grew stronger. This gave Serena the confidence she needed to safely move away from the comfort and certainty of her tried-and-trusted methods, and tackle new techniques to win.

The pair trained together every day for the rest of the week, and then Serena returned home to the US to prepare for Wimbledon.

Just days before the Wimbledon tournament was set to begin, Serena made the decision to take on the relatively unproven Frenchman as her coach. He would step into the role that her father Richard Williams had filled for both Serena and her sister, Venus, from the first time they held a tennis racquet in their hands. What followed was truly extraordinary.

The Dynamic Duo’s Extraordinary Results Since 2012

Serena won her next 19 matches. She took Wimbledon and the US Open, a gold medal at the 2012 Summer Olympics (defeating Maria Sharapova in straight sets) and the season-closing WTA Tour

Serena Williams was back, with a vengeance.

When Serena decided to change coaches from her father to Patrick Mouratoglou, she was taking a huge risk. In the world of tennis coaching, which emphasized molding players to a rigid standard set by the coach, Mouratoglou’s methods were seen as too unconventional, even radical. Patrick had learned skills from spending time in his entrepreneurial father’s business, and then adapted and applied them to tennis coaching. He took a holistic approach to coaching, not just the game but the mindset and mentality—what many people highlight now as one of Serena’s greatest strengths.

“My goal has always been to enable every player to maximize his/her potential through individualized training. My method consists in being able to connect with your player . . . I don’t believe in a method that would fit everyone but more in one that is based on being able to build a personalized plan for each player that will lead him/her to success.

My job is about adaptation and not about repeating a [one-size-fits-all] pattern.”

Both Williams and Mouratoglou were out of their comfort zones, but this was necessary to find the breakthrough in their games. They both had something to prove, a purpose that drove them. Serena wanted to show the world she wasn’t done. Patrick wanted to show the tennis establishment that his unorthodox methods could work. Both took the courageous path in search of excellence and achieved extraordinary results as their reward.

Starting Your Own Unlearning Journey

While we may not all be as accomplished on the court as Serena Williams, leaders, executives, managers, teams, and businesses often face the same situation she did—a point at which doing the things that brought us success in the past no longer work. To succeed, we must unlearn, relearn, and breakthrough.

The stories of Serena Williams and Patrick Mouratoglou was a huge inspiration for me in writing Unlearn. It’s nice to return some inspiration to help even them achieve extraordinary results in 2019!

Thinking big but starting small, choosing courage over comfort and bravery over fear can take you to places you never imagined possible. This is the heart of my unlearning system.

Unlearning isn’t a one-and-done event. It’s a system: a system of letting go and adapting to the situational reality of the present as we look to the future. It’s recognizing that whatever it is that we have previously done may no longer be useful. Your mission is to develop the capability to know when to move away from outdated information, take in new information to inform your thinking, and adapt your behaviors as a result.

Unlearn will help you discover how to break through the barriers that hold you back to achieve the extraordinary results you seek in every aspect of your work and life.

This article is republished from Barry O’Reilly with permission. Read the original article here. 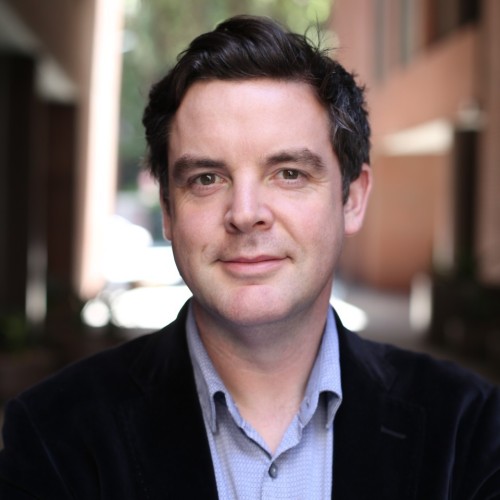