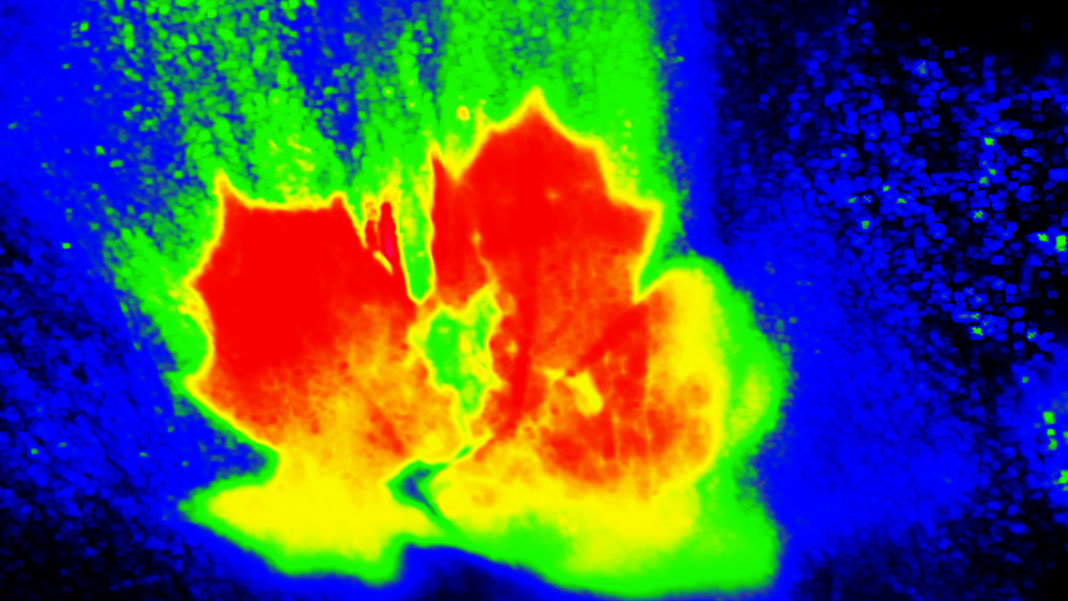 Efforts to use technology to enhance humans’ natural capabilities are moving out of the scientific fringes. A recent study on mice suggests it may eventually be possible to imbue people with infrared vision by injecting nanoparticles into their eyeballs.

The visual range of mammals encompasses a tiny sliver of the electromagnetic spectrum referred to as visible light. But other animals, like certain snakes and insects, have developed the ability to detect infrared radiation. This is a useful trait, because even in low light many objects give off or reflect infrared light.

Humans can’t detect this radiation because the pigments our eyes use to absorb light and turn it into signals our brain can interpret are only activated by photons above a certain energy level. The photons of longer-wavelength light, like infrared, don’t have the energy to get over this barrier.

To get around this, we’ve developed devices that let us see in the dark. Night vision goggles amplify scant visible light from sources like the moon and stars, as well as ambient infrared or even active infrared illumination. Thermal cameras can also detect the longest wavelength infrared radiation given off by warm objects, similar to snakes.

Researchers from China and the US have come up with a solution that could do away with this bulky equipment. They’ve created nanoparticles that convert infrared radiation into visible light, which when injected into the eyes of mice gave the animals the ability to perceive infrared light.

“This technique works as a stealthy, self-powered and near infrared-visible light compatible night vision device,” the authors said in an emailed response. “These nanoparticles not only provide the potential for close integration within the human body to extend the visual spectrum, but also open new opportunities to explore a wide variety of animal vision-related behavior.”

The particles work by absorbing multiple low-energy infrared photons before releasing a higher-energy photon in the green band of the visible light spectrum, which the mouse’s eye can perceive. A protein attached to the particles helps them anchor to the photoreceptors, ensuring the visible light is emitted as close as possible to where it needs to be detected.

To test how effective they were at augmenting the mice’s vision, researchers subjected the animals to a series of tests. They found that when infrared light was shone into the mice’s eyes, their pupils contracted and they exhibited nerve responses.

In another test, they were able to identify shapes projected in infrared to solve a maze challenge, and were even able to detect infrared patterns in bright background light. The effects seemed to last as long as 10 weeks without any observable damage to the retina.

There’s still some way to go until the nanoparticles could be used in humans, though. For a start, they were made from rare earth metals that would be difficult to convince regulators to OK for use in humans. On that front, the researchers say they are now working on an alternative made from FDA-approved compounds they think should be even more effective.

The approach also has a long way to go to catch up with current technology. The particles absorb infrared from a fairly narrow band (around 980 nanometers), which is far too short for the kind of thermal imaging used to pick up heat signatures from objects at body or room temperature.

The researchers say that problem could be fixed by combining the approach with an infrared light source, though this would negate some of the most promising military and security applications, as shining a bright infrared light would alert any adversary with night-vision equipment.

It’s also very hard to predict how the human brain would interpret the new information. It’s quite possible the new sensory information would be overwhelming, Glen Jeffery, a visual neuroscientist at University College London, told Nature.

Nonetheless, this is only the authors’ first attempt, and there’s considerable scope to tune the properties and efficiencies of the nanoparticles. The human brain is also remarkably malleable when it comes to augmenting the senses, so it’s not unrealistic to expect our brains to learn to make sense of the new sensory information.

It might not be long until getting a night-vision upgrade is as simple as booking yourself in for LASIK.