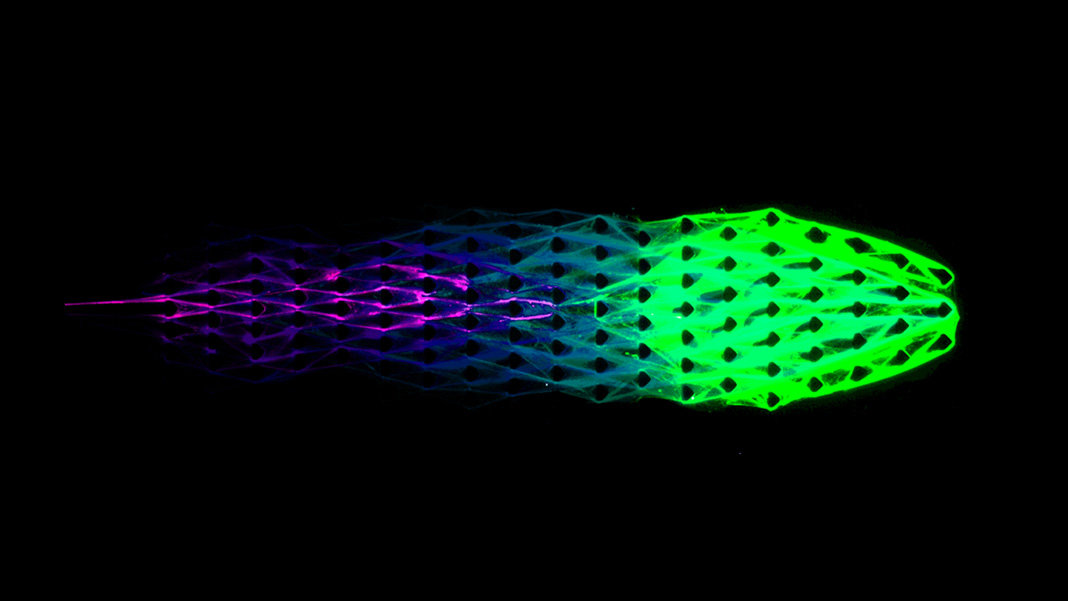 Every living organism is constantly changing: cells divide and die, proteins build and disintegrate, DNA breaks and heals. Life demands metabolism—the simultaneous builder and destroyer of living materials—to continuously upgrade our bodies. That’s how we heal and grow, how we propagate and survive.

What if we could endow cold, static, lifeless robots with the gift of metabolism?

In a study published this month in Science Robotics, an international team developed a DNA-based method that gives raw biomaterials an artificial metabolism. Dubbed DASH—DNA-based assembly and synthesis of hierarchical materials—the method automatically generates “slime”-like nanobots that dynamically move and navigate their environments.

Like humans, the artificial lifelike material used external energy to constantly change the nanobots’ bodies in pre-programmed ways, recycling their DNA-based parts as both waste and raw material for further use. Some “grew” into the shape of molecular double-helixes; others “wrote” the DNA letters inside micro-chips.

The artificial life forms were also rather “competitive”—in quotes, because these molecular machines are not conscious. Yet when pitted against each other, two DASH bots automatically raced forward, crawling in typical slime-mold fashion at a scale easily seen under the microscope—and with some iterations, with the naked human eye.

“Fundamentally, we may be able to change how we create and use the materials with lifelike characteristics. Typically materials and objects we create in general are basically static… one day, we may be able to ‘grow’ objects like houses and maintain their forms and functions autonomously,” said study author Dr. Shogo Hamada to Singularity Hub.

“This is a great study that combines the versatility of DNA nanotechnology with the dynamics of living materials,” said Dr. Job Boekhoven at the Technical University of Munich, who was not involved in the work.

The study builds on previous ideas on how to make molecular Lego blocks that essentially assemble—and destroy—themselves.

Although the inspiration came from biological metabolism, scientists have long hoped to cut their reliance on nature. At its core, metabolism is just a bunch of well-coordinated chemical reactions, programmed by eons of evolution. So why build artificial lifelike materials still tethered by evolution when we can use chemistry to engineer completely new forms of artificial life?

Back in 2015, for example, a team led by Boekhoven described a way to mimic how our cells build their internal “structural beams,” aptly called the cytoskeleton. The key here, unlike many processes in nature, isn’t balance or equilibrium; rather, the team engineered an extremely unstable system that automatically builds—and sustains—assemblies from molecular building blocks when given an external source of chemical energy.

Sound familiar? The team basically built molecular devices that “die” without “food.” Thanks to the laws of thermodynamics (hey ya, Newton!), that energy eventually dissipates, and the shapes automatically begin to break down, completing an artificial “circle of life.”

The new study took the system one step further: rather than just mimicking synthesis, they completed the circle by coupling the building process with dissipative assembly.

Here, the “assembling units themselves are also autonomously created from scratch,” said Hamada.

The process of building DNA nanobots starts on a microfluidic chip.

Decades of research have allowed researchers to optimize DNA assembly outside the body. With the help of catalysts, which help “bind” individual molecules together, the team found that they could easily alter the shape of the self-assembling DNA bots—which formed fiber-like shapes—by changing the structure of the microfluidic chambers.

Computer simulations played a role here too: through both digital simulations and observations under the microscope, the team was able to identify a few critical rules that helped them predict how their molecules self-assemble while navigating a maze of blocking “pillars” and channels carved onto the microchips.

This “enabled a general design strategy for the DASH patterns,” they said.

In particular, the whirling motion of the fluids as they coursed through—and bumped into—ridges in the chips seems to help the DNA molecules “entangle into networks,” the team explained.

These insights helped the team further develop the “destroying” part of metabolism. Similar to linking molecules into DNA chains, their destruction also relies on enzymes.

Once the team pumped both “generation” and “degeneration” enzymes into the microchips, along with raw building blocks, the process was completely autonomous. The simultaneous processes were so lifelike that the team used a metric commonly used in robotics, finite-state automation, to measure the behavior of their DNA nanobots from growth to eventual decay.

“The result is a synthetic structure with features associated with life. These behaviors include locomotion, self-regeneration, and spatiotemporal regulation,” said Boekhoven.

In their next experiments, the team took inspiration from slugs to program undulating movements into their DNA bots. Here, “movement” is actually a sort of illusion: the machines “moved” because their front ends kept regenerating, whereas their back ends degenerated. In essence, the molecular slime was built from linking multiple individual “DNA robot-like” units together: each unit receives a delayed “decay” signal from the head of the slime in a way that allowed the whole artificial “organism” to crawl forward, against the steam of fluid flow.

Here’s the fun part: the team eventually engineered two molecular slime bots and pitted them against each other, Mario Kart-style. In these experiments, the faster moving bot alters the state of its competitor to promote “decay.” This slows down the competitor, allowing the dominant DNA nanoslug to win in a race.

Of course, the end goal isn’t molecular podracing. Rather, the DNA-based bots could easily amplify a given DNA or RNA sequence, making them efficient nano-diagnosticians for viral and other infections.

The lifelike material can basically generate patterns that doctors can directly ‘see’ with their eyes, which makes DNA or RNA molecules from bacteria and viruses extremely easy to detect, the team said.

In the short run, “the detection device with this self-generating material could be applied to many places and help people on site, from farmers to clinics, by providing an easy and accurate way to detect pathogens,” explained Hamaga.

I’m letting my nerd flag fly here. In Avengers: Infinity Wars, the scientist-engineer-philanthropist-playboy Tony Stark unveiled a nanosuit that grew to his contours when needed and automatically healed when damaged.

DASH may one day realize that vision. For now, the team isn’t focused on using the technology for regenerating armor—rather, the dynamic materials could create new protein assemblies or chemical pathways inside living organisms, for example. The team also envisions adding simple sensing and computing mechanisms into the material, which can then easily be thought of as a robot.

Unlike synthetic biology, the goal isn’t to create artificial life. Rather, the team hopes to give lifelike properties to otherwise static materials.

“We are introducing a brand-new, lifelike material concept powered by its very own artificial metabolism. We are not making something that’s alive, but we are creating materials that are much more lifelike than have ever been seen before,” said lead author Dr. Dan Luo.

“Ultimately, our material may allow the construction of self-reproducing machines… artificial metabolism is an important step toward the creation of ‘artificial’ biological systems with dynamic, lifelike capabilities,” added Hamada. “It could open a new frontier in robotics.”

Image Credit: A timelapse image of DASH, by Jeff Tyson at Cornell University.