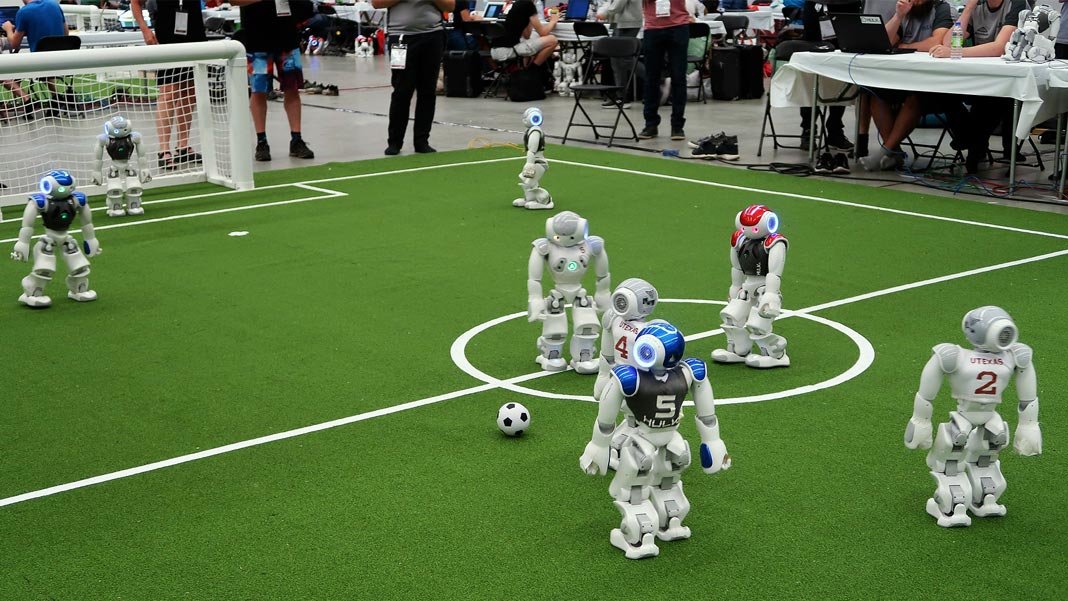 Robot technology is evolving at breakneck speed. SoftBank’s Pepper is found in companies across the globe and is rapidly improving its conversation skills. Telepresence robots open up new opportunities for remote working, while Boston Dynamics’ Handle robot could soon (literally) take a load off human colleagues in warehouses.

But warehouses and offices aren’t the only places where robots are lining up next to humans.

Cue 3 is still some way from being ready to take on Curry, or even amateur basketball players, in a real game. However, it is the latest member of a growing cast of robots challenging human dominance in sports.

As these robots continue to develop, they not only exemplify the speed of exponential technology development, but also how those technologies are improving human capabilities.

The list of robots in sports is surprisingly long and diverse. There are robot skiers, tumblers, soccer players, sumos, and even robot game jockeys. Introductions to a few of them are in order.

Robot: Forpheus
Sport: Table tennis
Intro: Looks like something out of War of the Worlds equipped with a ping pong bat instead of a death ray.
Ability level: Capable of counteracting spin shots and good enough to beat many beginners.

Robot: Sumo bot
Sport: Sumo wrestling
Intro: Hyper-fast, hyper-aggressive. Think robot equivalent to an angry wasp on six cans of Red Bull crossed with a very small tank.
Ability level: Flies around the ring way faster than any human sumo. Tend to drive straight out of the ring at times.

Robot: Cue 3
Sport: Basketball
Intro: Stands at an imposing 6 foot and 10 inches, so pretty much built for the NBA. Looks a bit like something that belongs in a video game.
Ability level: A 62.5 percent three-pointer percentage, which is better than Steph Curry’s; is less mobile than Charles Barkley – in his current form.

Robot: Robo Cup Robots
Intro: The future of soccer. If everything goes to plan, a team of robots will take on the Lionel Messis and Cristiano Ronaldos of 2050 and beat them in a full 11 vs. 11 game.
Ability level: Currently plays soccer more like the six-year-olds I used to coach than Lionel Messi.

The skill level of all the robots above is impressive, and they are doing things that no human contestant can. The sumo bots’ inhuman speed is self-evident. Forpheus’ ability to track the ball with two cameras while simultaneously tracking its opponent with two other cameras requires a look at the spec sheet, but is similarly beyond human capability. While Cue 3 can’t move, it makes shots from the mid-court logo look easy.

Robots are performing at a level that was confined to the realm of science fiction at the start of the millennium. The speed of development indicates that in the near future, my national team soccer coach would likely call up a robot instead of me (he must have lost my number since he hasn’t done so yet. It’s the only logical explanation), and he’d be right to do so.

It is also worth considering that many current sports robots have a humanoid form, which limits their ability. If engineers were to optimize robot design to outperform humans in specific categories, many world champions would likely already be metallic.

Swimming is perhaps one of the most obvious. Even Michael Phelps would struggle to keep up with a torpedo-shaped robot, and if you beefed up a sumo robot to human size, human sumos might impress you by running away from them with a 100-meter speed close to Usain Bolt’s.

In other areas, the playing field for humans and robots is rapidly leveling. One likely candidate for the first head-to-head competitions is racing, where self-driving cars from the Roborace League could perhaps soon be ready to race the likes of Lewis Hamilton.

Perhaps one of the biggest reasons why it may still take some time for robots to surpass us is that they, along with other exponential technologies, are already making us better at sports.

In Japan, elite volleyball players use a robot to practice their attacks. Some American football players also practice against robot opponents and hone their skills using VR.

On the sidelines, AI is being used to analyze and improve athletes’ performance, and we may soon see the first AI coaches, not to mention referees.

We may even compete in games dreamt up by our electronic cousins. SpeedGate, a new game created by an AI by studying 400 different sports, is a prime example of that quickly becoming a possibility.

However, we will likely still need to make the final call on what constitutes a good game. The AI that created SpeedGate reportedly also suggested less suitable pastimes, like underwater parkour and a game that featured exploding frisbees. Both of these could be fun…but only if you’re as sturdy as a robot.