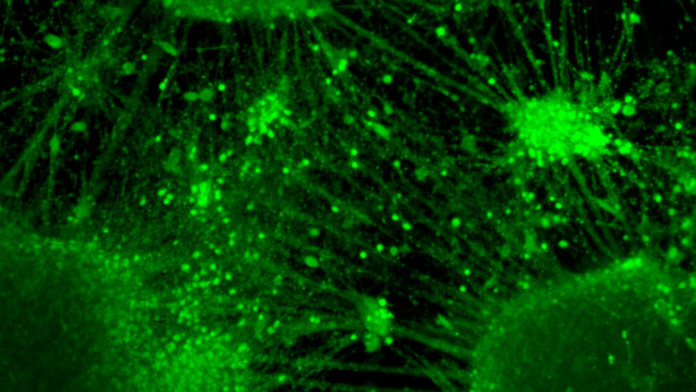 There’s a very un-sexy view of consciousness: our rich, meaningful inner experience of self and other is nothing but electrical and chemical chattering inside our brains.

If you, like many scientists, subscribe to this theory, then a difficult question naturally follows: at what point does electro-chemical activity in dissected brain-like tissue become conscious? Yes, I’m talking about the classic sci-fi “brain in a vat” scenario; no, we are absolutely not there.

But this week, a Japan-led study in Stem Cell Reports is raising some serious red flags. For the first time, a team carefully characterized the electrical chattering of neurons grown from a brain organoid and found that they spontaneously formed long-distance connections that allowed them to fire in synchrony. “Fire together; wire together” is a fundamental testament of learning in neuroscience. Because neurons in lab-grown minibrains can sync up their activity, analogous to how neurons hook up in our brains, it’s possible that the brain nuggets have the capability to support higher cognitive functions when they’re more mature.

To be clear, this does not mean the organoids are conscious, or even that they’re “thinking.” Rather than measuring neural activity from whole mini-brains, the team chemically dissected them to further grow individual neurons in a dish before doing any assays. In other words, they took neurons from a mini-brain, “flattened” their organization onto a plate, and teased out their wirings and chattering in that setup.

How well the results translate to a full-grown mini-brain is anyone’s guess. But the sophistication of the flattened organoid threw the team off guard. Neurons not only formed long-distance connections, they also fired in synchrony while retaining their individual characteristic activity. What’s more, when treated with drugs that either amp up or tone down network strength, the culture responded in kind.

Again, this doesn’t mean that the culture was conscious. Instead, it shows that neurons from cultured mini-brains have the ability to spontaneously develop electrical patterns similar to those that support memory. To the authors, their largest contribution is a new system that will further allow scientists to study their own brain organoid cultures—perhaps those with mutations associated with autism or other complex developmental disorders.

“Because they can mimic cerebral development, cerebral organoids can be used as a substitute for the human brain to study complex developmental and neurological disorders,” said Dr. Jun Takahashi at Kyoto University in a press briefing. “Using our method, it will be possible to analyze cell activity patterns in brain functions to further explore these areas.”

The team set out to comprehensively figure out the mechanics of mini-brain activity. Although it’s possible to monitor neural firing inside a whole mini-brain using a variety of chemical sensors, it’s not easy to understand which neurochemicals are responsible for “broadcasting” electrical firing from one neuron to another.

That’s why the authors went for a drastic approach: rather than keeping mini-brains whole, they dissected out the neurons, “re-potted” them onto a petri dish, and monitored these guys as they further matured into clusters and established connections.

Right off the bat, the team noticed that the neurons were incredibly healthy—they could be kept alive for up to a year, much longer than traditional mini-brain cultures. The clusters formed long-range connections with each other and developed individual identities. Some neurons became excitatory, in that they pumped out chemicals that ramp up the activity of neighboring neurons; others turned inhibitory, in that they damped others’ firing.

A week after transplant, the dissected neural clusters spontaneously formed multiple networks. Using dyes sensitive to neural activity, the team found synchronized waves throughout the network, on top of individual electrical “spikes.” This pattern is reminiscent of how neurons in our brains coordinate when “recording” a memory, the authors explained.

Then, with the help of multiple research drugs, they teased out the major excitatory and inhibitory chemicals in the networks, which happened to be the same as our brains. Artificially blocking neural activity using drugs—similar to those that prevent epilepsy attacks—also prompted the mini-brain neurons to quiet down.

Although scientists previously suspected mini-brain neural networks could encode signal (as opposed to pure noise), under the right circumstances the authors show that they behave as rudimentary human brain connections. That is, at least at the neurochemical level, and after dissection.

“We created a new functional analysis tool to assess the comprehensive dynamic change of network activity in a detected field, which reflected the activities of over 1,000 cells,” explained study author Dr. Hideya Sakaguchi, now at the Salk Institute. “We believe that our work introduces the possibility of a broad assessment of human cell-derived neural activity.”

Grown from natural or induced stem cells, these three-dimensional cultures rapidly expand in rotating vats of growth fluid and oxygen. Although they can be made to resemble many parts of the brain, the most popular is the self-organizing cerebral mini-brain, which grows to resemble the outermost layer of our brain—the cortex. Through sophisticated genomic and molecular analyses, scientists have shown that these tiny nuggets eventually generate the same cast of neurons as a second-trimester fetus, while developing the layer-cake-like structure idiosyncratic to the cortex. Although the nuggets look twisted and Frankensteinein under the microscope, they nevertheless form neural networks that spark with activity.

Because they so resemble fetal brains, cerebral organoids have been viewed as perfect subjects to study neurodevelopmental disorders without ethical conundrums. But in 2018, a team from San Diego transplanted human-sourced mini-brains into mice skulls in hopes of further nurturing them inside a semi-natural environment.

The experiment gave bioethicists the heebie-jeebies: the mini-brain not only matured, but commandeered the mice’s circulatory system to feed themselves; they also formed functional synapses with the mice’s own neurons in a hybrid network that fired together.

The current study further muddles the ethical waters. Although like previous studies, the mini-brain’s electrical activity resembles human brain activity, it’s still hard to say if the two are doing the same thing—that is, whether they’re both supporting coherent electrical signals that underlie thought and consciousness.

Proving that they’re the same will be difficult, partially because researchers know so little about how babies’ brains are wired, and mostly because we still don’t understand how consciousness emerges. One idea is to use a variety of biochemical markers associated with learning to check whether mini-brains can “learn” when presented with new stimulation.

To the Japanese team, the question is moot because mini-brains lack input from the environment. “Consciousness requires subjective experience, and cerebral organoids without sensory tissues will not have sensory input and motor output,” said Sakaguchi.

Yet the issue will no doubt become increasingly thorny as technical improvements allow mini-brains to further develop. If consciousness does spontaneously emerge from complex, recursive wiring in our heads, why wouldn’t it also emerge in sufficiently complex man-grown brains?