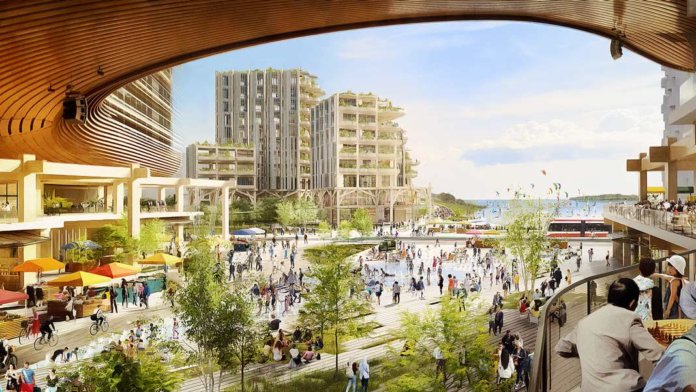 Ever dreamed of living in a giant experiment? If so, Toronto may be the city for you. Sidewalk Labs has released blueprints for its proposed waterfront smart city and, depending who you ask, it’s either going to be the pinnacle of modern living or an Orwellian nightmare.

Cities typically develop in a pretty organic fashion, but the Alphabet subsidiary will be building its vision from the ground up. Since the company won the redevelopment bid a year and a half ago there’s been a steady drip of information, but at the end of last month Sidewalk finally released its 1,500-page master innovation and development plan (MIDP).

Some of the most eye-catching details aren’t new thanks to a leak back in February, but are worth noting. The company plans to make extensive use of timber, including high-rise towers up to 30 stories tall, and buildings will be modular and prefabricated at a factory Sidewalk plans to set up.

Everything will be built to the highest environmental standards, and 80 percent of waste will be diverted from landfills thanks to recycling and composting. Heated cycle lanes and sidewalks will prevent snow buildup, and “building raincoats”—essentially giant bubbly tarps—will also make it possible to keep the many outdoor spaces open even during bad weather.

The city will have ubiquitous 5G internet, green power from solar and geothermal sources, and even a subterranean level populated with robots responsible for delivering freight and removing waste. Most controversially, it will also be peppered with sensors designed to measure every aspect of the city’s functioning and its residents’ behavior.

The plans have been met with skepticism by Waterfront Toronto, the agency set up to oversee the redevelopment, with chair Stephen Diamond saying the two groups had “very different perspectives about what is required for success.”

Among their concerns are a proposed “IDEA district” that outlines a vision to expand beyond the original 12-acre site to encompass a total of 350 acres, and a veiled threat that the whole development hinges on the city stumping up to build a light rail transit extension.

Urban design experts have also raised concerns about Sidewalk’s apparent determination to layer multiple experimental building elements and technologies on top of each other. Many of their proposals are untested or, like timber buildings, require very specific experience and skills to pull off.

But not every idea has to work, writes The Globe and Mail columnist Marcus Gee. Toronto is the fastest growing city in Canada and it desperately needs both space and better ways to manage that growth, says Gee, so it needs the kind of dynamism a company like Sidewalk is offering. “If some of its ideas seem unformed or far-fetched, that is the nature of any experimental venture,” he wrote. “Blue skying is what it is all about.”

The company also plans to build an “urban innovation campus” that would house Google’s new Canadian headquarters, as well as space for new startups. Richard Florida, a professor at the University of Toronto’s School of Cities, wrote that the project would build on the city’s already booming tech industry to give it a leading position in an urban innovation sector projected to be worth $2 trillion in economic activity by 2025.

But the one nagging problem that Sidewalk doesn’t seem to be able to put to bed is privacy. The plan proposes data collection on an unprecedented scale and at never-seen-before granularity at a time when there is increasing distrust of data-driven tech companies.

The company has suggested that all data collected in public spaces would be controlled by an independent trust and Alphabet companies would not get preferential access. But despite releasing a lengthy planning document, the company still hasn’t properly explained exactly what data will be collected.

In a recent report, Ontario’s information and privacy commissioner said the provincial government needs to carry out a comprehensive review of its outdated privacy laws to address the potential risks smart-city technology could entail. And concerns over data harvesting have seen the number of high-profile critics of the project swell.

Whether this ends up being a big enough issue to torpedo the project remains to be seen, but the price of living in the city of the future may be subjecting yourself to 24/7 surveillance. For many, that may well be worth the trade-off.