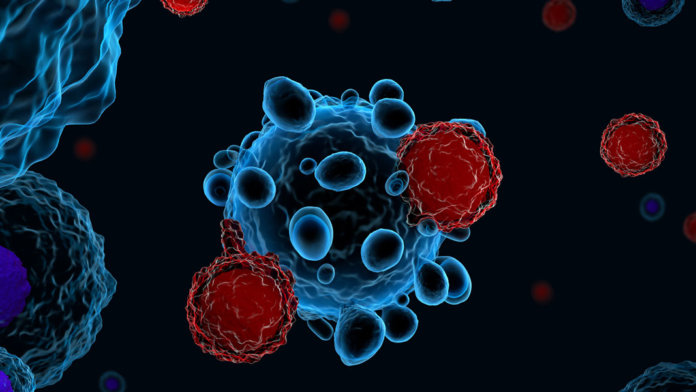 When it comes to battling cancer, our most powerful weapon is also our most dangerous.

You’ve heard of CAR-T: the cellular immunotherapy extracts a patient’s own immune cells, amps up their tumor-hunting prowess using gene therapy, and infuses the super-soldiers back into the patient to pursue and rip their targets to shreds—literally. Since late 2017, the FDA has approved CAR-T therapy for leukemia and lymphoma, deadly childhood cancers generally unmanageable with classic chemotherapy or radiation. In the realm of revolutionary treatments, CAR-T absolutely fits the bill.

But there’s a serious problem.

Unlike traditional chemicals, CAR-T cells are living drugs that further proliferate inside the body. While great for replenishing their cancer-killing troops, it comes with the deadly caveat that the cells may go full-on berserk. Once unleashed, there are few ways to control their activity. In some cases, the good guys turn monstrous, releasing chemicals in a cascade that propel the body into immune overdrive. Left uncontrolled, the result is often fatal.

This week, a collaboration between the University Hospital in Würzburg, Germany and the Memorial Sloan Kettering Cancer Center in New York found an easy and reliable way to slam on the CAR-T brake. Rather than acting on CAR-T cells, the antidote severs downstream actions of the cells, leaving them in a dormant state that can be re-awakened.

The drug, called dasatinib, essentially puts CAR-T on a leash—one strong enough to stop deadly runaway immune reactions in their tracks. Currently approved for some types of leukemia, dasatinib is an old-school drug with over a decade of history and is intimately familiar to the oncology world.

“The evaluation and implementation of dasatinib as an on/off control drug in CAR-T cell immunotherapy should be feasible and straightforward,” the authors wrote. The results were published in Science Translational Medicine, and matched independent conclusions from another team.

A Dial for Killer Cells

Rather than focusing on the cells themselves, the team looked at what happens after CAR-T cells grab onto their target.

As immune cells, CAR-T soldiers already have protein “claws” embedded on their surface that recognize all sorts of invaders such as bacteria. CAR-Ts, however, are further armed with genetically engineered claws that more efficiently hunt down a particular type of tumor.

These claws are short-range weapons. The cells need to physically interact with their target by grabbing onto proteins dotted on the cancer cell’s surface with the claws. This “handshake” causes a cascade of biochemical reactions inside the CAR-T cells, which triggers them to release a hefty cloud of immune chemicals—dubbed cytokines—toxic to the tumor. The end result is rather grisly: the tumor “melts,” literally breaking apart into tiny bio-building-blocks that the body subsequently absorbs or expels.

From previous research, the team noticed that dasatinib quiets down one of the molecules involved in CAR-T’s the chain reaction after the handshake. So it makes sense that blocking the deadly game of telephone can halt CAR-T actions.

They first tested their idea in cultured tumor cells in petri dishes. Using a popular CAR-T recipe—one with high rates of complete remission in recent clinical trials—the team challenged the tumors with their engineered killers, either with or without dasatinib. Remarkably, treatment with the drug completely halted CAR-T’s ability to rip their targets apart. One direct dose worked for hours, and when given multiple doses, the drug could inhibit the cells’ activity for at least a week.

Encouraged, the team tried the drug on several other CAR-T recipes, which all trigger the same downstream reaction. The trick worked every time. It suggests that any CAR-T cells that use this “telephone” pathway can be controlled using dasatinib, the team concluded.

The drug was also tunable and reversible, two extremely powerful traits in pharmaceutics.

Tunable means the drug’s effect depends on dose: like turning a dial, the team can predictably control its inhibitory action by how much they add. And when CAR-Ts need to go back into full force, all the team has to do is sit and wait—literally—for the cell to metabolize the drug away. As soon as the levels drop, CAR-Ts spring back into action with no side effects.

More clinically relevant, the drug didn’t just work in isolated cells; it also worked in mice with tumors. With just two doses, the team was able to keep CAR-T therapy in check. Once they stopped the treatment, CAR-T cells sprung back, and the team again detected their chemical attacks on the tumors. Because CAR-T cells are expensive to engineer, that’s a huge perk. It means that they can linger inside the body awaiting orders, without a full withdrawal of the troops.

An Antidote for Immune Overreaction

Ask any oncologist, and “cytokine storm” is on top of their list for CAR-T dangers. Because these cells proliferate inside the body, they can in some conditions—specifics still unclear—dump a bucketful of toxic immune molecules into the body. This purging action then causes native immune cells to respond in kind, releasing their own cytokines.

“It’s a runaway response,” said Travis Young at the California Institute for Biomedical Research. “There’s no way to control if that patient will have a 100-, a 1,000-, or a 10,000-fold expansion of their CAR-T cells.”

The result is a tornado-scale immune reaction that destroys indiscriminately, tumor or not. In some patients, it’s a death sentence. Because berserk CAR-T cells form the root of the immune tornado, the team tested in mice whether dasatinib can neutralize the deadly side effect. Here, they used a mouse model previously shown to induce an extreme cytokine storm. While all of the tumor-laden mice received CAR-T, some also got a shot of dasatinib three hours later.

Without the antidote, 75 percent of CAR-T infused mice died within two days. With the drug, fatality dropped to 30 percent. It’s not zero, but it does mean that some patients may be saved.

Because dasatinib has been around for over a decade, there’s plenty of data on how human bodies handle the drug. The team believes that popping a pill every six hours—or at even longer intervals—should allow enough drug inside the body to control CAR-T in patients.

This level of control has so far been outside the grasp of oncologists, despite numerous previous ideas. One such suggested method is to build an off switch directly into the cells. Although effective, once activated it also destroys any tumor-killing ability. To continue the treatment, the patient would have to start from scratch.

“As a consequence, physicians and patients have been reluctant to use these safety switches, even when side effects…were severe,” the authors explained.

Another common treatment is steroids. When directly pitted against dasatinib, however, the team found that steroids are slow responders less effective at controlling CAR-T action. Steroids also increase the risk of infections, whereas dasatinib may actually work together with CAR-T to further enhance cancer-treatment efficacy.

To Michael Gilman, CEO of Obsidian Therapeutics based in Massachusetts, the future of CAR-T is bright, not only for blood cancers but also for solid tumors, so long as it’s under control.

“In order for that to happen, these therapies have to be tamed. They have to behave like pharmaceuticals where doses can be controlled and sensitively managed by everyday physicians,” Gilman said.