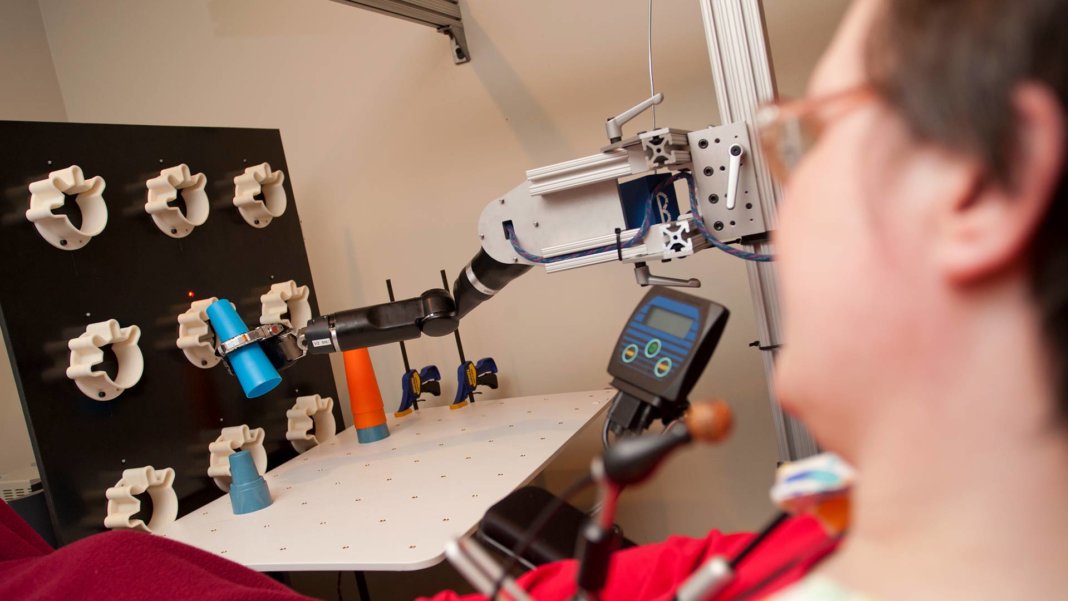 Elon Musk grabbed a lot of attention with his July 16 announcement that his company Neuralink plans to implant electrodes into the brains of people with paralysis by next year. Their first goal is to create assistive technology to help people who can’t move or are unable to communicate.

If you haven’t been paying attention, brain-machine interfaces (BMIs) that allow people to control robotic arms with their thoughts might sound like science fiction. But science and engineering efforts have already turned it into reality.

In a few research labs around the world, scientists and physicians have been implanting devices into the brains of people who have lost the ability to control their arms or hands for over a decade. In our own research group at the University of Pittsburgh, we’ve enabled people with paralyzed arms and hands to control robotic arms that allow them to grasp and move objects with relative ease. They can even experience touch-like sensations from their own hand when the robot grasps objects.

At its core, a BMI is pretty straightforward. In your brain, microscopic cells called neurons are sending signals back and forth to each other all the time. Everything you think, do and feel as you interact with the world around you is the result of the activity of these 80 billion or so neurons.

If you implant a tiny wire very close to one of these neurons, you can record the electrical activity it generates and send it to a computer. Record enough of these signals from the right area of the brain and it becomes possible to control computers, robots, or anything else you might want, simply by thinking about moving. But doing this comes with tremendous technical challenges, especially if you want to record from hundreds or thousands of neurons.

What Neuralink Is Bringing to the Table

Elon Musk founded Neuralink in 2017, aiming to address these challenges and raise the bar for implanted neural interfaces.

Perhaps the most impressive aspect of Neuralink’s system is the breadth and depth of their approach. Building a BMI is inherently interdisciplinary, requiring expertise in electrode design and microfabrication, implantable materials, surgical methods, electronics, packaging, neuroscience, algorithms, medicine, regulatory issues, and more. Neuralink has created a team that spans most, if not all, of these areas.

With all of this expertise, Neuralink is undoubtedly moving the field forward, and improving their technology rapidly. Individually, many of the components of their system represent significant progress along predictable paths. For example, their electrodes, that they call threads, are very small and flexible; many researchers have tried to harness those properties to minimize the chance the brain’s immune response would reject the electrodes after insertion. Neuralink has also developed high-performance miniature electronics,  another focus area for labs working on BMIs.

Often overlooked in academic settings, however, is how an entire system would be efficiently implanted in a brain.

Neuralink’s BMI requires brain surgery. This is because implanted electrodes that are in intimate contact with neurons will always outperform non-invasive electrodes where neurons are far away from the electrodes sitting outside the skull. So, a critical question becomes how to minimize the surgical challenges around getting the device into a brain.

Maybe the most impressive aspect of Neuralink’s announcement was that they created a 3,000-electrode neural interface where electrodes could be implanted at a rate of between 30 and 200 per minute. Each thread of electrodes is implanted by a sophisticated surgical robot that essentially acts like a sewing machine. This all happens while specifically avoiding blood vessels that blanket the surface of the brain. The robotics and imaging that enable this feat, with tight integration to the entire device, is striking.

Neuralink has thought through the challenge of developing a clinically viable BMI from beginning to end in a way that few groups have done, though they acknowledge that many challenges remain as they work towards getting this technology into human patients in the clinic.

Figuring Out What More Electrodes Gets You

The quest for implantable devices with thousands of electrodes is not only the domain of private companies. DARPA, the NIH BRAIN Initiative, and international consortiums are working on neurotechnologies for recording and stimulating in the brain with goals of tens of thousands of electrodes. But what might scientists do with the information from 1,000, 3,000, or maybe even 100,000 neurons?

At some level, devices with more electrodes might not actually be necessary to have a meaningful impact in people’s lives. Effective control of computers for access and communication, of robotic limbs to grasp and move objects as well as of paralyzed muscles is already happening—in people. And it has been for a number of years.

Since the 1990s, the Utah Array, which has just 100 electrodes and is manufactured by Blackrock Microsystems, has been a critical device in neuroscience and clinical research. This electrode array is FDA-cleared for temporary neural recording. Several research groups, including our own, have implanted Utah Arrays in people that lasted multiple years.

Currently, the biggest constraints are related to connectors, electronics, and system-level engineering, not the implanted electrode itself—although increasing the electrodes’ lifespan to more than five years would represent a significant advance. As those technical capabilities improve, it might turn out that the ability to accurately control computers and robots is limited more by scientists’ understanding of what the neurons are saying—that is, the neural code—than by the number of electrodes on the device.

Even the most capable implanted system, and maybe the most capable devices researchers can reasonably imagine, might fall short of the goal of actually augmenting skilled human performance. Nevertheless, Neuralink’s goal of creating better BMIs has the potential to improve the lives of people who can’t move or are unable to communicate. Right now, Musk’s vision of using BMIs to meld physical brains and intelligence with artificial ones is no more than a dream.

So, what does the future look like for Neuralink and other groups creating implantable BMIs? Devices with more electrodes that last longer and are connected to smaller and more powerful wireless electronics are essential. Better devices themselves, however, are insufficient. Continued public and private investment in companies and academic research labs, as well as innovative ways for these groups to work together to share technologies and data, will be necessary to truly advance scientists’ understanding of the brain and deliver on the promise of BMIs to improve peoples’ lives.

While researchers need to keep the future societal implications of advanced neurotechnologies in mind—there’s an essential role for ethicists and regulation—BMIs could be truly transformative as they help more people overcome limitations caused by injury or disease in the brain and body.

2 Connections That Will Unleash a Flood of Human Capital

A Brief Tour Through the Wild West of Neural Interfaces