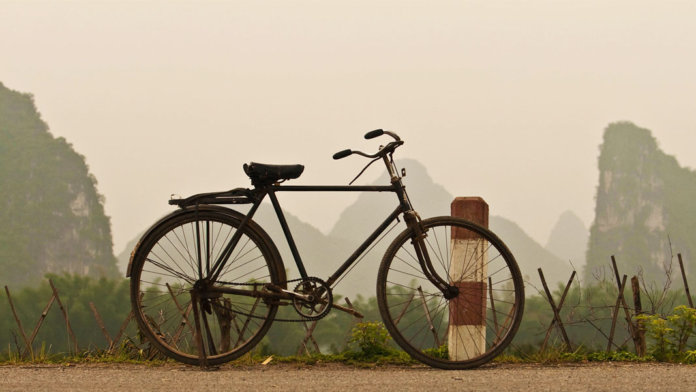 When I lived in Beijing back in the 90s, a man walking his bike was nothing to look at. But today, I did a serious double-take at a video of a bike walking his man.

The bike itself looks overloaded but otherwise completely normal. Underneath its simplicity, however, is a hybrid computer chip that combines brain-inspired circuits with machine learning processes into a computing behemoth. Thanks to its smart chip, the bike self-balances as it gingerly rolls down a paved track before smoothly gaining speed into a jogging pace while navigating dexterously around obstacles. It can even respond to simple voice commands such as “speed up,” “left,” or “straight.”

Far from a circus trick, the bike is a real-world demo of the AI community’s latest attempt at fashioning specialized hardware to keep up with the challenges of machine learning algorithms. The Tianjic (天机*) chip isn’t just your standard neuromorphic chip. Rather, it has the architecture of a brain-like chip, but can also run deep learning algorithms—a match made in heaven that basically mashes together neuro-inspired hardware and software.

The study shows that China is readily nipping at the heels of Google, Facebook, NVIDIA, and other tech behemoths investing in developing new AI chip designs—hell, with billions in government investment it may have already had a head start. A sweeping AI plan from 2017 looks to catch up with the US on AI technology and application by 2020. By 2030, China’s aiming to be the global leader—and a champion for building general AI that matches humans in intellectual competence.

The country’s ambition is reflected in the team’s parting words.

However, the technological core of MOTOBOT and Shi’s bike vastly differ, and that difference reflects two pathways towards more powerful AI. One, exemplified by MOTOBOT, is software—developing brain-like algorithms with increasingly efficient architecture, efficacy, and speed. That sounds great, but deep neural nets demand so many computational resources that general-purpose chips can’t keep up.

As Shi told China Science Daily: “CPUs and other chips are driven by miniaturization technologies based on physics. Transistors might shrink to nanoscale-level in 10, 20 years. But what then?” As more transistors are squeezed onto these chips, efficient cooling becomes a limiting factor in computational speed. Tax them too much, and they melt.

For AI processes to continue, we need better hardware. An increasingly popular idea is to build neuromorphic chips, which resemble the brain from the ground up. IBM’s TrueNorth, for example, contains a massively parallel architecture nothing like the traditional Von Neumann structure of classic CPUs and GPUs. Similar to biological brains, TrueNorth’s memory is stored within “synapses” between physical “neurons” etched onto the chip, which dramatically cuts down on energy consumption.

But even these chips are limited. Because computation is tethered to hardware architecture, most chips resemble just one specific type of brain-inspired network called spiking neural networks (SNNs). Without doubt, neuromorphic chips are highly efficient setups with dynamics similar to biological networks. They also don’t play nicely with deep learning and other software-based AI.

Shi’s new Tianjic chip brought the two incompatibilities together onto a single piece of brainy hardware.

First was to bridge the deep learning and SNN divide. The two have very different computation philosophies and memory organizations, the team said. The biggest difference, however, is that artificial neural networks transform multidimensional data—image pixels, for example—into a single, continuous, multi-bit 0 and 1 stream. In contrast, neurons in SNNs activate using something called “binary spikes” that code for specific activation events in time.

Confused? Yeah, it’s hard to wrap my head around it too. That’s because SNNs act very similarly to our neural networks and nothing like computers. A particular neuron needs to generate an electrical signal (a “spike”) large enough to transfer down to the next one; little blips in signals don’t count. The way they transmit data also heavily depends on how they’re connected, or the network topology. The takeaway: SNNs work pretty differently than deep learning.

Shi’s team first recreated this firing quirk in the language of computers—0s and 1s—so that the coding mechanism would become compatible with deep learning algorithms. They then carefully aligned the step-by-step building blocks of the two models, which allowed them to tease out similarities into a common ground to further build on. “On the basis of this unified abstraction, we built a cross-paradigm neuron scheme,” they said.

In general, the design allowed both computational approaches to share the synapses, where neurons connect and store data, and the dendrites, the outgoing branches of the neurons. In contrast, the neuron body, where signals integrate, was left reconfigurable for each type of computation, as were the input branches. Each building block was combined into a single unified functional core (FCore), which acts like a deep learning/SNN converter depending on its specific setup. Translation: the chip can do both types of previously incompatible computation.

Using nanoscale fabrication, the team arranged 156 FCores, containing roughly 40,000 neurons and 10 million synapses, onto a chip less than a fifth of an inch in length and width. Initial tests showcased the chip’s versatility, in that it can run both SNNs and deep learning algorithms such as the popular convolutional neural network (CNNs) often used in machine vision.

Compared to IBM TrueNorth, the density of Tianjic’s cores increased by 20 percent, speeding up performance ten times and increasing bandwidth at least 100-fold, the team said. When pitted against GPUs, the current hardware darling of machine learning, the chip increased processing throughput up to 100 times, while using just a sliver (1/10,000) of energy.

Although these stats are great, real-life performance is even better as a demo. Here’s where the authors gave their Tianjic brain a body. The team combined one chip with multiple specialized networks to process vision, balance, voice commands, and decision-making in real time. Object detection and target tracking, for example, relied on a deep neural net CNN, whereas voice commands and balance data were recognized using an SNN. The inputs were then integrated inside a neural state machine, which churned out decisions to downstream output modules—for example, controlling the handle bar to turn left.

Thanks to the chip’s brain-like architecture and bilingual ability, Tianjic “allowed all of the neural network models to operate in parallel and realized seamless communication across the models,” the team said. The result is an autonomous bike that rolls after its human, balances across speed bumps, avoids crashing into roadblocks, and answers to voice commands.

“It’s a wonderful demonstration and quite impressive,” said the editorial team at Nature, which published the study on its cover last week.

However, they cautioned, when comparing Tianjic with state-of-the-art chips designed for a single problem toe-to-toe on that particular problem, Tianjic falls behind. But building these jack-of-all-trades hybrid chips is definitely worth the effort. Compared to today’s limited AI, what people really want is artificial general intelligence, which will require new architectures that aren’t designed to solve one particular problem.

Until people start to explore, innovate, and play around with different designs, it’s not clear how we can further progress in the pursuit of general AI. A self-driving bike might not be much to look at, but its hybrid brain is a pretty neat place to start.