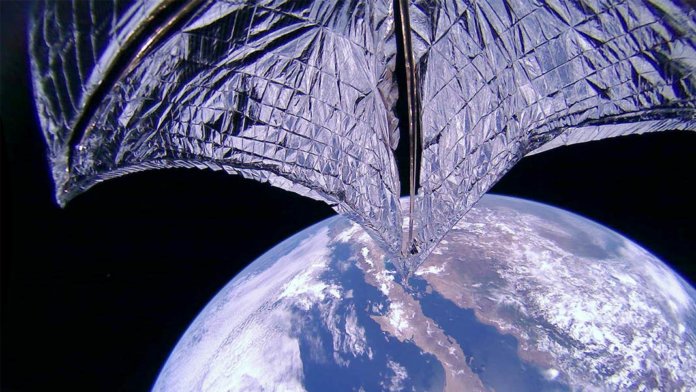 Right now, there’s a piece of reflective fabric about the size of a boxing ring orbiting the Earth. On the surface, it looks like an emergency blanket stretched tight by two tent poles. But underneath that unassuming facade, the fabric—LightSail 2—may be our pathway to the stars.

Developed by the Planetary Society in collaboration with multiple universities, LightSail 2 is a solar sail. Rather than transforming wind power into motion on a sailboat, solar sails use sunlight to roam the cosmos. Although the technology is cutting-edge—LightSail 2 successfully launched just two months ago—the idea’s roots go all the way back to famed astronomer Johannes Kepler in 1608.

Light sails aren’t just a space-geek curiosity. The abundance of solar radiation pressure means that it won’t run out of fuel. Hell, it doesn’t even need to carry any, and so reduces weight on long spaceflight missions or saves it for useful scientific instruments. The constant push of light, though tiny, allows the sail to continue accelerating in the near-vacuum of space. Add in ways to control its orientation, and in theory a sail can reach the far edges of our solar system—or far, far beyond.

This week at the Singularity University Global Summit in San Francisco, Chief Scientist Bruce Betts took the stage and gave us the inside story of how after 400 years, we finally have the first controlled solar sail flight in Earth orbit. Along the way, he painted a brilliant picture of the future of space travel, one that may allow us to eventually deploy fleets of tiny spaceships all over nearby solar systems to explore potentially habitable exoplanets.

A Quirky Intro to Solar Sailing

No one likes a dry science class. In a video introduction to the technology, Betts brought on an animated housefly to help explain the science, garnering chuckles across the audience.

Why a housefly? The force of solar radiation pressure—photons hitting, and then bouncing off a surface—is similar to a housefly landing in the palm of your hand. Both pushes are tiny, and on Earth, the pressure is easily dwarfed by other forces such as drafts of dust in the air. However, the light push becomes far more significant in the near vacuum of space, especially if the sail is large and the cargo weight small.

As long as sunlight doesn’t run out, solar sails can keep accelerating away from the sun and into the wider cosmos in interstellar flight.

The remarkable combo opens up new avenues of space science, especially when combined with CubeSats. These tiny little satellites, each standardized in a housing that’s just four inches across, recently revolutionized space exploration. They’re cheap, lightweight, and after hitching a ride on a rocket, do amazing things like taking a photo of Mars from deep space.

A CubeSat propelled by sunlight is revolutionary, said Betts. It means we can achieve solar monitoring missions that let the spacecraft sit closer to the sun than previously possible. The satellite can then provide more and earlier warnings about impending solar storms that could disrupt sensitive power grids. In addition, rather than shooting spacecrafts up to a single, predetermined orbit, a solar sail can flexibly reach multiple orbits. That could make asteroid exploration far more efficient, potentially letting a single spacecraft “asteroid-hop” instead of going to just one.

In 2005, the Planetary Society launched COSMOS1, a massive sail weighing over 200 pounds. The rocket failed, and the mission was lost. A decade later, the team successfully deployed LightSail 1 a few hundred miles above the Earth, around the altitude of the space station. The sail popped out successfully, but the atmosphere was still heavy enough to drag the sail back.

“We learned a lot, which is to say we had a whole bunch of issues,” said Betts.

Meanwhile, Japan took the title of the first successful controlled solar sail mission in 2010. The JAXA IKAROS deployed on a spacecraft’s journey to Venus, with solar energy panels to generate power and multiple cameras. The problem? It weighed nearly 700 pounds. In contrast, LightSail 2 weighs just 11 pounds.

LightSail 2 is far more ambitious than any of its predecessors. Its goal is to demonstrate controlled CubeSat solar sailing, and that it’s possible to change the satellite’s orbit by controlling the solar sail.

The design heavily replicated its first-generation prototype. The sail itself is made of lightweight reflective material that’s just 1/5,000th of an inch thick. It has four alloy booms that unwind like tape measurers, which unfurl the packed sail when appropriate.

The sail is integrated with the CubeSat inside a metallic dark gray filing cabinet called a P-POD, similar in size to a loaf of bread. At the bottom is the sail and an RF antenna that automatically pops out. To deploy the sail, the four sides of the “cabinet” flip up, exposing solar panels to power electronics and two fish-eye cameras. The cameras together provide the team with a 360-degree panoramic—if somewhat distorted—view of the entire sail and its surrounding space.

The team then stuck the P-POD inside Georgia Tech’s Prox-1 spacecraft and anxiously waited for a week as the carrier, SpaceX’s Falcon Heavy, launched and headed towards orbit.

“We waited tensely, because the sail is inside the spacecraft and there were no communications for a week,” said Betts. “When we saw Morse Code signals that showed the antenna working, there was a room of very happy people,” he added.

The sail deployed successfully on July 23 over a nail-biting two and a half minutes. So far, the spacecraft is healthy, stable without significant tumbling, and it’s communicating well, said Betts as he scrolled through dozens of breathtaking images of the sail and Earth.

Even more impressive, they’ve already changed the orbit of the spacecraft. Based on measurements by the US Air Force, LightSail 2’s orbit is now squished into an elliptical from a circle, with its apogee—the point closest to the sun—increasingly edging further away from Earth.

Meanwhile, the team is still operating. They’re continuing to raise the apogee for as long as possible, and refining controls so the sail performs better. Eventually, when the satellite returns to our atmosphere, the team will also examine de-orbit dynamics as it plummets closer to Earth. The data will help engineer “drag sails,” which could one day help us get rid of all the space debris floating around our planet.

LightSail 2 certainly won’t be the last solar sail. NASA alone has two missions planned, with one scheduled for 2021 to explore an asteroid. Breakthrough Initiatives, a grant launched in 2016, is funding solar sail studies that can eventually reach our nearest neighbor, Alpha Centauri. But to the Planetary Society, the ultimate star-shot destination remains even further.