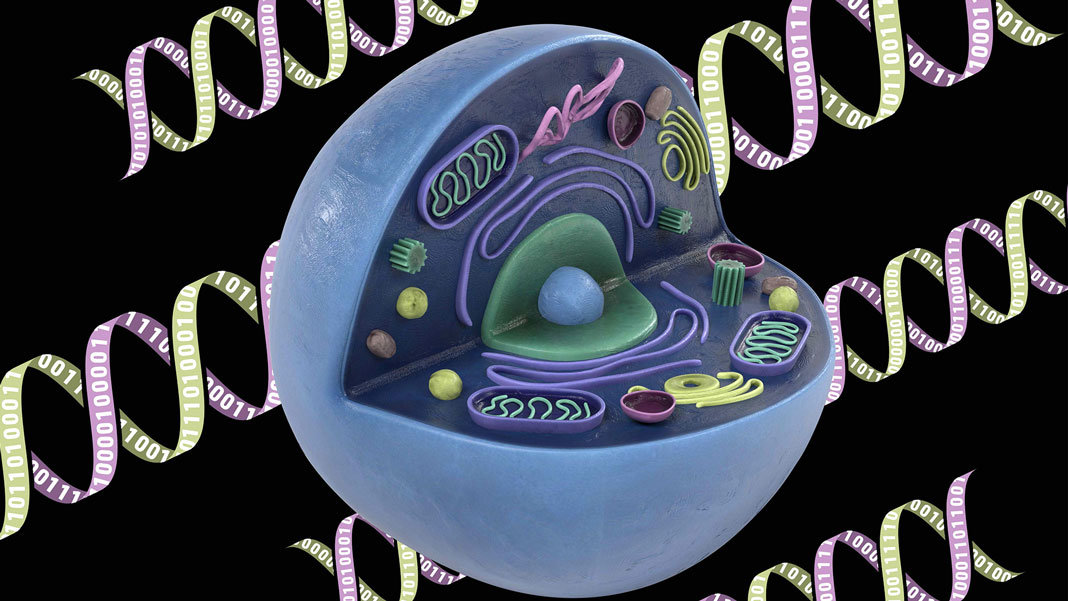 As cells turn to the dark side, a whirlwind of DNA changes gradually accumulate. Like flipping multiple interlinked light switches, the cell gradually changes its internal molecular operations, until its once-beneficial nature turns malevolent. Why, when, and how this sinister transformation happens is still unknown, and cancer only rears its ugly face when it’s often too late.

But what if there’s a way to capture that transformation from the very beginning?

This month, a team at MIT tapped the computational power of DNA to transform it into a minicomputer. Similar to its silicon counterpart, the technology dubbed DOMINO allows cells to read and write life events into single letters in its DNA. Unlike previous generations of cellular recorders that disrupt large chunks of genomic information, DOMINO alters data at the “bit” level. This keeps the cell functional, while massively increasing accuracy and storage capacity. What’s more, scientists can layer the operations using logic gates, essentially turning cells into a computational powerhouse.

At the heart of DOMINO are CRISPR base editors, a relatively new version of the gene editing tool that precisely swap one genetic letter for another. Think of every swap as tapping a computer key—multiplexing swaps lets researchers hit multiple keys in the correct sequence at the right time, and so write a cell’s history straight into its DNA. Sequencing the genome then retrieves the recordings, which can be pieced together into a biological timeline, much like detectives weaving together a series of events in a complicated crime.

“We need better strategies to unravel how complex biology works, especially in diseases like cancer where multiple biological events can occur to transform normal cells into diseased ones,” said Dr. Timothy Lu, who led the study. “This type of biocomputing is an exciting new way of getting and processing information.”

In general, here’s how “cellular cameras” work. Most systems rely on a trigger mechanism to start the recording process, kind of like using a motion detector camera for wildlife videoing to save storage space. When the cell detects a certain life event—a toxin, a particular genetic swap, or a sudden change in its metabolism or internal molecules—it activates the “recorder,” which is a molecular tool that permanently alters the cell’s DNA in a predictable way.

By reading these mutational signatures using DNA sequencing, researchers can then tease out whether a specific event happened or not. This makes molecular recorders incredibly valuable to biotech applications and synthetic biology. For example, a cell could act as an environmental monitoring device in water or soil to detect and record signs of contamination such as heavy metal or pesticide.

A robust, scalable cellular recorder could also be revolutionary to biomedicine. A human cancer or otherwise mutated cell equipped with a “recorder” can provide an entire history of surveillance footage while the cell gets sick, including how its molecules change in their signaling patterns.

Neuroscience also stands to gain. For example, we know that a toxin called MTTP causes healthy neurons to degenerate in a way similar to neurons from a Parkinson’s patient’s brain. Equip them with a cellular recorder, and we may finally be able to unravel the molecular dance that leads to neurons dying—and perhaps how to prevent it.

But cellular recorders have a huge problem: because they permanently change DNA, they quickly run out of bandwidth before the cell’s genome becomes unstable and kill the cell. This makes it almost impossible to track history over long periods. Then there’s the readability roadblock. Most cellular recorders don’t support monitoring DNA memory states on the fly, in that you have to first kill and destroy the cell. It’s similar to smashing your hard drive every time you read the data—not a great way to scale things up.

DOMINO tackles these issues head on. Its secret? The formidable CRISPR base editor. Although there are many types, the version here swaps the DNA letter C to T.

Think of the new recorder as a line of domino pieces. Each piece has two components: one, the guide RNA, the bloodhound that sniffs out and pulls the CRISPR mechanism towards its target. Two, the base editor, which is a version of Cas9 that doesn’t shred the targeted DNA sequence. Unlike classic CRISPR, base editors don’t cut DNA and are much “gentler” on the genome. These smaller and more precise mutations also free up larger areas for information storage—it’s like going from a floppy disk to a TB-level external hard drive. Larger storage capacity, longer timeline.

Similar to previous systems, DOMINO lies dormant inside a cell until a specific event flips it on. Only then does it direct the cell to make its two components, etching the molecular event into DNA in the form of C-to-T swaps.

Here’s the clever part: the team then designed an interlinked system so that a later mutation only occurs if the cell is already mutated previously. Like falling domino pieces, one recording event allows the next one, then another, and so on. This opens DOMINO (aptly named, no?) to multiplexing events in time. “You can engineer CRISPR guide RNAs in such a way that you have to have edit one happen before edit two can happen, before edit three,” explained Lu.

What’s more, multiple guide RNAs can be used together to monitor for different events that biologically synergize: for example, one RNA can “tag” exposure to one chemical linked to cancer, while the other can monitor for a different chemical or radiation. This immediately makes DOMINO a powerful tool to build logic and memory operations such as “AND,” “OR,” and more complicated timeline events like “IF EVER A AND IF EVER B,” or “A AND THEN B,” or “A AND AFTER TIME X THEN B.” You get the point.

If previous cellular recorders suffered from “poker face,” DOMINO’s completely open. Here, the team designed the circuits so that the final readout is in the form of a glowing green protein.

Under the microscope, scientists can then immediately eyeball how strong the green glow is, and quickly estimate how many mutations have accumulated without killing the cell to sequence its DNA. More sophisticated lab tools can quantitatively measure the light’s intensity for an accurate read. That’s why we call it a “non-destructive DNA-state reporter,” the team explained, adding that it makes the system much easier to scale and use in animal models. For example, a recorder that tracks HIV-infected immune cells could only produce a green glow at certain stages of infection, which scientists can monitor by measuring light intensity from blood samples.

So far, the only experiments are proofs-of-concept in the bacteria E. Coli and cultured human cells. But the implications are plenty. For example, a DOMINO circuit could one day detect cancer, and then turn on genes that produce drugs that combat that particular cancer at that specific stage of development.

“Those are applications that may be further away from real-world use but are certainly enabled by this type of technology,” said Lu.