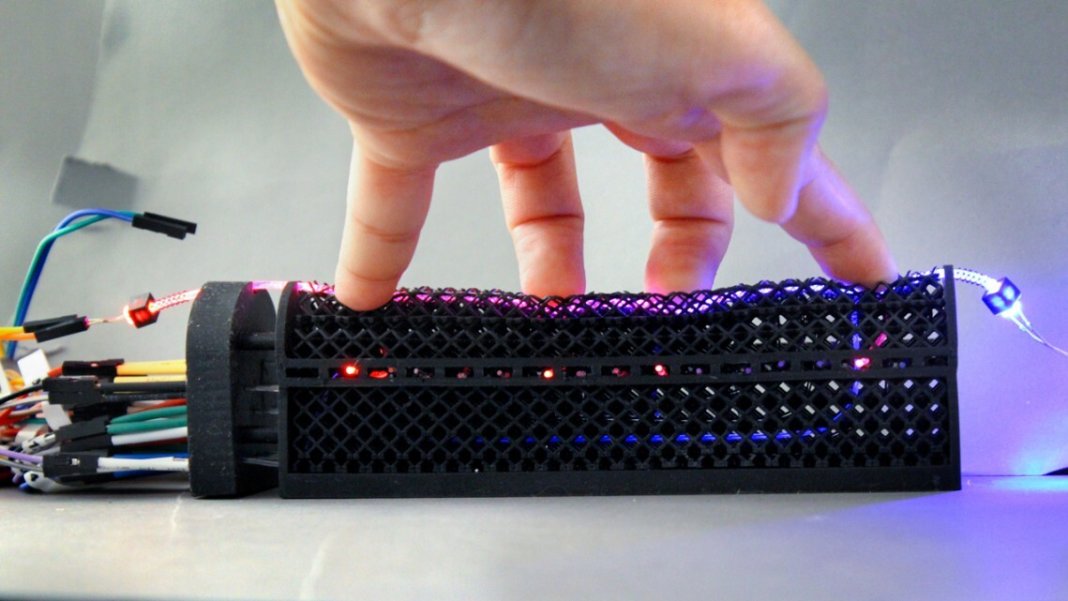 Last night, way past midnight, I stumbled onto my porch blindly grasping for my keys after a hellish day of international travel. Lights were low, I was half-asleep, yet my hand grabbed the keychain, found the lock, and opened the door.

If you’re rolling your eyes—yeah, it’s not exactly an epic feat for a human. Thanks to the intricate wiring between our brain and millions of sensors dotted on—and inside—our skin, we know exactly where our hand is in space and what it’s touching without needing visual confirmation. But this combined sense of the internal and the external is completely lost to robots, which generally rely on computer vision or surface mechanosensors to track their movements and their interaction with the outside world. It’s not always a winning strategy.

What if, instead, we could give robots an artificial nervous system?

This month, a team led by Dr. Rob Shepard at Cornell University did just that, with a seriously clever twist. Rather than mimicking the electric signals in our nervous system, his team turned to light. By embedding optical fibers inside a 3D printed stretchable material, the team engineered an “optical lace” that can detect changes in pressure less than a fraction of a pound, and pinpoint the location to a spot half the width of a tiny needle.

The invention isn’t just an artificial skin. Instead, the delicate fibers can be distributed both inside a robot and on its surface, giving it both a sense of tactile touch and—most importantly—an idea of its own body position in space. Optical lace isn’t a superficial coating of mechanical sensors; it’s an entire platform that may finally endow robots with nerve-like networks throughout the body.

Eventually, engineers hope to use this fleshy, washable material to coat the sharp, cold metal interior of current robots, transforming C-3PO more into the human-like hosts of Westworld. Robots with a “bodily” sense could act as better caretakers for the elderly, said Shepard, because they can assist fragile people without inadvertently bruising or otherwise harming them. The results were published in Science Robotics.

The optical lace is especially creative because it marries two contrasting ideas: one biological-inspired, the other wholly alien.

The overarching idea for optical lace is based on the animal kingdom. Through sight, hearing, smell, taste, touch, and other senses, we’re able to interpret the outside world—something scientists call exteroception. Thanks to our nervous system, we perform these computations subconsciously, allowing us to constantly “perceive” what’s going on around us.

Our other perception is purely internal. Proprioception (sorry, it’s not called “inception” though it should be) is how we know where our body parts are in space without having to look at them, which lets us perform complex tasks when blind. Although less intuitive than exteroception, proprioception also relies on stretching and other deformations within the muscles and tendons and receptors under the skin, which generate electrical currents that shoot up into the brain for further interpretation.

In other words, in theory it’s possible to recreate both perceptions with a single information-carrying system.

Here’s where the alien factor comes in. Rather than using electrical properties, the team turned to light as their data carrier. They had good reason. “Compared with electricity, light carries information faster and with higher data densities,” the team explained. Light can also transmit in multiple directions simultaneously, and is less susceptible to electromagnetic interference. Although optical nervous systems don’t exist in the biological world, the team decided to improve on Mother Nature and give it a shot.

The construction starts with engineering a “sheath” for the optical nerve fibers. The team first used an elastic polyurethane—a synthetic material used in foam cushioning, for example—to make a lattice structure filled with large pores, somewhat like a lattice pie crust. Thanks to rapid, high-resolution 3D printing, the scaffold can have different stiffness from top to bottom. To increase sensitivity to the outside world, the team made the top of the lattice soft and pliable, to better transfer force to mechanical sensors. In contrast, the “deeper” regions held their structure better, and kept their structure under pressure.

Now the fun part. The team next threaded stretchable “light guides” into the scaffold. These fibers transmit photons, and are illuminated with a blue LED light. One, the input light guide, ran horizontally across the soft top part of the scaffold. Others ran perpendicular to the input in a “U” shape, going from more surface regions to deeper ones. These are the output guides. The architecture loosely resembles the wiring in our skin and flesh.

As a proof-of-concept for proprioception, the team made a cylindrical lace with one input and 12 output channels. They varied the stiffness of the scaffold along the cylinder, and by pressing down at different points, were able to calculate how much each part stretched and deformed—a prominent precursor to knowing where different regions of the structure are moving in space. It’s a very rudimentary sort of proprioception, but one that will become more sophisticated with increasing numbers of strategically-placed mechanosensors.

The test for exteroception was a whole lot stranger. Here, the team engineered another optical lace with 15 output channels and turned it into a squishy piano. When pressed down, an Arduino microcontroller translated light output signals into sound based on the position of each touch. The stronger the pressure, the louder the volume. While not a musical masterpiece, the demo proved their point: the optical lace faithfully reported the strength and location of each touch.

Although remarkably novel, the optical lace isn’t yet ready for prime time. One problem is scalability: because of light loss, the material is limited to a certain size. However, rather than coating an entire robot, it may help to add optical lace to body parts where perception is critical—for example, fingertips and hands.

The team sees plenty of potential to keep developing the artificial flesh. Depending on particular needs, both the light guides and scaffold can be modified for sensitivity, spatial resolution, and accuracy. Multiple optical fibers that measure for different aspects—pressure, pain, temperature—can potentially be embedded in the same region, giving robots a multitude of senses.

In this way, we hope to reduce the number of electronics and combine signals from multiple sensors without losing information, the authors said. By taking inspiration from biological networks, it may even be possible to use various inputs through an optical lace to control how the robot behaves, closing the loop from sensation to action.

Image Credit: Cornell Organic Robotics Lab. A flexible, porous lattice structure is threaded with stretchable optical fibers containing more than a dozen mechanosensors and attached to an LED light. When the lattice structure is pressed, the sensors pinpoint changes in the photon flow.