Sensors and Machine Learning Are Giving Robots a Sixth Sense 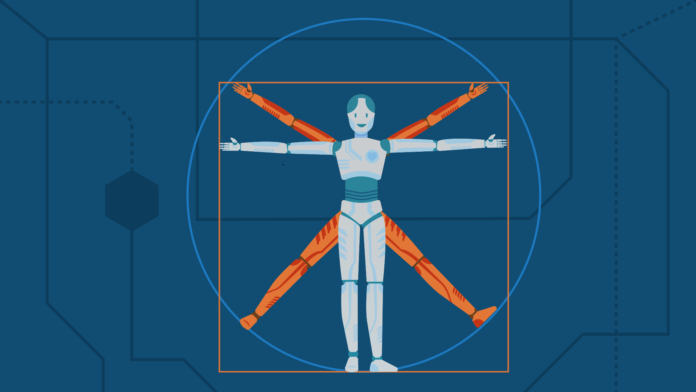 According to some scientists, humans really do have a sixth sense. There’s nothing supernatural about it: the sense of proprioception tells you about the relative positions of your limbs and the rest of your body. Close your eyes, block out all sound, and you can still use this internal “map” of your external body to locate your muscles and body parts – you have an innate sense of the distances between them, and the perception of how they’re moving, above and beyond your sense of touch.

This sense is invaluable for allowing us to coordinate our movements. In humans, the brain integrates senses including touch, heat, and the tension in muscle spindles to allow us to build up this map.

Replicating this complex sense has posed a great challenge for roboticists. We can imagine simulating the sense of sight with cameras, sound with microphones, or touch with pressure-pads. Robots with chemical sensors could be far more accurate than us in smell and taste, but building in proprioception, the robot’s sense of itself and its body, is far more difficult, and is a large part of why humanoid robots are so tricky to get right.

Simultaneous localization and mapping (SLAM) software allows robots to use their own senses to build up a picture of their surroundings and environment, but they’d need a keen sense of the position of their own bodies to interact with it. If something unexpected happens, or in dark environments where primary senses are not available, robots can struggle to keep track of their own position and orientation. For human-robot interaction, wearable robotics, and delicate applications like surgery, tiny differences can be extremely important.

In the case of hard robotics, this is generally solved by using a series of strain and pressure sensors in each joint, which allow the robot to determine how its limbs are positioned. That works fine for rigid robots with a limited number of joints, but for softer, more flexible robots, this information is limited. Roboticists are faced with a dilemma: a vast, complex array of sensors for every degree of freedom in the robot’s movement, or limited skill in proprioception?

New techniques, often involving new arrays of sensory material and machine-learning algorithms to fill in the gaps, are starting to tackle this problem. Take the work of Thomas George Thuruthel and colleagues in Pisa and San Diego, who draw inspiration from the proprioception of humans. In a new paper in Science Robotics, they describe the use of soft sensors distributed through a robotic finger at random. This placement is much like the constant adaptation of sensors in humans and animals, rather than relying on feedback from a limited number of positions.

The sensors allow the soft robot to react to touch and pressure in many different locations, forming a map of itself as it contorts into complicated positions. The machine-learning algorithm serves to interpret the signals from the randomly-distributed sensors: as the finger moves around, it’s observed by a motion capture system. After training the robot’s neural network, it can associate the feedback from the sensors with the position of the finger detected in the motion-capture system, which can then be discarded. The robot observes its own motions to understand the shapes that its soft body can take, and translate them into the language of these soft sensors.

“The advantages of our approach are the ability to predict complex motions and forces that the soft robot experiences (which is difficult with traditional methods) and the fact that it can be applied to multiple types of actuators and sensors,” said Michael Tolley of the University of California San Diego. “Our method also includes redundant sensors, which improves the overall robustness of our predictions.”

The use of machine learning lets the roboticists come up with a reliable model for this complex, non-linear system of motions for the actuators, something difficult to do by directly calculating the expected motion of the soft-bot. It also resembles the human system of proprioception, built on redundant sensors that change and shift in position as we age.

In Search of a Perfect Arm

Another approach to training robots in using their bodies comes from Robert Kwiatkowski and Hod Lipson of Columbia University in New York. In their paper “Task-agnostic self-modeling machines,” also recently published in Science Robotics, they describe a new type of robotic arm.

Robotic arms and hands are getting increasingly dexterous, but training them to grasp a large array of objects and perform many different tasks can be an arduous process. It’s also an extremely valuable skill to get right: Amazon is highly interested in the perfect robot arm. Google hooked together an array of over a dozen robot arms so that they could share information about grasping new objects, in part to cut down on training time.

Individually training a robot arm to perform every individual task takes time and reduces the adaptability of your robot: either you need an ML algorithm with a huge dataset of experiences, or, even worse, you need to hard-code thousands of different motions. Kwiatkowski and Lipson attempt to overcome this by developing a robotic system that has a “strong sense of self”: a model of its own size, shape, and motions.

They do this using deep machine learning. The robot begins with no prior knowledge of its own shape or the underlying physics of its motion. It then repeats a series of a thousand random trajectories, recording the motion of its arm. Kwiatkowski and Lipson compare this to a baby in the first year of life observing the motions of its own hands and limbs, fascinated by picking up and manipulating objects.

Again, once the robot has trained itself to interpret these signals and build up a robust model of its own body, it’s ready for the next stage. Using that deep-learning algorithm, the researchers then ask the robot to design strategies to accomplish simple pick-up and place and handwriting tasks. Rather than laboriously and narrowly training itself for each individual task, limiting its abilities to a very narrow set of circumstances, the robot can now strategize how to use its arm for a much wider range of situations, with no additional task-specific training.

In a further experiment, the researchers replaced part of the arm with a “deformed” component, intended to simulate what might happen if the robot was damaged. The robot can then detect that something’s up and “reconfigure” itself, reconstructing its self-model by going through the training exercises once again; it was then able to perform the same tasks with only a small reduction in accuracy.

Machine learning techniques are opening up the field of robotics in ways we’ve never seen before. Combining them with our understanding of how humans and other animals are able to sense and interact with the world around us is bringing robotics closer and closer to becoming truly flexible and adaptable, and, eventually, omnipresent.

But before they can get out and shape the world, as these studies show, they will need to understand themselves.