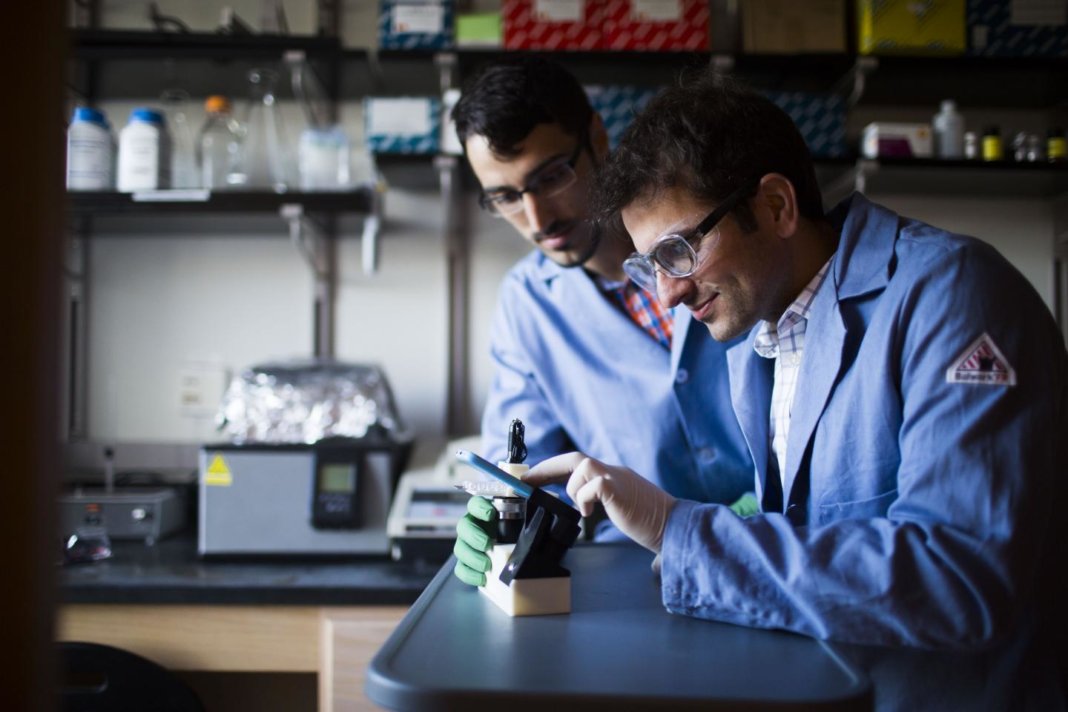 When I imagine the inner workings of a robot, I think hard, cold mechanics running on physics: shafts, wheels, gears. Human bodies, in contrast, are more of a contained molecular soup operating on the principles of biochemistry.

Yet similar to robots, our cells are also attuned to mechanical forces—just at a much smaller scale. Tiny pushes and pulls, for example, can urge stem cells to continue dividing, or nudge them into maturity to replace broken tissues. Chemistry isn’t king when it comes to governing our bodies; physical forces are similarly powerful. The problem is how to tap into them.

In a new perspectives article in Science, Dr. Khalid Salaita and graduate student Aaron Blanchard from Emory University in Atlanta point to DNA as the solution. The team painted a futuristic picture of DNA mechanotechnology, in which we use DNA machines to control our biology. Rather than a toxic chemotherapy drip, for example, a cancer patient may one day be injected with DNA nanodevices that help their immune cells better grab onto—and snuff out—cancerous ones.

“For a long time,” said Salaita, “scientists have been good at making micro devices, hundreds of times smaller than the width of a human hair. It’s been more challenging to make functional nano devices, thousands of times smaller than that. But using DNA as the component parts is making it possible to build extremely elaborate nano devices because the DNA parts self-assemble.”

Just as the steam engine propelled civilization through the first industrial revolution, DNA devices may fundamentally change medicine, biological research, and the development of biomaterials, further merging man and machine.

When picturing a tiny, whirling machine surveying the body, DNA probably isn’t the first candidate that comes to mind. Made up of long chains of four letters—A, T, C, and G—DNA is normally secluded inside a tiny porous “cage” in every cell, in the shape of long chains wrapped around a protein “core.”

Yet several properties make DNA a fascinating substrate for making mechano-machines, the authors said. One is its predictability: like soulmates, A always binds to T, and C with G. This chemical linking in turn forms the famous double helix structure. By giving the letters little chemical additions, or swapping them out altogether with unnatural synthetic letters, scientists have been able to form entirely new DNA assemblies, folded into various 3D structures.

Rather than an unbreakable, immutable chain, DNA components are more like Japanese origami paper, or Lego blocks. While they can’t make every single shape—try building a completely spherical Death Star out of Lego—the chemistry is flexible enough that scientists can tweak its structure, stiffness, and coiling by shifting around the letters or replacing them with entirely new ones.

The Rise of DNA Machines

In the late fall of 1980, Dr. Nadrian Seeman was relaxing at the campus pub at New York University when he noticed a mind-bending woodcut, Depth, by MC Escher. With a spark of insight, he realized that he could form similar lattice shapes using DNA, which would make it a lot easier for him to study the molecule’s shape. More than a decade later, his lab engineered the first artificial 3D nanostructure—a cube made out of DNA molecules. The field of DNA nanotechnology was born.

Then came the DNA revolution. Reading and writing the molecule from scratch became increasingly cheaper, making it easier to experiment with brand-new designs. Additional chemical or fluorescent tags or other modifications gave scientists a direct view of their creations. Rather than a fringe academic pursuit, DNA origami became accessible to most labs, and the number of devices rapidly exploded—devices that can sense, transmit, and generate mechanical forces inside cells.

“If you put together these three main components of mechanical devices, you begin to get hammers and cogs and wheels and you can start building nano machines,” said Salaita.

Salaita is among several dozen labs demoing the practical uses of DNA devices.

For example, our cells are full of long-haul driver proteins that carry nutrients and other cargo throughout their interior by following specific highways (it eerily looks like a person walking down a tightrope). Just as too much traffic damages our roadways, changes in our cells’ logistical players can also harm the cell’s skeleton. Here, scientists have used DNA “handles” to measure force-induced changes like stretching, unfolding, and rupture of molecules involved in our cells’ distribution system to look for signs of trouble.

Then there are DNA tension sensors, which act like scales and other force gauges in our macroscopic world. Made up of a stretchable DNA “spring” to extend with force, and a fluorescent “ruler” that measures the extension, each sensor is anchored at one end (generally, the glass bottom of a Petri dish) and binds to a cell at the other. If the pulling force exceeds a certain threshold, the “spring” unfolds and quenches the fluorescent light in the ruler, giving scientists a warning that the cellular tugging is too strong.

The work may sound abstruse, but its implications are plenty. One is for CAR-T, the revolutionary cancer treatment that uses gene therapy to amp up immune cells with better “graspers” to target tumor cells. The “kiss of death” between graspers and tumors are extremely difficult to measure because it’s light and fleeting. Using a DNA tension sensor, the team was able to track the force during the interaction, which could help scientists engineer better CAR-T therapies. A similar construct, the DNA tension gauge tether, irreversibly ruptures under too much force. The gauge is used to track how stem cells develop into brain cells under mechanical forces, and how immune cells track down and recognize foreign invasion.

“[Immune] T cells are constantly sampling cells throughout your body using these mechanical tugs. They bind and pull on proteins on a cell’s surface and, if the bond is strong, that’s a signal that the T cell has found a foreign agent,” explained Salaita. DNA devices provide an unprecedented look at these forces in the immune system, which in turn could predict how strongly the body will mount an immune response.

To the authors, however, the most promising emerging DNA devices don’t just observe—they can also generate forces. DNA walkers, for example, uses DNA feet to transport (and sort) molecular cargo while walking down a track also made of DNA strands. When the feet “bind” to the “track” (A to T, C to G), it releases energy that propel the walker forward.

Even more exciting are self-assembling DNA machines. The field has DNA-based devices that “transmit, sense and generate mechanical forces,” the authors said. But eventually, their integration will produce nanomachines that “exert mechanical control over living systems.”

Several hiccups do stand in the way. Like other biomolecules, foreign DNA can be chopped up by the body’s immune system as an “invader.” However, the team believes that the limitation won’t be a problem in the next few years as biochemistry develops chemically-modified artificial DNA letters that resist the body’s scissors.

Another problem is that the DNA devices can generate very little force—less than a billionth the weight of a paperclip, which is a little too low to efficiently control forces in our cells. The authors have a solution here too: coupling many force-generating DNA units together, or engineer “translators” that can turn electrical energy into mechanical force—similar to the way our muscles work.

Fundamentally, any advancements in DNA mechanotechnology won’t just benefit medicine; they will also feed back into the design of nanomaterials. The “techniques, tools and design principles…are not specific” to DNA, the authors said. Add in computer-aided design templates, similar to those used in 3D printing, and “potentially anyone can dream up a nano-machine design and make it a reality,” said Salaita.

Image Credit: Emory University. DNA mechanotechnology expands the opportunities for research involving biomedicine and materials sciences, says Khalid Salaita, right, professor of chemistry at Emory University and co-author of the article, along with Aaron Blanchard, left, a graduate student in the Salaita Lab.