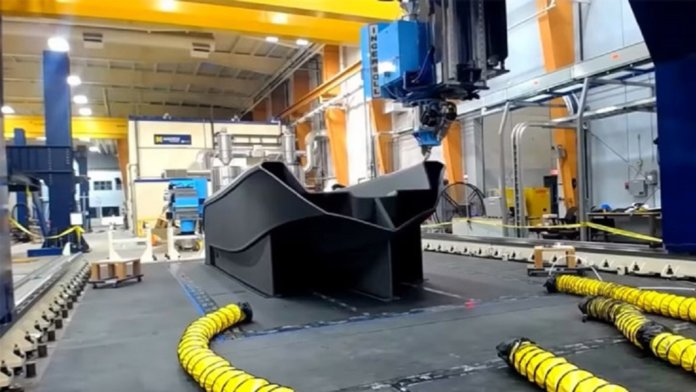 There’s a new technological answer to the iconic line “you’re going to need a bigger boat” from Jaws: 3D printing one.

Last month, the University of Maine revealed 3Dirigo, a 25-foot, 5,000-pound boat that set new records for the world’s largest solid 3D-printed object and largest 3D-printed vessel. Incidentally, it was created by the new titleholder of the largest prototype polymer 3D printer belt. If there isn’t a belt to go with the title, the printer in question can surely print one in XXXL-size.

3Dirigo was printed in just three days. Dr. Habib Dagher, Executive Director of the University of Maine’s Advanced Structures & Composites Center, told CNBC that a typical development and manufacturing process for a craft of similar size “could take months or even a year.”

The speed of production and sheer size of the finished product illustrate how many 3D printing processes are climbing out of the Trough of Disappointment in Gartner’s (in)famous Hype Cycle. Increasing development speed and new use cases point towards further advances in the coming few years.

Industries All Aboard for 3D Printers

While 3Dirigo itself is impressive, it will not necessarily hold on to all its records for long. The University of Maine’s new Big Area Additive Manufacturing Machine (BAAM) 3D printer is designed to print objects up to 100 feet long by 22 feet wide by 10 feet high, with a top printing speed of 500 pounds per hour. BAAM is a one-of-a-kind printer, and it will be used in connection with a variety of research and production initiatives, including rapid prototyping of civilian, defense, and infrastructure applications.

The increase in printing sizes is likely a contributing factor to companies and organizations busily integrating 3D printers of all sizes in their setups. A report from Deloitte estimates that large public companies will spend more than $2.7 billion on 3D printing—including enterprise 3D printers, materials, and services—in 2019. In 2020, the figure will climb to more than $3 billion. 80 percent of enterprises taking part in a Sculpteo questionnaire said that 3D printing is enabling them to innovate faster. 51 percent of the interviewed enterprises said they’re already actively using 3D printing in production.

Early on in the lifetime of 3D printers, speed and precision were like opposing forces; you couldn’t have both. Since then, much has changed, and continues to do so. Australian 3D printer manufacturer Aurora’s RMP-1 provides a good example. It can print up to 350kg of material (metal) a day, which is a 2,000 percent increase in speed over its previous model.

Printing speeds could be about to get into warp territory thanks to several ongoing projects.

A group at the University of Michigan is using light and photoreactive resin to 3D print objects at speeds up to 100 times faster than traditional methods. A little further east, MIT professors Jamison Go and John Hart are working on 3D printing hardware called FastFFF (Fast Fused Filament Fabrication). The hardware can print at ten times the speed most 3D printers work at today and can use biodegradable cellulose instead of plastics.

Incidentally, cellulose is just one of an ever-growing multitude of materials 3D printers can use today.

Speed and material flexibility are core to creating new use cases and leading to advances across industries.

One recent project uses a building block approach to creating whole organs. Much-famed Beyond Meat is soon going to have competition from Israeli startup Redefine Meat, who is printing a mix of fat, water, and plant fibers into something that will have the shape, texture, and taste of meat.

Another area where we are seeing rapid advances is 3D printing construction elements, and in some cases whole buildings. Like with boats, the process can be at least as fast as constructing a building by traditional methods. At last year’s South By Southwest festival, the start-up ICON showcased just that in the form of a 650-square-foot 3D printed house that cost under $10,000 and took under 24 hours to complete.

Is the Future Walking 3D Printers?

Although 3D printing’s advances are impressive, they’re unlikely to become the only way we produce things. Even with their new abilities, 3D printers will likely struggle to compete with traditional productions methods for jobs like printing out 100,000 identical spoons or metal-stamping a million identical parts. However, 3D printing is making it easier to create innovative products faster, tailor and customize products, and lower time-to-market.

As is often the case, it’s in combination with other exponential technologies that the printers could reach their full potential. For example, if we were to combine 3D printers with robots and let them loose. Imagine, as Danish GXN Innovation, The Danish AM Hub, and Map Architects did, mobile 3D printers capable of autonomous crawling, swimming, or flying, producing necessary parts on spec wherever they go.

If this nutty-sounding vision comes to pass, we’ll be seeing stranger things than boats churning out of 3D printers. But then again, if you’d heard just 10 years ago that a 25-foot boat was going to be made by a printer, you’d never have believed it.