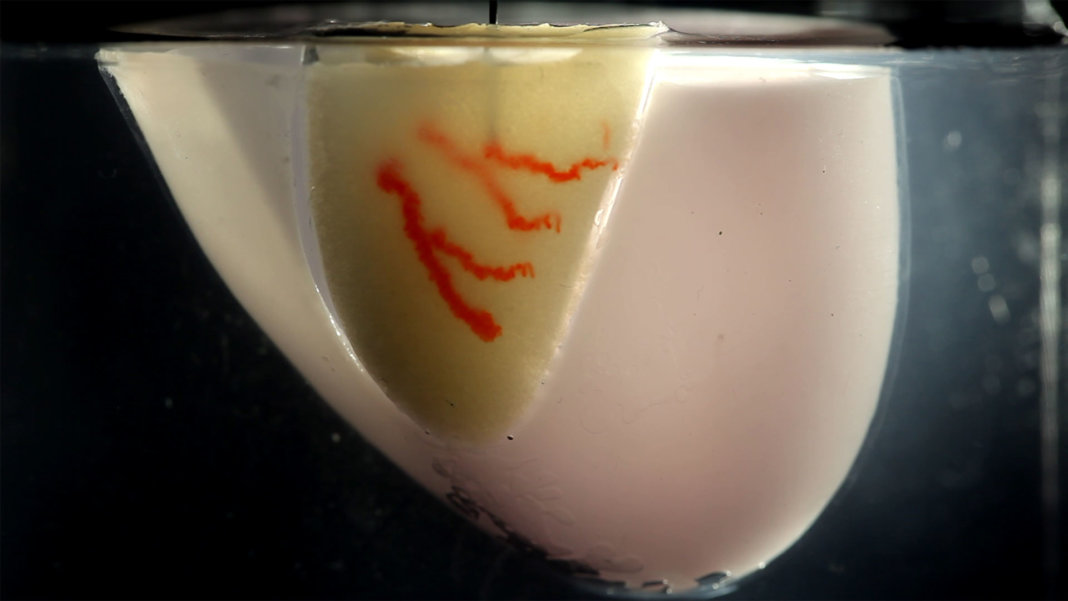 Blood vessels are the lifeline of any organ.

The dense web of channels, spread across tissues like a spider web, allow oxygen and nutrients to reach the deepest cores of our hearts, brains, and lungs. Without a viable blood supply, tissues rot from the inside. For any attempt at 3D printing viable organs, scientists have to tackle the problem of embedding millions of delicate blood vessels throughout their creation.

It’s a hideously hard problem. Although blood vessels generally resemble tree-like branches, their distribution, quantity, size, and specific structure vastly differs between people. So far, the easiest approach is to wash out cells from donated organs and repopulate the structure with recipient cells—a method that lowers immunorejection after transplant. Unfortunately, this approach still requires donor organs, and with 20 people in the US dying every day waiting for an organ transplant, it’s not a great solution.

This week, a team from Harvard University took a stab at the impossible. Rather than printing an entire organ, they took a Lego-block-like approach, making organ building blocks (OBBs) with remarkably high density of patient cells, and assembled the blocks into a “living” environment. From there, they injected a “sacrificial ink” into the proto-tissue. Similar to pottery clay, the “ink” hardens upon curing—leaving a dense, interconnected 3D network of channels for blood to run through.

As a proof of concept, the team printed heart tissue using the strategy. Once the block fused, the lab-made chunk of heart could beat in synchrony and remained healthy for at least a week.

The technology, SWIFT (an eyebrow-raising backcronym of “sacrificial writing into functional tissue”), is a creative push into a new generation of 3D biofabrication. Although OBBs have been around, the team explained, little attention was previously paid to putting the Lego pieces together with blood vessels.

“This is an entirely new paradigm for tissue fabrication,” said study author Dr. Mark Skylar-Scott. The focus is on vessels, which will support 3D printed living tissue that may eventually be used to repair damaged parts of a natural body, or even replace entire human organs with lab-grown versions, he added.

“[It’s] beautiful work,” commented tissue engineer Dr. Jordan Miller at Rice University, who was not involved in the study.

You’ve heard of organoids. Often dubbed mini-organs, these lentil-sized blobs of tissue remarkably mimic particular aspects of entire organs—brain organoids, for example, show the characteristic nerve cell types of firings of a preemie baby. The cellular inhabitants that make up organoids are what especially caught the team’s attention: most are grown from induced pluripotent stem cells (iPSCs), which are often skin cells “de-aged” in a way that they can develop into almost any cell type with a little chemical prodding.

Because organoids are built from a patient’s own cells, they’re completely compatible with the host for an immune standpoint. That particular strength caught the team’s attention: organoids, they reasoned, make the “ideal” OBB—or Lego pieces—to biomanufacture patient- and organ-specific tissues with all the desired properties.

For example, the team explained, organoids are packed with a high density of cells, which is usually hard to achieve with traditional 3D tissue printing. Under the right conditions, they also develop similarly to real organs in terms of cellular composition and microarchitecture to support function…for about a year. Without a blood vessel network, all organoids die.

Here’s where lost-wax technique comes in.

First, a very brief explainer. Throughout the Renaissance, the majority of Italian sculptors used the technique to fabricate bronze statues. In the simplest method, a statuette is first modeled in beeswax and covered in potter’s clay. Once dried, the assembly is heated—the clay is “fired” into ceramics, and the wax melts and flows away (hence, “lost”). Once cooled, the entire project is now a hollow ceramic mold, through which the artist can pour in molten metal.

Now, replace beeswax with “sacrificial bio-ink,” and that’s pretty much how SWIFT carves out its intricate tunnels of blood vessels.

The entire fabrication process is two main steps. The team first grew hundreds of thousands of proto-organoids inside culture dishes. These tiny blobs are so small they don’t yet need to be churned inside a bioreactor, but they’re mightily packed with roughly 200 million cells every milliliter—about the bottom bit of a teaspoon. These make up the technique’s building blocks, or OBBs.

Next, roughly 400,000 OBBs are mixed with a dense, gel-like liquid with the consistency of mayonnaise at a low temperature. The liquid is filled with collagen, a protein that keeps our skin elastic, and other synthetic versions. The OBBs are now somewhat suspended inside the gel-like matrix, which is “ideally suited for creating vascular channels,” the team said. Altogether, the organoids and gel are compacted into a density similar to human tissue, making up the raw material for further sculpting.

Now the fun second step. Using a 3D printer, the team moved a tiny nozzle containing both harmless red ink and gelatin into the mixture, depositing both in a pre-programmed manner. In this way, the team was able to “draw” intricate branch-like patterns into the organoid-gel mixture. Similar to squeezing frosting out of a bag, the team was able to adjust the diameter of the gelatin ink by nearly two-fold, mimicking the usual structure of blood vessels—thick main channels that increasingly become tinier.

Once the network was fully printed, they then gently heated the mixture to body temperature.  The matrix stiffens, and the gelatin ink—acting like Jello left under the sun for too long—melts and is washed away. What remains is a network of OBBS, or organoids, linked with a vascular structure that can now be filled with blood.

As a proof of concept, the team went straight for the heart—cardiac tissue, that is. They repeated the steps using heart-derived cells, and kept the resulting chunk of heart, a little bigger than half an inch inside a chamber, filled with a nutritious, oxygen-rich bath.

Within a week, individual organoids embedded inside the gel fused together into a collective: the tissue was able to contract almost 50 percent better than immediately after printing, and the beating rhythm synchronized, suggesting that the lab-grown tissue had further matured.

The tissue even reacted similarly to a normal heart. When the team infused a drug that increases heart rate into those printed vessels, the tissue doubled in its “heartbeat.” Similarly, drugs that normally decrease heart muscle contraction also worked on the mini-heart. As a final proof of concept demo, the team printed a chunk of heart tissue with a branch of the coronary artery—a main blood vessel branch that normally wraps the heart.

The new study is hardly the first try at printing organs with blood vessels. Miller, for example, biomanufactured a hydrogel that mimicked a lung air sac earlier this May. Layer by layer, the precise anatomy of the lung-mimicking structure is constructed with liquid hydrogel, and solidified using light.

The new study stands out in its sheer creativity. By combining organoids with an ancient sculpture technique, the team was able to pack far more cells into the resulting structure, while tapping into the natural mini-organization that stems from organoids. The results aren’t just promising for printing larger, more intricate human organs with a blood supply—they could also help inform organoid research, which has struggled to keep the pseudo-organs alive.

The team is planning to transplant their SWIFT tissue into animals to further examine their function and health. But to the team, the main goal is to finally bring 3D-printed organs to people desperately on the transplant waiting list.