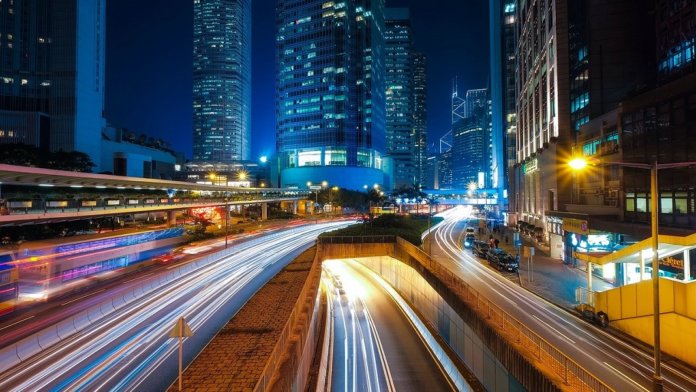 Roads criss-cross the landscape, but while they provide vital transport links, in many ways they represent a huge amount of wasted space. Advances in “smart road” technology could change that, creating roads that can harvest energy from cars, detect speeding, automatically weigh vehicles, and even communicate with smart cars.

“Smart city” projects are popping up in countries across the world thanks to advances in wireless communication, cloud computing, data analytics, remote sensing, and artificial intelligence. Transportation is a crucial element of most of these plans, but while much of the focus is on public transport solutions, smart roads are increasingly being seen as a crucial feature of these programs.

New technology is making it possible to tackle a host of issues including traffic congestion, accidents, and pollution, say the authors of a paper in the journal Proceedings of the Royal Society A. And they’ve outlined ten of the most promising advances under development or in planning stages that could feature on tomorrow’s roads.

A variety of energy harvesting technologies integrated into roads have been proposed as ways to power street lights and traffic signals or provide a boost to the grid. Photovoltaic panels could be built into the road surface to capture sunlight, or piezoelectric materials installed beneath the asphalt could generate current when deformed by vehicles passing overhead.

Countries like Japan, Denmark, the Netherlands, Taiwan, and South Korea have built roads that play music as cars pass by. By varying the spacing of rumble strips, it’s possible to produce a series of different notes as vehicles drive over them. The aim is generally to warn of hazards or help drivers keep to the speed limit.

Weight-in-motion technology that measures vehicles’ loads as they drive slowly through a designated lane has been around since the 1970s, but more recently high speed weight-in-motion tech has made it possible to measure vehicles as they travel at regular highway speeds. The latest advance has been integration with automatic licence plate reading and wireless communication to allow continuous remote monitoring both to enforce weight restrictions and monitor wear on roads.

The growing popularity of electric vehicles has spurred the development of technology to charge cars and buses as they drive. The most promising of these approaches is magnetic induction, which involves burying cables beneath the road to generate electromagnetic fields that a receiver device in the car then transforms into electrical power to charge batteries.

Traffic signs aren’t always as visible as they should be, and it can often be hard to remember what all of them mean. So there are now proposals for “smart signs” that wirelessly beam a sign’s content to oncoming cars fitted with receivers, which can then alert the driver verbally or on the car’s display. The approach isn’t affected by poor weather and lighting, can be reprogrammed easily, and could do away with the need for complex sign recognition technology in future self-driving cars.

Sensors and cameras can be combined with these same smart signs to detect and automatically notify drivers of traffic violations. The automatic transmission of traffic signals means drivers won’t be able to deny they’ve seen the warnings or been notified of any fines, as a record will be stored on their car’s black box.

Combing sensors and cameras with object recognition systems that can detect vehicles and other road users can help increase safety and efficiency at intersections. It can be used to extend green lights for slower road users like pedestrians and cyclists, sense jaywalkers, give priority to emergency vehicles, and dynamically adjust light timers to optimize traffic flow. Information can even be broadcast to oncoming vehicles to highlight blind spots and potential hazards.

There’s a “golden hour” after an accident in which the chance of saving lives is greatly increased. Vehicle communication technology can ensure that notification of a crash reaches the emergency services rapidly, and can also provide vital information about the number and type of vehicles involved, which can help emergency response planning. It can also be used to alert other drivers to slow down or stop to prevent further accidents.

Street lights are increasingly being embedded with sensors, wireless connectivity, and micro-controllers to enable a variety of smart functions. These include motion activation to save energy, providing wireless access points, air quality monitoring, or parking and litter monitoring. This can also be used to send automatic maintenance requests if a light is faulty, and can even allow neighboring lights to be automatically brightened to compensate.