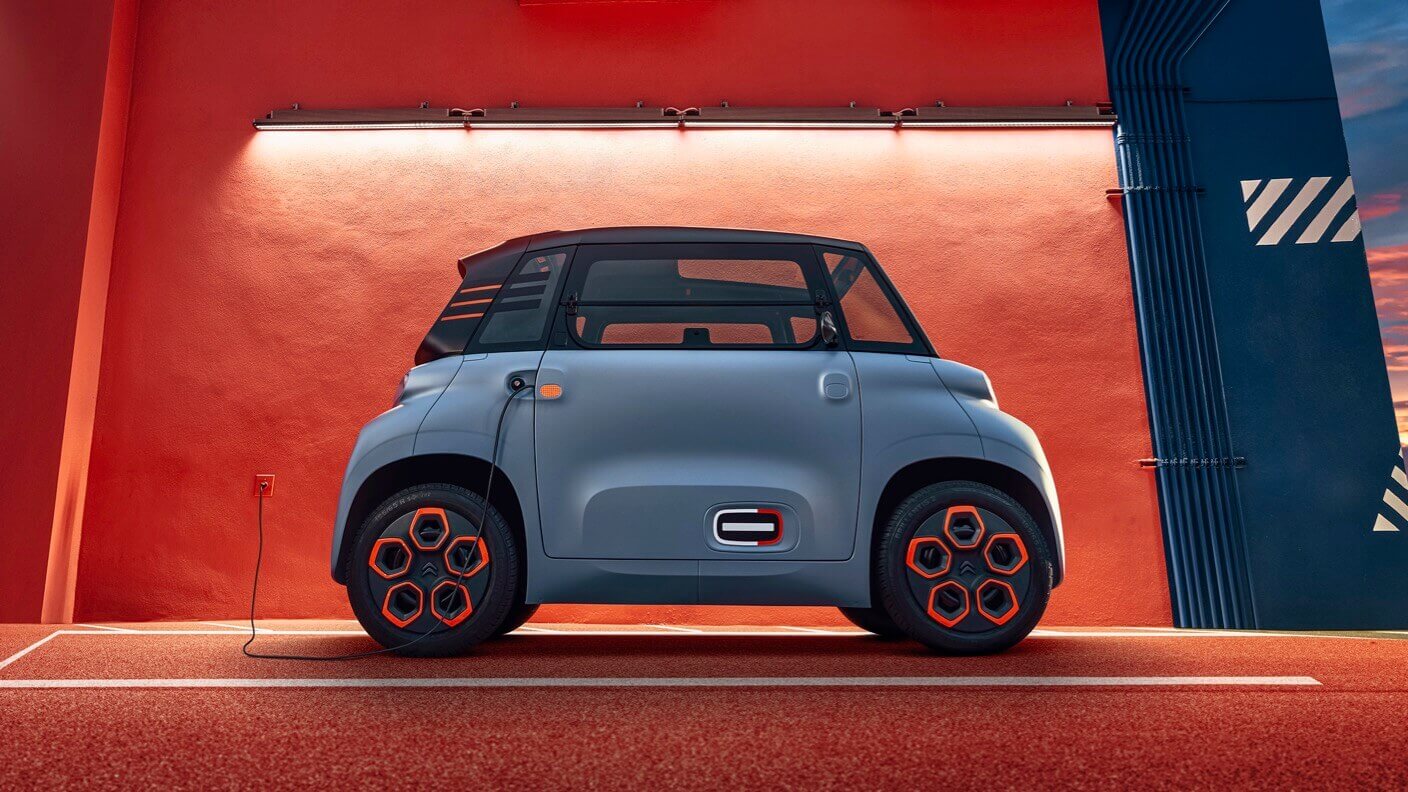 On any given day, in any given city, the roads are packed with cars, motorcycles, scooters, and bikes. It’s been like that for decades. Recently, though, there’s been a Cambrian explosion of alt transportation—electric scooters (the stand-up kind), electric bikes, powered skateboards, and one-wheeled or two-wheeled self-balancing boards.

In cities, traditional cars aren’t all they’re cracked up to be. Depending on the hour, traffic and parking alone can derail plans of a “quick” errand. Not to mention the fact you’re paying up for an often dormant, depreciating asset and space to store it.

Instead, how about a mini electric car that fits snugly in those infuriatingly common half-spots, has storage and a roof, and is ultra-affordable to buy and rent? Well, if you live in Europe, carmaker, Citroën, has your back with their new electric tiny car.

A City Ride on the Cheap

The 8-foot Citroën Ami seats two and has an 8-horsepower motor with a top speed of 27.9 miles per hour. Under French law, it’s categorized as a quadricycle—like the Renault Twizy (only cheaper)—and anyone over 14 can drive one, no license needed. It has neither range, offering only 43 miles, nor power. But so what? It’ll charge in three hours, and depending on sprawl factor, most trips won’t be more than a few miles anyway.

The tiny car’s most notable spec is its price. Customers will be able to order one online and have it delivered to their door for around $6,700 (as of this writing). Or with a down payment of about $3,000 you can lease it for $5.67 a week thereafter. If you decide to use the shared service, it’ll cost around $0.29 a minute—with an $11 a month subscription—which is within the range of prices you’d pay to ride an electric scooter. (Price varies by city and service, but they’re mostly between $0.15 and $0.35 a minute.)

Europe is no stranger to small cars. There have been lots of fun and bizarre creations over the years. The German Messerschmitt comes to mind or those three-wheeled contraptions Rowan Atkinson’s Mr. Bean would inevitably tip over. Although they were discontinued in the US and Canada in 2019, Smart cars have also been toddling about city streets and snaking parking spots for years.

The Ami, and other electric vehicles like it, are evolving this tiny car heritage. With electric motors and affordable options, including sharing, they’re also part of the trend to make city transportation minimalist. This means cheaper, more energy efficient, more convenient options for getting around, and, by definition, it usually means tiny vehicles too.

The demand for micromobility, as it’s called, is hard to miss.

You need only look along many a downtown street or at the valuation of electric scooter company, Bird. The startup was the fastest ever to reach a $1 billion valuation—and more than doubled that valuation last year. Meanwhile, cities are looking to reduce or remove cars from city centers to make them more people-centric.

Electric scooters are undeniably popular, but they aren’t for everyone or every trip.

Maybe it’s cold or rainy or you’ve got a bum knee. Sometimes people need storage for groceries or other cargo. On occasion, like bike commuters, one might wake up to the insanity of riding along with little between you, a pack of multi-ton metal beasts, and hard asphalt. (It seems emergency room visits are up more than a bit in scooter-happy cities.)

This is the niche an electric tiny car fills. Not a car, not a scooter. A bit more comfort and safety, some space in the back, a roof, and a smartphone cradle and speakers to privately jam out to tunes of your choice.

According to Citroën, the company took the Ami from concept to product in about a year. They built it to be affordable by minimizing the number of unique parts. Because the driver and passenger doors are identical, for example, one hinge is on the front, the other the back. The driver’s smartphone stands in for a center dashboard.

Citroën will begin taking orders at the end of March, with first deliveries in June. After rolling out in France, the Ami will be available in Italy, Portugal, Belgium, and Germany.

To be clear, Citroën is a big name, but it is far from the only company thinking about the future of mobility in cities. The micromobility menagerie is fast expanding. Of course, it includes scooters, hoverboards, and one-wheels. There are also covered electric quadricycles for one passenger, like a smaller Ami, and covered electric tricycles.

And it’s not altogether clear a tiny electric car will suit all markets equally. Smart’s North America exit may show the Ami will make more of a splash on Europe’s narrow, winding streets than the wider streets and urban sprawl more typical in the US.

But whichever creatures make it out of the Cambrian period of micromobility, it seems likely we’ll have a well-stocked menu of options for city travel in the not-too-distant future.