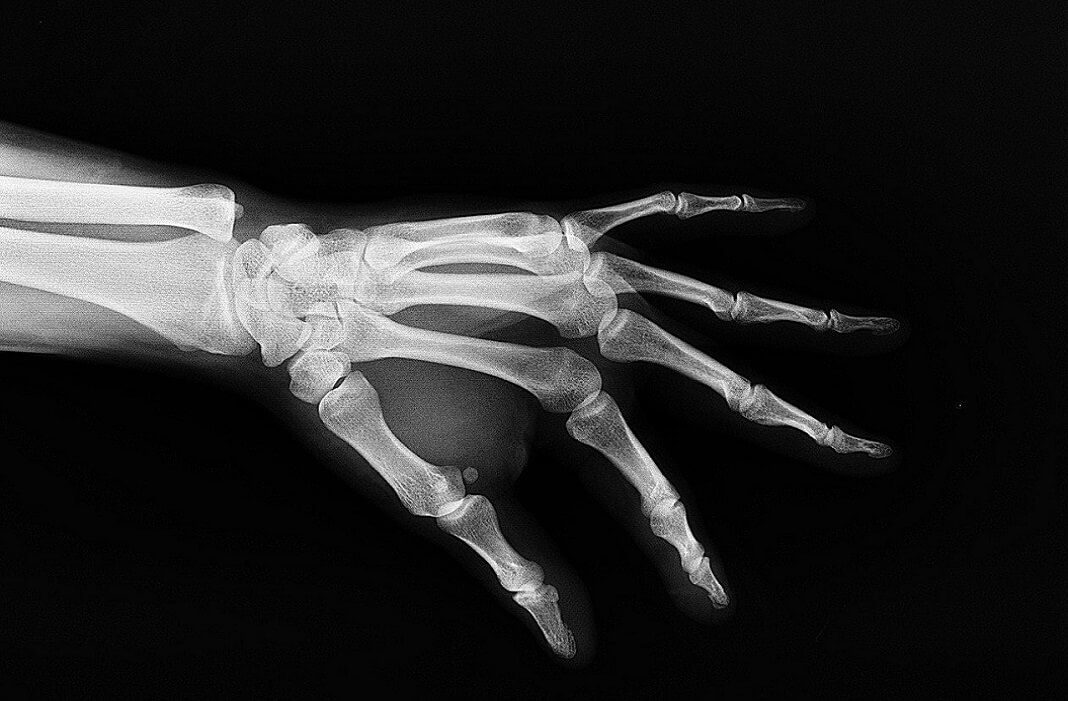 Become partially android for a couple of years while your body heals itself.

It may sound far-fetched, but for patients needing reconstructive surgery, this could soon be the pitch from Danish startup Particle3D. The company is pioneering a novel method for 3D printing lightweight, customized bone implants that fuse with your skeleton before slowly disappearing.

The technology carries a lower risk of infection and the implants are tailored to your body (and the method could soon be heading to space with astronauts!).

Traditional implants generally consist of non-degradable materials such as polymer or titanium. Particle3D uses a “bio-ink” made from tricalcium phosphate (TCP) powder particles and fatty acids. TCP been used in reconstructive surgery for decades, but is normally manually sculpted by surgeons from solid blocks into the desired implant shape. This approach can limit the potential positive effects of TCP, for example, when it comes to stimulating natural bone growth.

Particle3D’s process most often starts with scans of a patient’s bones or the area where the implant will be placed. The data is fed into a computer program, which allows surgeons and staff to optimize the implant design using CAD computer models. A customized implant is then printed by Particle3D and sent to a hospital for insertion.

3D printing TCP enables the company to create more porous implants. The porous structures allow the implants to function as scaffolds for blood vessels and natural bone to grow, and the implants degrade over time as they are supplanted by natural bone. Trials on pigs and mice have shown new bone marrow and blood vessels developing in the implants after as little as eight weeks.

The use of 3D printing in healthcare has followed a similar path to that of manufacturing: from a focus on rapid prototyping to full-scale production.

Early use cases from 3D printing in healthcare included printing 3D models of bones, body parts, and organs ahead of surgeries, allowing surgeons to better visualize and practice ahead of operations. It has gradually moved into printing tools and solutions like medicine and bone implants. Soon we may see 3D printed body parts.

Customization, lower costs, shorter time-to-market, and distributed production are among 3D printing’s advantages in healthcare. A good example is 3DP4ME. Although the name suggests a missing droid from Star Wars, it is a non-profit dedicated to bringing hearing aids to the millions of people in developing countries who don’t currently have access to them. Through 3D scanning, 3D modeling, and 3D printing, the non-profit hopes to deliver 12,000 custom-fitted hearing aids over the coming 5 years in countries such as Jordan.

Storing Medicine Inside Your Bones

When it comes to 3D printing bone implants, one of the benefits is a low likelihood of infections and post-operation complications. Considering the scope of implant surgery, which often necessitates opening up part of the patient to insert the implant, infection risks hound both operations and subsequent recovery phases. Some polymer or titanium implants must be removed again at a later date, necessitating additional surgeries. Implants may also lead to complications such as limited use of a limb or chronic pain.

Creating an exact copy of a bone’s complex, three-dimensional structure that the body can gradually eliminate as it heals itself could save patients from both additional surgeries and permanent health issues.

But using porous TCP to print bones does have some drawbacks. Its compressive strength is much lower than that of some human load-bearing bones, such as our thighbones. Compressive strength would rise over time, but it could be years before it would match pre-operation strength levels.

Several other groups are working on similar approaches. At NYU School of Medicine and NYU Langone Health, scientists have been developing 3D printed scaffold implants that could help patient groups such as children with skull deformities. Early research results show that up to 77 percent of the bone scaffolding had been absorbed and replaced by natural bone 6 months after surgery, and that the newly-grown bone was just as strong as the original.

However, most research groups find themselves in the same boat as Particle3D, cautioning that use in humans could still be years off. Part of the reason is that there is a regulatory lag when it comes to 3D printing biological materials for use in humans. Medical licensing is, with good reason, often a lengthy process, so it may be even longer before the first human patients benefit from the new technology.

An enormous potential for improving the treatment of patients, including in remote and inhospitable areas, counterbalances the currently complicated regulatory landscape.

The best illustration of the inhospitable and remote locations the technology could service comes from the European Space Agency’s (ESA) 3D Printing of Living Tissue for Space Exploration project. Its goal is to find ways of keeping astronauts safe and healthy on, for example, interplanetary missions to Mars. One of its core approaches is to 3D print skin and bone using bio-ink. Tommaso Ghidini, head of ESA’s Structures, Mechanisms and Materials Division, explains that the 3D printing could help astronauts overcome a wider scope of medical eventualities while not increasing the need to take up precious space and mass in a spacecraft.

Whether in space or on Earth, 3D printing holds great potential in healthcare to create new solutions and improve patients’ prospects for recovery—and the 2020s will likely see the technology take off.