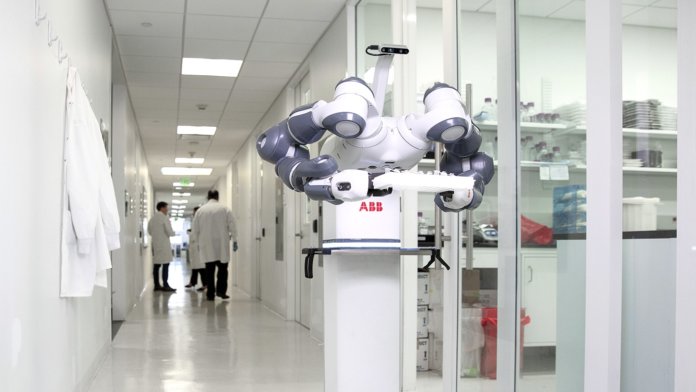 As the coronavirus pandemic forces people to keep their distance, could this be robots‘ time to shine? A group of scientists think so, and they’re calling for robots to do the “dull, dirty, and dangerous jobs” of infectious disease management.

Social distancing has emerged as one of the most effective strategies for slowing the spread of COVID-19, but it’s also bringing many jobs to a standstill and severely restricting our daily lives. And unfortunately, the one group that can’t rely on its protective benefits are the medical and emergency services workers we’re relying on to save us.

Robots could be a solution, according to the editorial board of Science Robotics, by helping replace humans in a host of critical tasks, from disinfecting hospitals to collecting patient samples and automating lab tests.

According to the authors, the key areas where robots could help are clinical care, logistics, and reconnaissance, which refers to tasks like identifying the infected or making sure people comply with quarantines or social distancing requirements. Outside of the medical sphere, robots could also help keep the economy and infrastructure going by standing in for humans in factories or vital utilities like waste management or power plants.

When it comes to clinical care, robots can play important roles in disease prevention, diagnosis and screening, and patient care, the researchers say. Robots have already been widely deployed to disinfect hospitals and other public spaces either using UV light that kills bugs or by repurposing agricultural robots and drones to spray disinfectant, reducing the exposure of cleaning staff to potentially contaminated surfaces. They are also being used to carry out crucial deliveries of food and medication without exposing humans.

But they could also play an important role in tracking the disease, say the researchers. Thermal cameras combined with image recognition algorithms are already being used to detect potential cases at places like airports, but incorporating them into mobile robots or drones could greatly expand the coverage of screening programs.

A more complex challenge—but one that could significantly reduce medical workers’ exposure to the virus—would be to design robots that could automate the collection of nasal swabs used to test for COVID-19. Similarly automated blood collection for tests could be of significant help, and researchers are already investigating using ultrasound to help robots locate veins to draw blood from.

Convincing people it’s safe to let a robot stick a swab up their nose or jab a needle in their arm might be a hard sell right now, but a potentially more realistic scenario would be to get robots to carry out laboratory tests on collected samples to reduce exposure to lab technicians. Commercial laboratory automation systems already exist, so this might be a more achievable near-term goal.

Not all solutions need to be automated, though. While autonomous systems will be helpful for reducing the workload of stretched health workers, remote systems can still provide useful distancing. Remote control robotics systems are already becoming increasingly common in the delicate business of surgery, so it would be entirely feasible to create remote systems to carry out more prosaic medical tasks.

Such systems would make it possible for experts to contribute remotely in many different places without having to travel. And robotic systems could combine medical tasks like patient monitoring with equally important social interaction for people who may have been shut off from human contact.

In a teleconference last week Guang-Zhong Yang, a medical roboticist from Carnegie Mellon University and founding editor of Science Robotics, highlighted the importance of including both doctors and patients in the design of these robots to ensure they are safe and effective, but also to make sure people trust them to observe social protocols and not invade their privacy.

But Yang also stressed the importance of putting the pieces in place to enable the rapid development and deployment of solutions. During the 2015 Ebola outbreak, the White House Office of Science and Technology Policy and the National Science Foundation organized workshops to identify where robotics could help deal with epidemics.

But once the threat receded, attention shifted elsewhere, and by the time the next pandemic came around little progress had been made on potential solutions. The result is that it’s unclear how much help robots will really be able to provide to the COVID-19 response.

That means it’s crucial to invest in a sustained research effort into this field, say the paper’s authors, with more funding and multidisciplinary research partnerships between government agencies and industry so that next time around we will be prepared.

“These events are rare and then it’s just that people start to direct their efforts to other applications,” said Yang. “So I think this time we really need to nail it, because without a sustained approach to this history will repeat itself and robots won’t be ready.”