See How This House Was 3D Printed in Just 24 Hours 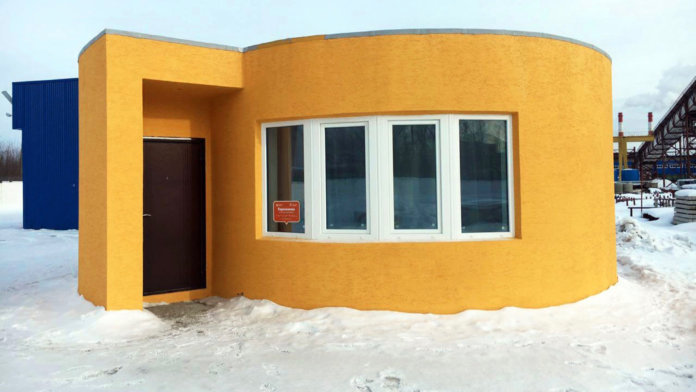 3D printing is being used to produce more and more novel items: tools, art, even rudimentary human organs. What all those items have in common, though, is that they’re small. The next phase of 3D printing is to move on to things that are big. Really big. Like, as big as a house.

In a small town in western Russia called Stupino, a 3D printed house just went up in the middle of winter and in a day’s time.

Pieces of houses and bridges have been 3D printed in warehouses or labs then transported to their permanent locations to be assembled, but the Stupino house was printed entirely on-site by a company called Apis Cor. They used a crane-sized, mobile 3D printer and a specially-developed mortar mix and covered the whole operation with a heated tent.

The 38-square-meter (409-square-foot) house is circular, with three right-angled protrusions allowing for additional space and division of the area inside. Counter-intuitively, the house’s roof is completely flat. Russia’s not known for mild, snow-free winters. Made of welded polymer membranes and insulated with solid plates, the roof was designed to withstand heavy snow loads.

Apis Cor teamed up with partners for the house’s finishing details, like insulation, windows, and paint. Samsung even provided high-tech appliances and a TV with a concave-curved screen to match the curve of the interior wall.

According to the company, the house’s total building cost came to $10,134, or approximately $275 per square meter, which equates to about $25 per square foot. A recent estimate put the average cost of building a 2,000 square foot home in the US at about $150 per square foot.

The homes of the future?

Since these houses are affordable and fast to build, is it only a matter of time before we’re all living in 3D printed concrete circles?

Probably not—or, at least, not until whole apartment buildings can be 3D printed. The Stupino house would be harder (though not impossible) to plop down in the middle of a city than in the Russian countryside.

While cities like Dubai are aiming to build more 3D printed houses, what many have envisioned for the homes of the future are environmentally-friendly, data-integrated ‘smart buildings,’ often clad with solar panels and including floors designated for growing food.

Large-scale 3D printing does have some very practical applications, though. Take disaster relief: when a hurricane or earthquake destroys infrastructure and leaves thousands of people without shelter, 3D printers like Apis Cor’s could be used to quickly rebuild bridges, roads, and homes.

Also, given their low cost and high speed, 3D printed houses could become a practical option for subsidized housing projects.

In the US, tiny houses have been all the rage among millennials lately—what if that tiny house could be custom-printed to your specifications in less than a week, and it cost even less than you’d budgeted?

Since software and machines are doing most of the work, there’s less margin for human error—gone are the days of “the subcontractor misread the blueprint, and now we have three closets and no bathrooms!”

While houses made by robots are good news for people looking to buy a basic, low-cost house, they could be bad news for people employed in the construction industry. Machines have been pouring concrete for decades, but technologies like Apis Cor’s giant printer will take a few more human workers out of the equation.

Nonetheless, the company states that part of their mission is “to change the construction industry so that millions of people will have an opportunity to improve their living conditions.”