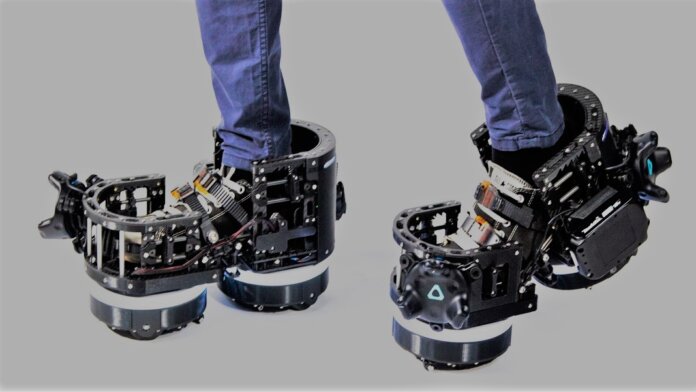 Last year I did a VR experience meant to simulate what it’s like to be at the US-Mexico border wall. The tall, foreboding wall towered above me, and as I turned from side to side there were fields of grass with some wildlife and a deceivingly harmless-looking border patrol station. I wanted to explore more, so I took a few steps toward the wall, hoping to catch a glimpse of the Mexico side through its tall metal slats.

“Oops!” a voice called out. A hand landed lightly on my arm. “Look out, you’re about to run into the wall.” The “wall” was in fact a curtain—the experience took place in a six-foot-by-eight-foot booth alongside dozens of similar VR booths—and I had, in fact, just about walked through it.

Virtual reality is slowly getting better, but there are all kinds of improvements that could make it feel more lifelike. More detailed graphics and higher screen resolution can make the visual aspect (which is, of course, most important) more captivating, and haptic gloves or full haptic suits can lend a sense of touch to the experience.

Now there’s a solution to the motion problem, too: a pair of robotic VR boots lets users walk around within an experience or game without actually leaving the enclosed space they’re in.

Dubbed Ekto One, the boots are the first product to come out of a Pittsburgh-based startup called Ekto VR. They’re made of lightweight carbon fiber and are sort of like a pair of skates with automatically-engaging brakes. They’re a bit clunky, because they have to accommodate the rotating discs built into the bottom, which turn in the direction the wearer moves. They’re basically little treadmills in boot form; your foot touches the floor and a set of wheels pull your leg back while you walk forwards, matching the motion it looks like you’re taking in your headset.

For the boots to make a VR experience more realistic, users will have to forget that the roller-skate-like contraptions are strapped to their feet. But this is just the first iteration, and as most flashy new tech tends to do, the boots (and other VR accessories) will get smaller, sleeker, and cheaper over time.

Pretty soon we may be able to walk all the way to Mexico without ever leaving the room.