Japanese Towns Use This Robotic Wolf to Scare Off Bears, and It’s Terrifying 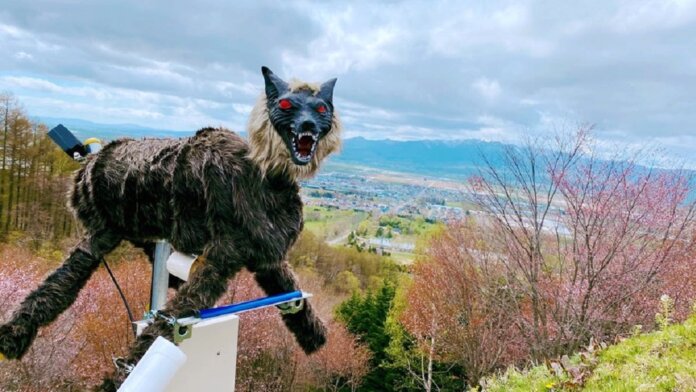 Halloween weekend is upon us, and as millions don costumes and visit haunted houses (as if real life wasn’t scary enough right now), several towns in Japan won’t be seeing any evil creatures, real nor in spirit—because they’ve got a terrifying robotic wolf to protect them.

Most recently added to this list is Takikawa, located on Japan’s northernmost island of Hokkaido and home to about 41,300 people. The robot, appropriately dubbed Monster Wolf, was installed to scare off wildlife—mainly bears—to stop them from getting near residential areas.

Bears are endogenous to the area and have been spotted in Takikawa and nearby towns before. While they don’t pose a huge risk to residents, they’re definitely hungry at this time of year—fall is when they eat more to bulk up and prepare for winter hibernation. If they were to make their way into the town center or into residential neighborhoods, they’d likely just dig through the garbage cans for food scraps.

But if you walked out your door and saw a bear in your yard, you’d probably have a hard time staying calm, as most people would. So Takikawa isn’t taking any chances, preferring to avoid the chaos that stray bears would cause among its residents by setting up this robot laden with sensors and speakers.

It’s sort of like a scarecrow, except that if you happened to run into it in the middle of the night—or, heck, even in broad daylight—it would probably haunt your dreams (or nightmares) for years to come.

Infrared sensors detect when bears or other living creatures enter the area, and in response the robot kicks its scare tactics into action: its eyes light up red and it emits a variety of loud sounds, from howls to gunshots to human voices. It reportedly can make over 60 different sounds, (at least one of which is truly ear-splitting, as you can hear in the video below) and is programmed to mix them up so that bears or other predators won’t get used to any one sound and hence stop being scared off.

Monster Wolf was made by a Japanese manufacturer of mechanical parts called Ohta Seiki, and it’s being used by more than 60 communities around Japan. The company’s president, Yuji Ohta, said of the robot, “We have included many methods in its design to drive off bears, so I am confident it will be effective. If this can help create an environment that bears and people can both live in, I will be happy.”

In the past, Takikawa and other towns hired hunters to trap bears or scare them off—so really, Monster Wolf is a textbook example of another phenomenon that’s keeping people up at night: robots stealing our jobs, or technological unemployment.

Let’s just hope that this weekend, no costumed kids run into one of the red-eyed, fang-toothed Monster Wolves (and yes, they do celebrate Halloween in Japan!), because that would certainly put a damper on an evening of trick-or-treating. On the plus side, at least there won’t be any bears rummaging through the trash cans full of candy wrappers next week.