A 3D Printed Apartment Building Is Going Up in Germany 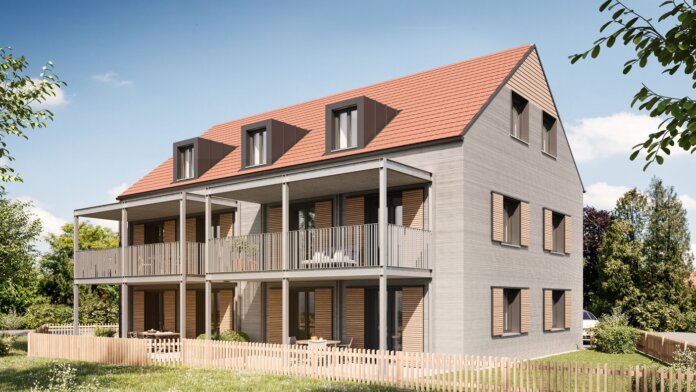 3D printing is making strides in the construction industry. In just a couple years we’ve seen the tech produce single-family homes in a day, entire communities of homes for people in need, large municipal buildings, and even an egg-shaped concept home for Mars (oh, and let’s not forget the 3D printed boats and cars of the world!).

Another impressive feat will soon be added to this list, as a German construction company has begun work on a 3D printed three-story apartment building.

Located north-west of Munich in a town called Wallenhausen, when completed the building will have five separate apartments and a total square footage of 4,090. The project is a collaboration between PERI Group, a German supplier of formwork and scaffolding systems, and COBOD, a Danish company that makes modular 3D printers for construction (and recently partnered with GE to 3D print the bases of 650-foot-tall wind turbines!).

The printer being used for the apartment building is called the BOD2. It’s the second iteration of the company’s original printer, called the BOD, which was used to print a small, free-standing office building in Copenhagen near one of the city’s harbors.

BOD2 is a gantry-style printer that moves between three axes on a metal frame. The material being used for construction has been dubbed “i.tech 3D.” It’s a cement mixture developed specifically for use in 3D printing by German multinational building materials company HeidelbergCement. BOD2 doesn’t do its thing at the push of a button; it needs two human operators to run it, and also has cameras that constantly monitor its activity.

COBOD claims the BOD2 is the fastest 3D construction printer on the market, laying down one meter’s worth of material per second—and leaving space for plumbing and electrical pipes in the process.

There is at least one 3D printed apartment building already in existence: a six-story building in Shanghai was unveiled in 2015 by Winsun Decoration Design Engineering Co. An important difference between that building and the German one is that the walls of the Shanghai building were printed offsite then assembled at the building location, whereas for the Wallenhausen building, the printer will lay down its cement mix on site, no subsequent moving or assembly required.

Unlike many other recent 3D printing construction projects, the apartment building isn’t a proof of concept or a demo—it’s a for-profit endeavor, and the apartments will be rented at market rates as soon as they’re completed.

“We are very confident that 3D construction printing will become increasingly important in certain market segments over the coming years and has considerable potential,” said Thomas Imbacher, PERI’s director of innovation and marketing. “By printing the first apartment building on-site, we are demonstrating that this new technology can also be used to print large-scale dwelling units.”

Bringing 3D printing into the mainstream of the construction industry is a worthwhile goal, because the technology saves on all kinds of costs while still yielding safe, durable structures. It’s also much faster than traditional construction methods, making it a prime tool for situations like disaster relief where dwellings need to go up quickly and cheaply.

The printing process for the apartment building is expected to take six weeks. If its creators’ vision plays out, it will be just the first of many such buildings in Germany and elsewhere; in just a few short years, living in a 3D printed apartment may be so common that it won’t even earn you any bragging rights.