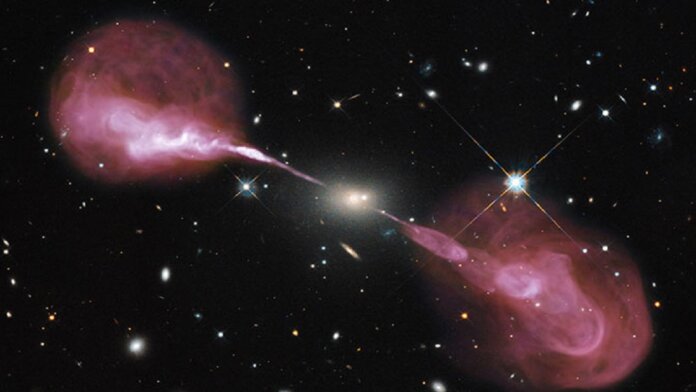 Radio images of the sky have revealed hundreds of “baby” and supermassive black holes in distant galaxies, with the galaxies’ light bouncing around in unexpected ways.

Galaxies are vast cosmic bodies, tens of thousands of light years in size, made up of gas, dust, and stars (like our sun). Given their size, you’d expect the amount of light emitted from galaxies would change slowly and steadily, over timescales far beyond a person’s lifetime.

But our research, published in the Monthly Notices of the Royal Astronomical Society, found a surprising population of galaxies whose light changes much more quickly, in just a matter of years.

What Is a Radio Galaxy?

Astronomers think there’s a supermassive black hole at the center of most galaxies. Some of these are “active,” which means they emit a lot of radiation. Their powerful gravitational fields pull in matter from their surroundings and rip it apart into an orbiting donut of hot plasma called an “accretion disk.”

This disk orbits the black hole at nearly the speed of light. Magnetic fields accelerate high-energy particles from the disk in long, thin streams or “jets” along the rotational axes of the black hole. As they get further from the black hole, these jets blossom into large mushroom-shaped clouds or “lobes.”

This entire structure is what makes up a radio galaxy, so called because it gives off a lot of radio-frequency radiation. It can be hundreds, thousands or even millions of light years across and therefore can take aeons to show any dramatic changes.

Astronomers have long questioned why some radio galaxies host enormous lobes, while others remain small and confined. Two theories exist. One is that the jets are held back by dense material around the black hole, often referred to as frustrated lobes.

However, the details around this phenomenon remain unknown. It’s still unclear whether the lobes are only temporarily confined by a small, extremely dense surrounding environment—or if they’re slowly pushing through a larger but less dense environment.

The second theory to explain smaller lobes is the jets are young and have not yet extended to great distances.

Old Ones Are Red, Babies Are Blue

Both young and old radio galaxies can be identified by a clever use of modern radio astronomy: looking at their “radio color.”

We looked at data from the GaLactic and Extragalactic All Sky MWA (GLEAM) survey, which sees the sky at 20 different radio frequencies, giving astronomers an unparalleled “radio color” view of the sky.

We identified 554 baby radio galaxies. When we looked at identical data taken a year later, we were surprised to see 123 of these were bouncing around in their brightness, appearing to flicker. This left us with a puzzle.

Something more than one light year in size can’t vary so much in brightness over less than one year without breaking the laws of physics. So, either our galaxies were far smaller than expected, or something else was happening.

Luckily, we had the data we needed to find out.

Past research on the variability of radio galaxies has used either a small number of galaxies, archival data collected from many different telescopes, or was conducted using only a single frequency.

For our research, we surveyed more than 21,000 galaxies over one year across multiple radio frequencies. This makes it the first “spectral variability” survey, enabling us to see how galaxies change brightness at different frequencies.

Some of our bouncing baby radio galaxies changed so much over the year we doubt they are babies at all. There’s a chance these compact radio galaxies are actually angsty teens rapidly growing into adults much faster than we expected.

While most of our variable galaxies increased or decreased in brightness by roughly the same amount across all radio colors, some didn’t. Also, 51 galaxies changed in both brightness and color, which may be a clue as to what causes the variability.

3 Possibilities for What Is Happening

As light from stars travels through Earth’s atmosphere, it is distorted. This creates the twinkling effect of stars we see in the night sky, called “scintillation.” The light from the radio galaxies in this survey passed through our Milky Way galaxy to reach our telescopes on Earth.

Thus, the gas and dust within our galaxy could have distorted it the same way, resulting in a twinkling effect.

2) Looking down the barrel

In our three-dimensional universe, sometimes black holes shoot high energy particles directly towards us on Earth. These radio galaxies are called “blazars.”

Instead of seeing long thin jets and large mushroom-shaped lobes, we see blazars as a very tiny bright dot. They can show extreme variability in short timescales, since any little ejection of matter from the supermassive black hole itself is directed straight towards us.

When the central supermassive black hole “burps” some extra particles they form a clump slowly travelling along the jets. As the clump propagates outwards, we can detect it first in the “radio blue” and then later in the “radio red.”

So we may be detecting giant black hole burps slowly travelling through space.

This is the first time we’ve had the technological ability to conduct a large-scale variability survey over multiple radio colors. The results suggest our understanding of the radio sky is lacking and perhaps radio galaxies are more dynamic than we expected.

As the next generation of telescopes come online, in particular the Square Kilometer Array (SKA), astronomers will build up a dynamic picture of the sky over many years.

In the meantime, it’s worth watching these weirdly behaving radio galaxies and keeping a particularly close eye on the bouncing babies, too. 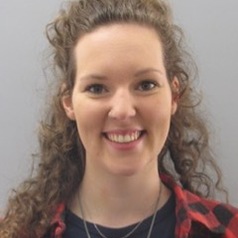 Kathryn Ross
My background consists of a B.Science with a double major in Mathematics and Physics, including First class Honours in Physics. Currently, I am researching Active Galactic Nuclei using the MWA telescope at the International Centre for Radio Astronomy Research at Curtin University in Perth as part of my PhD. I have researched the effectiveness of types of resources in teaching physics as a member of the Sydney University Physics Education Research (SUPER) Group. I have also worked extensively in communicating science in a range of settings, from radio, livestream videos on YouTube to crowds at the Star Gazing Live World Record attempt in May. I particularly focus on encouraging females to pursue careers in physics and STEM. My previous astronomical research has included estimating the dark matter content of nearby radio galaxies at Sheffield University in the UK. At SIfA, I built on previous work using the VAMPIRES Instrument, a differential polarimetric interferometric aperture mask, to detect and model the dust around the red supergiant star, MuCep.
RELATED