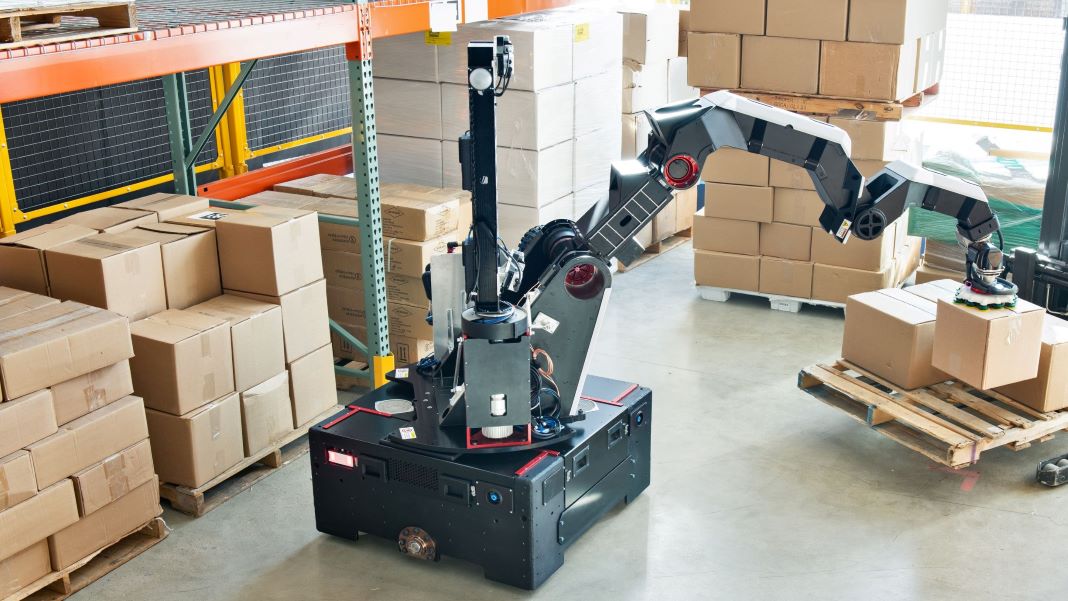 This week, Boston Dynamics (whose dancing robots video I still can’t watch without cracking up) unveiled the newest addition to its robot menagerie. Stretch is the less aesthetically pleasing but highly practical cousin of Atlas, Handle, and Spot, and it has the potential to bring significant changes to warehouse operations.

As mundane as “warehouse operations” sounds, consider that online spending represented more than a fifth of total US retail sales in 2020, growing by 44 percent from 2019 (granted, the pandemic was responsible for the bulk of this). That’s a lot of boxes being moved around warehouses and from warehouses onto and off of trucks—and it so happens that the new robot’s specialty is moving boxes.

Stretch looks like (and essentially is) a small robotic crane on wheels. Its square base contains weights so it doesn’t tip over when lifting heavy boxes, and it “sees” its surroundings using cameras and sensors mounted on a mast that’s separate from its lifting arm.

The lifting arm can rotate, and it grips and moves boxes not by clamping onto them and applying pressure from opposite sides (the way humans lift boxes), but by sticking a “smart gripper” with multiple suction cups onto one side of the box.

Suction seems like a pretty precarious way to lift a box, especially given that Stretch can reportedly lift up to 50 pounds at once, and considering that boxes are made of cardboard (which doesn’t seem like it would adhere to rubber suction cups nearly as well as, say, glass or plastic).

But Boston Dynamics has full confidence in the bot’s functionality, and is hoping its main selling point will be its mobility. It’s hard to integrate automation into infrastructures that aren’t set up for it. While most highly-automated warehouses are built around machines from the start, Stretch will be able to roll into corners and crannies not designed for automation and get to work.

Stretch can move up to 800 boxes an hour, and can operate on batteries for eight consecutive hours or be plugged in. Boston Dynamics is planning to commercially deploy Stretch next year, and is currently looking for customers to pilot test the robot’s truck-unloading skills.

While ecommerce may see a slight post-pandemic dip as more people become comfortable going to stores again, it’s not likely there will be a dramatic change in the volume of goods bought online; we’ve gotten used to clicking a few buttons on our screens and having our stuff show up at our doorsteps.

At the same time, relations between warehouse workers and corporate management are becoming more fraught as complaints about wages and working conditions rise. Amazon employees at an Alabama warehouse may become the first to unionize, and would likely be followed by other warehouses around the country.

In a sense, then, this isn’t the greatest time to introduce a robot that could replace many human workers. But in another sense, it seems like Stretch and similar bots will be necessary tools to relieve some of the burden on employees, help companies and the supply chain keep up with growing ecommerce demand, and take over some of the heavy lifting.