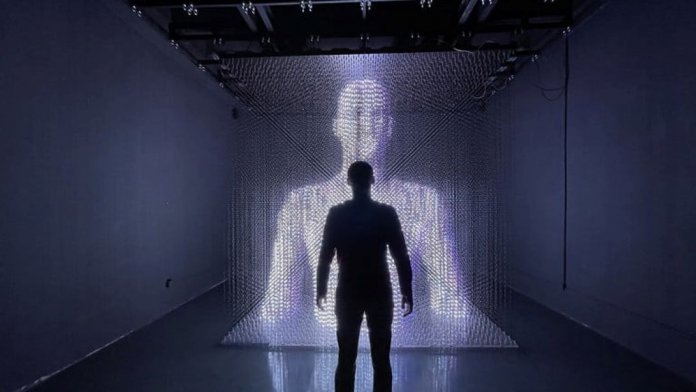 Though we don’t quite have the technology to make three-dimensional holograms a reality yet, companies like PORTL and Microsoft are working on it. But a third company decided to forego the traditional approach and came up with a whole new way to create 3D shapes made of light.

LED Pulse uses thousands of strings of LED lights to make volumetric displays that, while not technically holograms, look a lot like them. The latest iteration of their technology is called Dragon O, and it can be as big as a room and display any sort of content its creators can dream up.

Writing in Digital Trends, Luke Dormehl likens the setup to 100 beaded string curtains where every bead is a tiny light, with dozens of curtains positioned one in front of the other. The company calls the individual lights “LED neurons,” and compares their function to that of neurons in the human brain; both receive information through electrical impulses, and while capable of functioning independently, can only create an idea (or, in this case, an image) when working cohesively.

“Our brain is a machine that constructs reality, selects and filters the necessary information,” the company’s website says. Similarly, the light displays they create can be configured to produce any sort of visual they choose, including moving images.

While “LED neurons” may be an interesting approximation, the lights can also be called voxels. You can think of a voxel as the 3D version of a pixel; if a pixel is a square or a point on a flat, two-dimensional image on a screen, a voxel is a point on a grid in three-dimensional space. Put in a way that’s easier to picture, it’s a cube inside a 3D model. The layered setup of voxels means LED Pulse’s installations are truly three-dimensional; any different angle you view them from, you’ll see something different, same as viewing an object or a person in real life.

“If you have a volumetric human made out of light, and you walk around the back, you will see their back. If you go to the left, you will see the left arm. It’s all exactly how it would be in the real world,” said LED Pulse’s founder, Danilo Grande. “Every time we create an exhibition, we invite people to walk around, not to stay in one place only.”

The company measures its light displays in cuboids (like cubes, except rectangular instead of square-shaped, meaning not all sides are the same length). Each cuboid has a volume of three cubic meters and contains 24,000 voxels. Cuboids can be put together to make larger displays, with the largest thus far consisting of 6 cuboids and a corresponding 144,000 voxels.

Dragon O has been used in a Lancome perfume launch, a game called Virus Killer, a nightclub in Berlin, and events in Shenzhen, Barcelona, and Munich.

The Munich event was an anniversary party for a German company called BrainLab, which makes hardware and software to enhance medical data collection and presentation. Dragon O created 3D images of the brain, exploring potential applications of its technology in scientific or medical fields.

Though Dragon O is, at the moment, mostly just an “artistic experience,” LED Pulse is optimistic about finding practical applications for its technology, including the same thing PORTL and Microsoft are working on: “teleporting” real-time 3D images of people to different locations to meet and collaborate with others.

In the meantime, as the world starts to open up again, we hope to see Dragon O lighting up the night (or day) at events and exhibitions around the world.