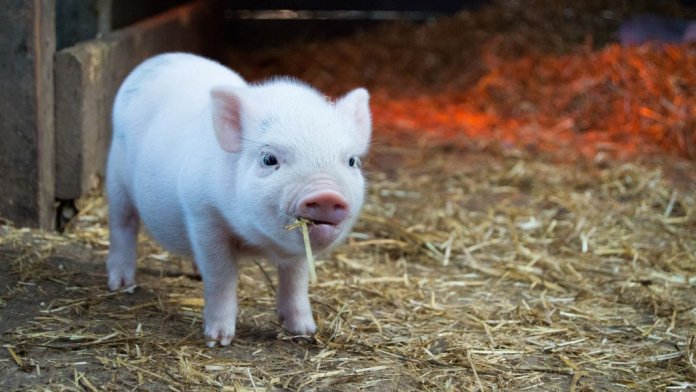 The little pigs bouncing around the lab looked exceedingly normal. Yet their adorable exterior hid a remarkable secret: each piglet carried two different sets of genes. For now, both sets came from their own species. But one day, one of those sets may be human.

The piglets are chimeras—creatures with intermingled sets of genes, as if multiple entities were seamlessly mashed together. Named after the Greek lion-goat-serpent monsters, chimeras may hold the key to an endless supply of human organs and tissues for transplant. The crux is growing these human parts in another animal—one close enough in size and function to our own.

Last week, a team from the University of Minnesota unveiled two mind-bending chimeras. One was joyous little piglets, each propelled by muscles grown from a different pig. Another was pig embryos, transplanted into surrogate pigs, that developed human muscles for more than 20 days.

The study, led by Drs. Mary and Daniel Garry at the University of Minnesota, had a therapeutic point: engineering a brilliant way to replace muscle loss, especially for the muscles around our skeletons that allow us to move and navigate the world. Trauma and injury, such as from firearm wounds or car crashes, can damage muscle tissue beyond the point of repair. Unfortunately, muscles are also stubborn in that donor tissue from cadavers doesn’t usually “take” at the injury site. For now, there are no effective treatments for severe muscle death, called volumetric muscle loss.

The new human-pig hybrids are designed to tackle this problem. Muscle wasting aside, the study also points to a clever “hack” that increases the amount of human tissue inside a growing pig embryo.

If further improved, the technology could “provide an unlimited supply of organs for transplantation,” said Dr. Mary Garry to Inverse. What’s more, because the human tissue can be sourced from patients themselves, the risk of rejection by the immune system is relatively low—even when grown inside a pig.

“The shortage of organs for heart transplantation, vascular grafting, and skeletal muscle is staggering,” said Garry. Human-animal chimeras could have a “seismic impact” that transforms organ transplantation and helps solve the organ shortage crisis.

That is, if society accepts the idea of a semi-humanoid pig.

The new study took a page from previous chimera recipes.

The main ingredients and steps go like this: first, you need an embryo that lacks the ability to develop a tissue or organ. This leaves an “empty slot” of sorts that you can fill with another set of genes—pig, human, or even monkey.

Second, you need to fine-tune the recipe so that the embryos “take” the new genes, incorporating them into their bodies as if they were their own. Third, the new genes activate to instruct the growing embryo to make the necessary tissue or organs without harming the overall animal. Finally, the foreign genes need to stay put, without cells migrating to another body part—say, the brain.

The team went for two chimeras: one with two sets of pig genes, the other with a pig and human mix. Both started with a pig embryo that can’t make its own skeletal muscles (those are the muscles surrounding your bones). Using CRISPR, the gene-editing Swiss Army Knife, they snipped out three genes that are absolutely necessary for those muscles to develop. Like hitting a bullseye with three arrows simultaneously, it’s already a technological feat.

Here’s the really clever part: the muscles around your bones have a slightly different genetic makeup than the ones that line your blood vessels or the ones that pump your heart. While the resulting pig embryos had severe muscle deformities as they developed, their hearts beat as normal. This means the gene editing cut only impacted skeletal muscles.

Then came step two: replacing the missing genes. Using a microneedle, the team injected a fertilized and slightly developed pig egg—called a blastomere—into the embryo. If left on its natural course, a blastomere eventually develops into another embryo. This step “smashes” the two sets of genes together, with the newcomer filling the muscle void. The hybrid embryo was then placed into a surrogate, and roughly four months later, chimeric piglets were born.

Equipped with foreign DNA, the little guys nevertheless seemed totally normal, nosing around the lab and running everywhere without obvious clumsy stumbles. Under the microscope, their “xenomorph” muscles were indistinguishable from run-of-the-mill average muscle tissue—no signs of damage or inflammation, and as stretchy and tough as muscles usually are. What’s more, the foreign DNA seemed to have only developed into muscles, even though they were prevalent across the body. Extensive fishing experiments found no trace of the injected set of genes inside blood vessels or the brain.

Confident in their recipe, the team next repeated the experiment with human cells, with a twist. Instead of using controversial human embryonic stem cells, which are obtained from aborted fetuses, they relied on induced pluripotent stem cells (iPSCs). These are skin cells that have been reverted back into a stem cell state.

Unlike previous attempts at making human chimeras, the team then scoured the genetic landscape of how pig and human embryos develop to find any genetic “brakes” that could derail the process. One gene, TP53, stood out, which was then promptly eliminated with CRISPR.

This approach provides a way for future studies to similarly increase the efficiency of interspecies chimeras, the team said.

The human-pig embryos were then carefully grown inside surrogate pigs for less than a month, and extensively analyzed. By day 20, the hybrids had already grown detectable human skeletal muscle. Similar to the pig-pig chimeras, the team didn’t detect any signs that the human genes had sprouted cells that would eventually become neurons or other non-muscle cells.

For now, human-animal chimeras are not allowed to grow to term, in part to stem the theoretical possibility of engineering humanoid hybrid animals (shudder). However, a sentient human-pig chimera is something that the team specifically addressed. Through multiple experiments, they found no trace of human genes in the embryos’ brain stem cells 20 and 27 days into development. Similarly, human donor genes were absent in cells that would become the hybrid embryos’ reproductive cells.

Despite bioethical quandaries and legal restrictions, human-animal chimeras have taken off, both as a source of insight into human brain development and a well of personalized organs and tissues for transplant. In 2019, Japan lifted its ban on developing human brain cells inside animal embryos, as well as the term limit—to global controversy. There’s also the question of animal welfare, given that hybrid clones will essentially become involuntary organ donors.

As the debates rage on, scientists are nevertheless pushing the limits of human-animal chimeras, while treading as carefully as possible.

“Our data…support the feasibility of the generation of these interspecies chimeras, which will serve as a model for translational research or, one day, as a source for xenotransplantation,” the team said.