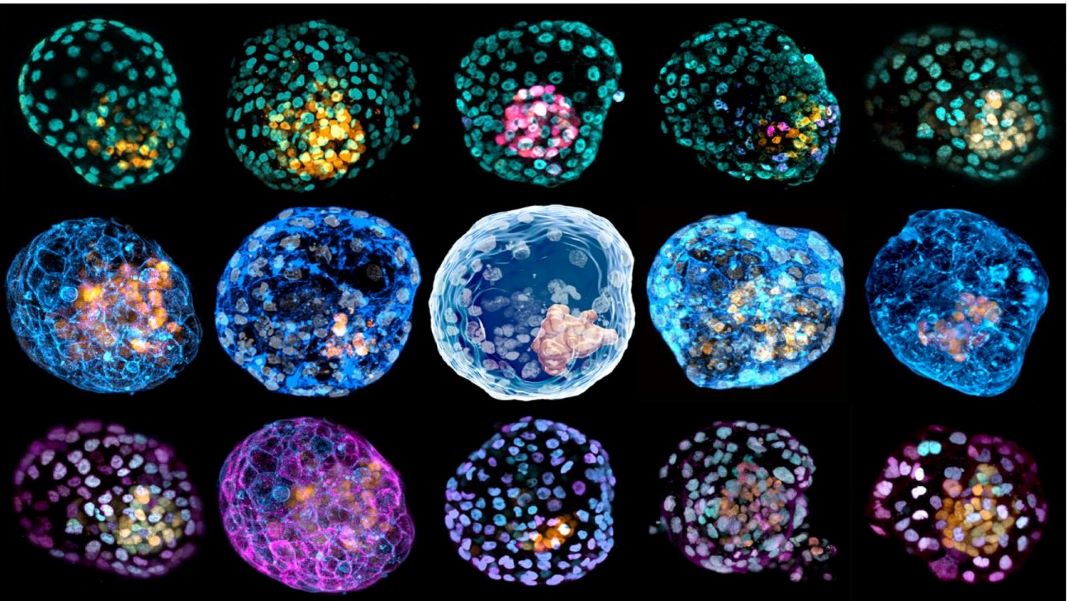 We all know how human reproduction works: sperm meets egg, fertilized egg kicks off its journey, transforms into a human embryo, then becomes a fetus and ultimately a baby.

But what if boy meets girl isn’t the only way?

To be clear, the teams did not engineer an artificial embryo that could develop into a viable baby. Rather, they replicated what happens during the first four days after an egg has been fertilized; it develops into a ball of cells called a blastocyst, the first station towards a full-formed baby.

Though they didn’t get beyond the blastocyst stage, both models are by far the most complete replicas of an early human embryo to date. They don’t just contain cells that grow into a baby, but also all of the supporting structures. Within just 10 days inside a Jello-like incubator, the reverse-engineered cells showed traits astonishingly similar to their natural counterparts. For example, the artificial embryos generated cells that form the placenta, which is critical for a viable embryo that could, in theory, develop further or even until birth.

“It’s the first complete model of the human early embryo,” said Dr. Jianping Fu at the University of Michigan, who was not involved in the study but wrote an accompanying perspectives piece. “This is an important milestone.”

These studies offer a new window into the first days of pregnancy, and may provide insight into previously inexplicable infertility or pregnancy loss without experimenting on human embryos.

Yet the sophistication of these cells is raising concerns. For now, because the artificial embryos differ from natural ones in several ways, scientists don’t expect them to have the ability to grow into complete embryos. As the technologies further refine, however, it may become possible to grow artificial human embryos for longer periods, putting the technology on a collision course with debates about the beginning of life.

The Unknowns of Human Development

The first 14 days of building a human are a mystery.

Scientists know that during a pregnancy, a fertilized egg develops into a blastocyst around day four, and it then implants around day eight. Around this time, something “magical” happens within the blastocyst, such that it churns out cells that eventually develop into the placenta, and others that give rise to a fetus.

The problem? This initial stage is incredibly hard to study. Thus far, scientists have relied on discarded human embryos in the lab—often from IVF outcasts—which can be grown to 13 days according to ethics guidelines. These tissue are hard to come by, and at this stage, said Dr. Jun Wu at the University of Texas Southern Medical Center, the proto-embryo is “essentially a black box.”

Scientists have previously tried to replicate the first days of development using mouse embryos. Back in 2018, a team grew similar blastocysts from mouse stem cells—an admirable effort, but not a perfect model as mice and humans have different development trajectories.

How They Did It

The two new studies represent the first time scientists have been able to make blastocyst-like structures from human cells.

In one study, Dr. Jose Polo at Monash University started with a previously published recipe. Here, skin cells are gently scraped off and bathed in a chemical soup that returns them to a stem cell-like state, meaning that they regain the ability to make other types of cells. From there, the pseudo stem cells (called iPSCs) are bathed in a nutritious liquid in a Petri dish. The team’s spark of insight came when they realized that after three weeks, the cells began to branch out into a potpourri of three different cell types found in early human embryos—something rarely seen before.

Inspired, the team then transferred the cells into a 3D jello-like culture system for support. Strangely, the cells began self-assembling with a mind of their own. “What was completely surprising is that when you put them together, they self-organize,” said Polo.

The strange “cells, assemble” moment prompted the team to analyze their genetics. To the shock of researchers, they found that these early embryo-like structures, dubbed “iBlastoids,” had a similar organization and cell component to their natural counterpart. One layer, for example, was populated by cells with a genetic signature that destined them as part of a placenta. Others looked remarkably similar to cells that eventually develop into an entire fetus.

The iBlastoid, in a sense, looked like a normal blastocyst after it implants in the uterus—without much probing from the researchers.

In the other paper, the team used a mix of human cells and stem cells to engineer what they called a “human blastoid.” As with the previous study, the artificial embryos were of similar size and shape to their natural counterparts and had a comparable genetic profile. Using a test that resembles implantation into a uterus but in a culture dish, the blastoids attached and continued to develop, with some reorganizing into structures that mimic the next stage of development.

Despite their eerie similarity to the real thing, for now, the authors stress, blastoids aren’t yet the real thing. Some of their layers of cells don’t seem to form very well, and some have cell types that shouldn’t be there. An efficiency rate of 10 percent in successful conversion from skin to blastoid also makes any scientist shudder.

Yet these problems can all be overcome, and the potential of blastoids isn’t lost on experts. Despite shortcomings, they’re the first “human embryo models that are derived from cultured cells,” and have “all of the founding cells” for the growth of a fetus, said Fu. For the first time, we may be able to test potential causes of infertility or pregnancy loss at a much higher throughput, which can then be further verified.

“You could use 1,000 or 10,000 iBlastoids to discover something, and then you could go and test that discovery in three blastocysts,” said Polo.

As the technology is further optimized, however, the tricky question of the identity of a blastoid can’t be ignored. Given their similarly to the real thing, at what point should they be treated as cloned human embryos? Is it ethical to destroy them? Currently, human embryos are allowed to grow in the lab for 14 days internationally. Do those rules apply?

Looking ahead, the debate goes even further. Scientists have been working to reprogram skin cells into reproductive cells for years in an effort to help couples who cannot otherwise conceive. Healthy mice have already been born from skin cells transformed into egg cells. While a long way away, the current studies are taking a step in that direction.

A separate study last week showed that it’s possible to grow a mouse fetus through half of its gestation in an artificial womb—a record for mammals, and one that further dissociates reproduction from the age-old “sperm meets egg” story. Can we one day clone a human baby using someone’s skin cells, then grow it in an artificial womb without any resemblance to natural reproduction? Should we?