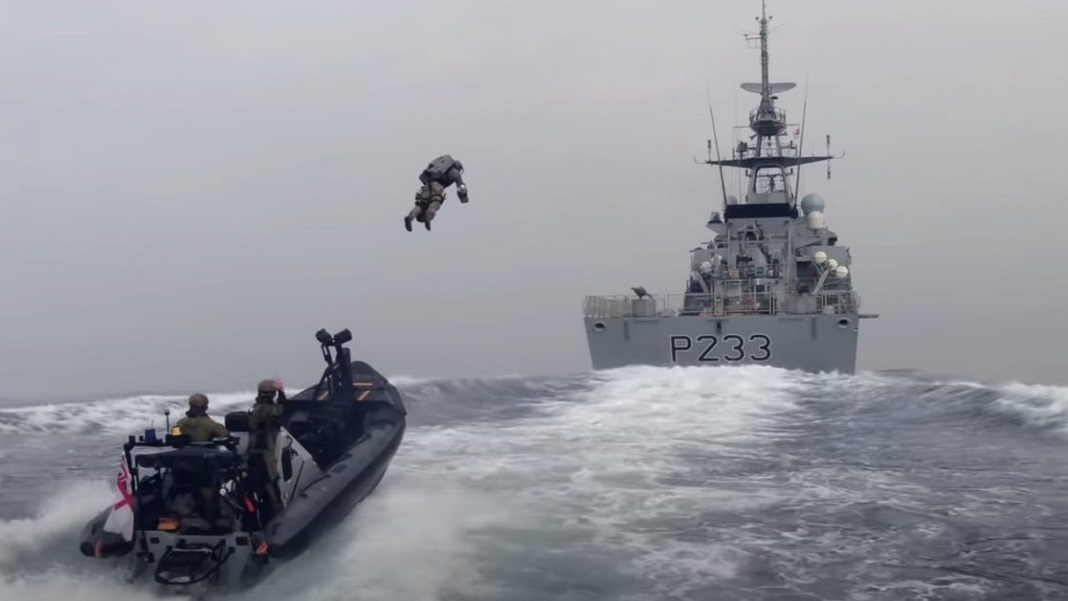 Last year, a guy in a jet suit glided up a mountain to trial whether jet suits could be a useful tool for emergency responders in wilderness areas. It went pretty well; the jet suit-clad pilot reached the mountainside location in 90 seconds, as compared to the 25 minutes it would have taken an emergency responder on foot. Now the same suit is being trialed by the British Royal Marines as a possible tool for boarding ships at sea.

In what sort of situation would you need to fly onto a ship? To fight pirates, for one.

The jet suit is made by UK-based Gravity Industries, whose founder Richard Browning was himself in the Royal Marine Reserves for a time. Having set and then broken the Guinness World Record for the fastest speed flown in a body-controlled jet engine powered suit (who knew world records got so specific?) in 2019, Browning started looking for practical and humanitarian applications for his invention.

Boarding a ship that’s been hostilely taken over isn’t an application that would have come to many peoples’ minds (my own included), but it seemed to work pretty well, albeit in a staged simulation where no one was using weapons. During the trial, Gravity Industries employees operated the jet suit, using it to board a Royal Navy Batch 2 River-class offshore patrol ship called the HMS Tamar.

The jet suit wearer took off from a speedboat moving behind the much larger ship, more or less as would be done in a true “visit, board, search, and seizure,” or VBSS, which is military speak for getting on a ship whose captain or crew don’t want you there; it applies in situations like trying to capture an enemy ship or intercept terrorists or smugglers—or pirates.

Once on board the HMS Tamar, the pilot dropped a rope ladder for the other people on the speedboat to board the ship. If you saw the excellent 2013 movie Captain Phillips, you may remember the scene where the pirates are able to get past the ship’s water hoses and fire bombs, pull up next to it, attach a ladder, and climb right on; chaos and destruction ensue.

Gravity envisions the jet suit being able “to provide extremely rapid access to any part of the target vessel, instantly freeing up hands to bear a weapon, and even retaining the capability to relocate on target or self-exfiltrate.” I mean, how much easier would it have been to rescue Tom Hanks with a jet suit? (to whatever extent the movie is accurate, though, a bullet-proof version may not be a bad idea).

Piracy is, unfortunately, still a very real problem. As one expert notes, 2000 through 2011 saw high levels of pirate activity, with the Gulf of Aden area off the coast of East Africa becoming the most pirate-infested part of the world, and the most dangerous for cargo ships. Efforts to make ships more secure, patrol waters more thoroughly, and improve health and education services on land all helped curb attacks on ships from 2012 to 2019. The economic hardship brought by the pandemic, however, likely contributed to an increase in attacks last year, and the outlook going forward is uncertain.

The British Marines haven’t publicly stated whether they plan to move forward with employing jet suits; with a price tag of around $400,000, they’d be a significant investment, and army personnel would need to be trained to use them—though Browning told Digital Trends that “the way this thing flies is very much an intuitive part of your body,” adding that people have gotten the hang of it “in four or five goes, with each go just lasting around 90 seconds.”