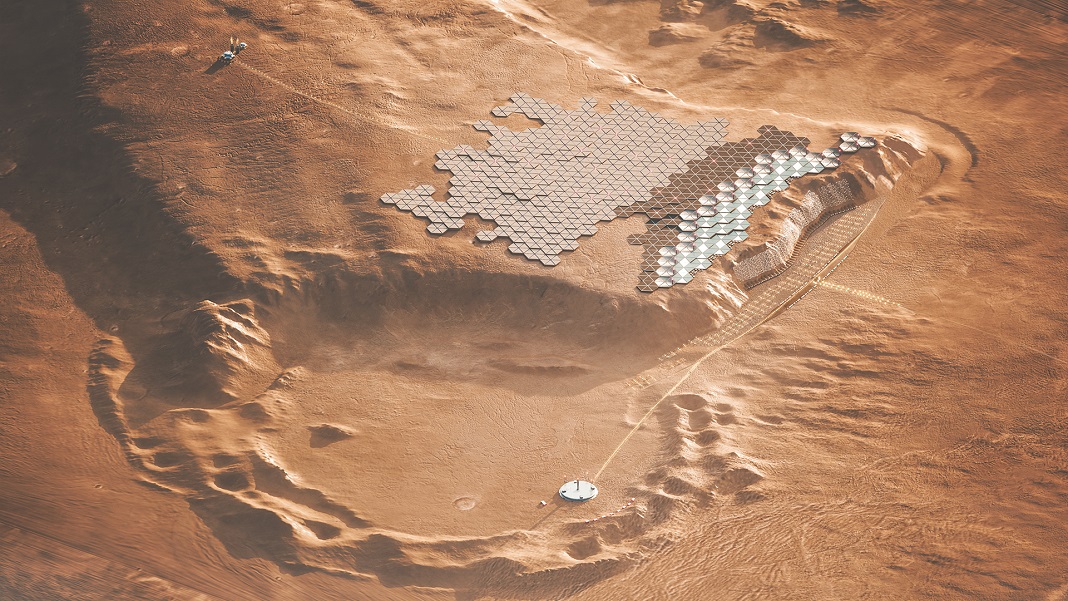 Despite being able to land rovers on Mars and fly helicopters there, it seems humans are still somewhat far away from actually setting foot on the red planet. But for an endeavor as unprecedented as colonizing another planet, you have to dream big—and plan ahead. That’s what an international team of scientists and other experts are doing, and they’ve come up with not just a design, but a full-fledged plan to build the first Martian city, complete with sustainable housing, food, transportation, and energy.

Described in a paper published in March, the city is the brainchild of architecture firm ABIBOO Studio and a multidisciplinary group of space experts from academia and the private sector called SONet (short for Sustainable Offworld Network). The Mars Society solicited plans for a Martian city in 2020, and this design, called Nüwa, was one of several finalists. A video that looks like it could’ve come straight out of a Hollywood sci-fi movie gives a glimpse of the design.

Nüwa would be the capital in a design made up of five linked cities, each housing 200,000 to 250,000 people. Nüwa’s location, Tempe Mensa, was chosen because its geography will act as a natural shield from radiation; the area contains an expansive mesa bordered by tall sheer cliffs, and the idea is to excavate those cliffs and build the city inside. The location and design would also give residents indirect access to sunlight, protect them from meteorites if one were to strike nearby, and help minimize the difference in atmospheric pressure between the inside and outside of the buildings.

“If we were to construct the buildings as on Earth, the buildings would tend to explode from the pressure. The solar and gamma radiation on Mars forced us to build spaces that are not directly exposed to the sky,” said Alfredo Muñoz, founder of ABIBOO Studio, in a press release.

The “macro-buildings” designed for the city are modular and in the shape of huge tubes (10 meters wide by 60 meters long), with different models meant for living and working. The modules would be linked by tunnels and elevators, not unlike those found in urban areas on Earth. All the modules include space for green areas, as well as areas called “snow domes” that would help dissipate heat and clean the air through condensation. Each macro-building would have an air shower at its entrance, which visitors would use to sterilize microbes and other potentially harmful matter.

Infrastructure for food and energy production will be built on the flat top of the mesa. Since transporting any type of material from Earth to Mars on a regular basis would not only take months, but be cost-prohibitive, the city would need to be self-sustaining, with all the inhabitants’ needs able to be met using local material. Seems tricky since Mars is currently a desolate stretch of reddish rock with no identifiable life forms, right?

“As the city grows, it has to be able to depend only on the resources directly on Mars and recycling as much as we can,” said Gisela Detrell, an aerospace engineer who is part of the project. “All the ways that we humans produce, we should be able to produce enough oxygen, water, and food to sustain humans and close the cycle almost completely.”

Residents’ main source of food would be hydroponic crops grown in dedicated modules where the air would be enriched with CO2, and crop maintenance and harvesting carried out by automated systems—perhaps similar to some highly-automated vertical farms already in operation on Earth. There aren’t a lot of details about what crops specifically will be grown, though the team notes that algae would be a critical part of Nüwa residents’ diets.

And, unsurprisingly, the red planet won’t be a great place for meat-loving carnivores. The plan mentions cellular meat production and “relatively small” farming areas for animals and insects, but given the resources and energy required to produce livestock—which we’re having a hard enough time with here on Earth—meat will be a minimal part of the Martian diet.

“It’s got experts behind it, and it was innovative in the way we solved so many of the challenges we’ll face while setting up a Mars settlement,” said Munoz. “We did it in a very scalable manner, creating spaces that will be potentially exciting and beautiful.”

The team estimates that construction on the city could start by 2054, with the first residents moving in around 2100—but these are very much estimates, with many impacting factors that could end up making for a different timeline; though it’s over 30 years away, the target seems ambitious given that humans have yet to even get close to going to Mars.

The name Nüwa comes from a goddess of Chinese mythology. Depicted in ancient art as a snake’s body with a human head, Nüwa was seen as a creator who shaped the first human beings out of clay, and was known for creating and reproducing people after a great calamity. Hopefully this last aspect of the name won’t be applicable to the Martian city; in any case, to quote Matt Damon in The Martian (and there was perhaps never a more relevant time or place for this quote), Nüwa’s designers and engineers will “have to science the sh*t out of this.”