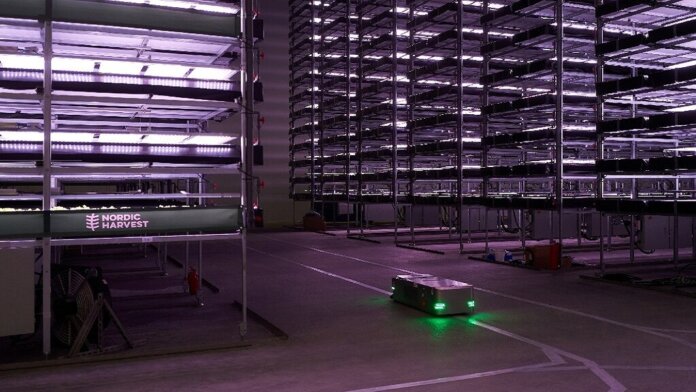 From cultured meat to plant-based foods to robotic kitchen assistants, tech seems to be infiltrating every corner of our food system. And it’s a good thing, because we’re sorely in need of ways to make more and better-quality food using fewer resources.

One rapidly-spreading technology that’s doing just that is vertical farming, which uses LED lights and a heavily-controlled indoor environment to grow produce with dramatically less water, space, or fertilizer than in traditional agriculture.

There are vertical farms all over the world, from Singapore to the UK to the US. And this week, the first phase of construction was completed on what will be a major addition to the industry.

The new facility is in Denmark, in an area called Taastrup outside of Copenhagen. At 7,000 square meters (just over 73,000 square feet), it will be the biggest vertical farm in Europe. Crops will grow in stacks 14 layers high and will use more than 20,000 LED lights.

Beyond the abundance of layers and lights, it takes automation to the next level; little robots on wheels will be tasked with delivering seeds to the various rows of stacked growing shelves. Sensors combined with smart software will monitor and process more than 5,000 different data points; a key one, for example, is the intensity of the LED light as it relates to the stage of growth the plant is in.

Amid all this, greens will reportedly be grown using just one liter of water per kilogram of produce, which is a whopping 250 times less than what’s used in traditional agriculture. Rather than needing to be watered, the plants actually sit in grow trays with their roots extending into shallow troughs of nutrient-rich water. And all that light from the LEDs? It’ll come from electricity generated by wind; almost half of Denmark’s total power is sourced from wind, and the farm’s creators felt that using this sustainable source of energy was the optimal choice.

As Nordic Harvest’s website points out, consumers in the West are spoiled. We’ve gotten used to being able to buy and eat whatever fruits and vegetables we desire at any time of year. Blueberries in February? Sure! Oranges in July? Why not! Produce that’s out of season costs us a little more at our local grocery store, and it’s probably flown or shipped in from thousands of miles away, but hey—sometimes you just want to make a cherry pie from scratch in the middle of winter.

The supply chain to get these fresh foods from point A to point B is no small endeavor, though. From keeping fruits or veggies cold and pest-free for the journey to making sure they arrive unblemished to using chemicals to keep them fresher for longer, this system puts a lot of strain on both the environment and on the foods themselves.

Vertical farms will change this. Sure, they may not be able to grow everything under the sun—for now they’re mostly limited to greens like lettuce, spinach, kale, etc.—but they can grow the same quantity and quality of crops year-round, and they’ll redefine the meaning of “eating local.” If enough of them pop up, they could even help allow some farmland to be reforested.

According to Nordic Harvest’s website, if it established more sites like Taastrup and grew greens in a space equaling the size of 20 soccer fields, this would allow Denmark to become “self-sufficient in salads and herbs” rather than importing them from other countries; currently only 30 percent of Denmark’s consumption of these items is grown domestically.

Not only will Taastrup grow produce locally, it will grow it quickly. The facility plans to harvest the layered greens 15 times a year, for an output totaling 1,000 metric tons annually. “In this kind of growing method…you won’t be influenced by the climate, so you can [grow on] a new schedule,” said Stella Tsai, YesHealth Group’s general manager.

The facility plans to start producing in the first quarter of next year, and expects to be profitable next year too, reaching its full 1,000-ton capacity by the end of 2021.