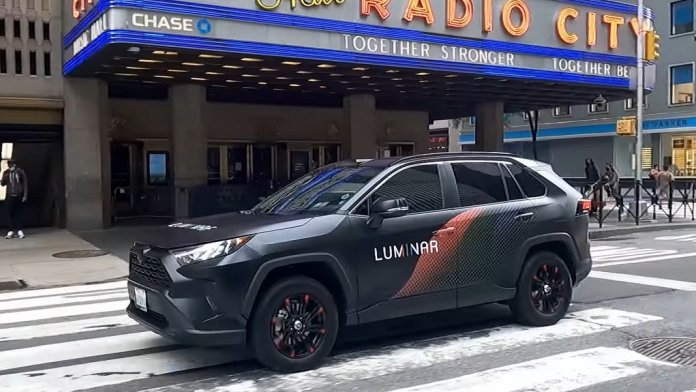 As a recent New York Times article highlighted, self-driving cars are taking longer to come to market than many experts initially predicted. Automated vehicles where riders can sit back, relax, and be delivered to their destinations without having to watch the road are continuously relegated to the “not-too-distant future.”

There’s not just debate on when this driverless future will arrive, there’s also a lack of consensus on how we’ll get there, that is, which technologies are most efficient, safe, and scalable to take us from human-driven to computer-driven (Tesla is the main outlier in this debate). The big players are lidar, cameras, ultrasonic sensors, and radar. Last week, one lidar maker showcased some new technology that it believes will tip the scales.

California-based Luminar has built a lidar it calls Iris. Iris not only has a longer range than existing systems, it’s also more compact; gone are the days of a big, bulky setup that all but takes over the car. Perhaps most importantly, the company is aiming to manufacture and sell Iris at a price point well below the industry standard.

Lidar scans a vehicle’s surroundings by sending out pulses of light in or near the visible spectrum, illuminating targets then analyzing the reflections that come back and using them to create high-resolution 3D ‘maps.’ Advances in laser technology and computing speed over the last decade or so made lidar a more viable technology for widespread use.

Earlier iterations used spinning mirrors to direct the light beams, but that made for clunky systems with lots of moving parts. In 2016 Quanergy unveiled the first solid-state lidar, the S3, steered with a chip containing a million tiny antennas. With a range of 200 meters, the company planned to sell the S3 for $250 (at least three of these would be required to give the vehicle full visibility, putting the cost at $750).

Iris uses waves of light up to 1,550 nanometers long (905 nanometers is the standard). The longer length yields increased visibility, allowing the map to incorporate objects others might miss, whether because they’re small, don’t reflect light well, or are too far away.

Luminar says Iris can detect and classify objects up to 250 meters away, or 500 meters for larger objects, and can detect the speed of moving objects in 3D (like a car changing lanes or a pedestrian stepping into the street). Rather than multiple lasers working in concert, Iris has just one laser and accompanying receiver, with two axis scanning mirrors giving the lidar a 120-degree by 30-degree field of vision.

Luminar CEO Austin Russell estimates Iris will initially be priced at around $1,000, and over time brought down to $500. Just two years ago, Wired reported industry leader Velodyne’s lidar costing “about $75,000.” Since then, though, Velodyne has also begun work on a solid-state lidar it aims to price below $500.

Luminar plans to integrate Iris into robotaxis and self-driving trucks through a design it’s calling Blade, a sleek gold-colored strip encircling the vehicle and containing all its sensors.

One of the most vocal detractors of lidar has been Elon Musk, who called the technology “a fool’s errand” and said anyone relying on it was “doomed.” A May sighting of a Tesla Model Y outfitted with Luminar lidar caused some speculation about whether Musk was reversing course, but as one analyst pointed out, it’s more likely that Tesla is using lidar to test and validate its own self-driving system, which relies primarily on cameras.

With or without Tesla as a customer, though, Luminar seems to be doing fine: the company made headlines last year when it secured a contract with Volvo, saying the Swedish automaker’s cars would reach Level 3 autonomy in 2022. As reported by The Verge, Luminar also has deals with Audi, Toyota Research Institute, Daimler, and Chinese automaker SAIC, among others.

A lot of the discussion around self-driving cars focuses on the supposed safety improvements the technology will herald. Humans, the story goes, are negligent and at times even reckless, the cause of over 33,000 accidents and 36,000 deaths per year in the US alone. But putting these huge-sounding numbers in context, you could actually argue that humans are very good at driving; there’s about one death from motor vehicle crashes per 100 million miles traveled.

Nevertheless, no fatalities is better than some, and that’s what Luminar wants (well, Luminar and anyone who’s ever driven or ridden in a car). Russell told The Verge that the company is “moving towards the vision of zero collisions, building the uncrashable car.” It will be a while yet before we can determine who’s the better driver, but incremental advances like Iris seem to indicate that computers are (slowly) catching up to us.