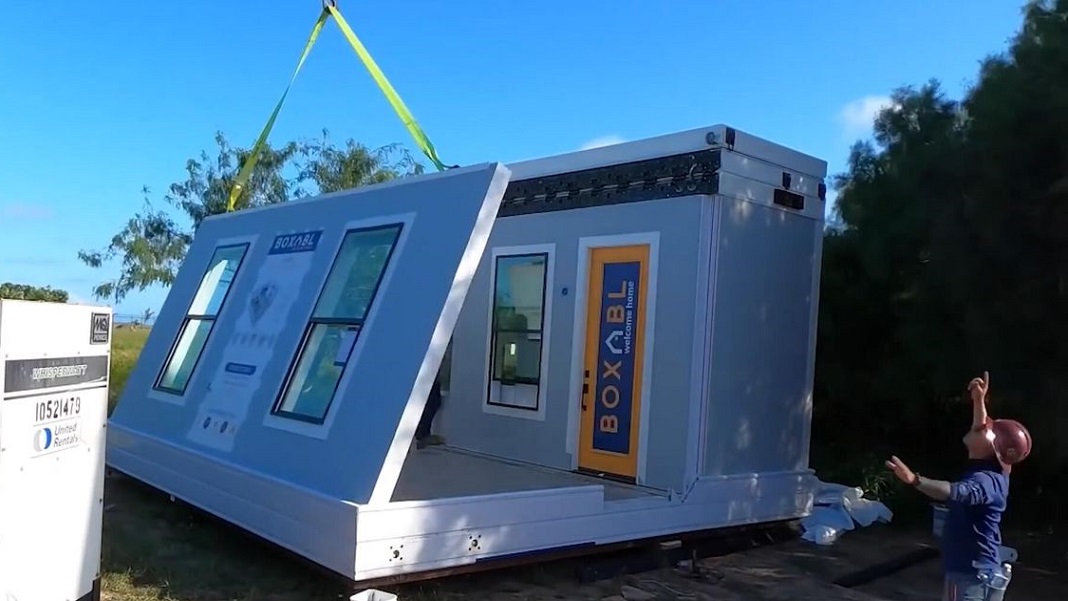 3D printing has become the hottest new construction technology of the past few years, with houses being laid down in California, Texas, New York, Mexico, Canada, Italy, and Germany, to name just a few. There’s no doubt it’s an efficient, low-cost way to build durable homes, with the added bonus of a wow-factor (which may soon expire given how fast the method seems to be proliferating).

But one company is taking a totally different route to affordable, easy-to-build housing: foldable homes.

If, like me, your first thought was “Foldable? That doesn’t sound like something I’d want to live in, or something anyone should live in, for that matter”—hear me out. The company producing the homes is called Boxabl, and they’re made of steel, concrete, and EPS foam (this stands for expanded polystyrene, and it’s used as insulation).

The houses were unveiled at the International Builders Show in Las Vegas, where Boxabl is based, in March. But they’ve recently started to get a lot more attention after a tweet by Elon Musk raised suspicions that he lives in one. There’s since been some confusion about whether Musk’s Boca Chica, Texas house is actually a Boxabl or a similar pre-fabricated home from a different builder, but either way, it’s been good publicity for Boxabl.

The company’s first model, and the only one currently available, is 400 square feet—about the size of a studio apartment—and they’re calling it the Casita. It costs $49,500 and can be set up in a day once it’s delivered. It comes as a 20-foot-wide load that can be shipped on an 8-foot footprint; that means it can be hauled by a pickup truck or SUV (perhaps not coincidentally, one video shows a Boxabl house being pulled by a Tesla Model X), and the shipping costs are far lower than those of traditional mobile and prefab homes.

The kitchen and bathroom are on the same side of the house, with items like the refrigerator, toilet, and sinks already built in. This section stays upright throughout the shipping process. Upon arrival, the house just needs to be “unfolded.” It can be bolted to any foundation using connector plates.

“The actual setup of the unit itself is very fast,” said Boxabl co-founder Galiano Tiramani. “We’ve done it here in under an hour. It really just unfolds and bolts down, and you’re good to go.” By “here” he means in the factory, where setup is likely easier than in a real-world setting, particularly because the home’s electrical, plumbing, and HVAC all need to be hooked up.

Nonetheless, this can all be completed in a day, particularly at sites where the electrical and plumbing hookups are ready and waiting. It’s worth noting that the listed price of $49,500 is just for the house; it doesn’t include the necessary utility hookups, foundation, and permits. Boxabl estimates these costs could range from $5,000 on the low end up to $50,000, depending on location and complexity of the site. The land you put the house on is a separate cost too, and would obviously vary widely based on location.

Boxabl will soon open a new factory in Las Vegas that will be able to produce one house every 90 minutes, and Tiramani estimates an annual output of 3,600 houses.

Though there’s no 3D printing involved in the manufacturing, there will be a good deal of automation. Robotic arms will lift and move the wall panels from one step of the process to the next, placing them on lazy-susan-like rotating pallets, where they’ll go from lying flat to standing up to being connected together then folded up.

If you’re still wondering about safety, fear not. Boxabl’s website says its homes are resistant to bugs, water, fire, wind, and mold. “Waterproof” would be a bit more reassuring than “water-resistant” (I mean, we’re not talking about a raincoat here, and even if we were, the same would apply!), but it seems this is just semantics; since there’s no lumber or sheetrock used for the walls, it’s virtually impossible for water to warp or corrode them.

“If your Boxabl floods, the water drains out, and the structure is undamaged,” the website states, adding that both the interior and exterior walls are covered in non-combustible materials for fire resistance, and the houses can handle hurricane-speed winds. It certainly seems they’ve covered all the bases.

The company plans to expand on its offerings with new shapes and sizes, which will likely be modular so customers can design their homes to fit their needs. Apparently over 1,000 people have already reserved a Casita, which can be done on Boxabl’s website either by paying full price up front, giving a deposit of $1,200 or $200, or for free (but you’ll be last in line, and let’s be honest, they probably won’t start making a house for you until you’ve put down some cash).

Like 3D printed homes, Boxabl’s innovation seems promising as a source of affordable housing, and could become a major new player in the industry. However, also like its 3D printed counterparts, one of Boxabl’s big limitations is that it requires an empty piece of land at ground level—and these are exactly what’s scarce in dense urban centers, and often even in surrounding suburbs.

But with more people leaving cities post-pandemic and many companies implementing flexible work policies, we may not see urban populations grow as fast as expected. Either way, don’t be too surprised if you see a small, sleek, folded-up house pull into your neighborhood on the back of a truck sometime in the next couple years.