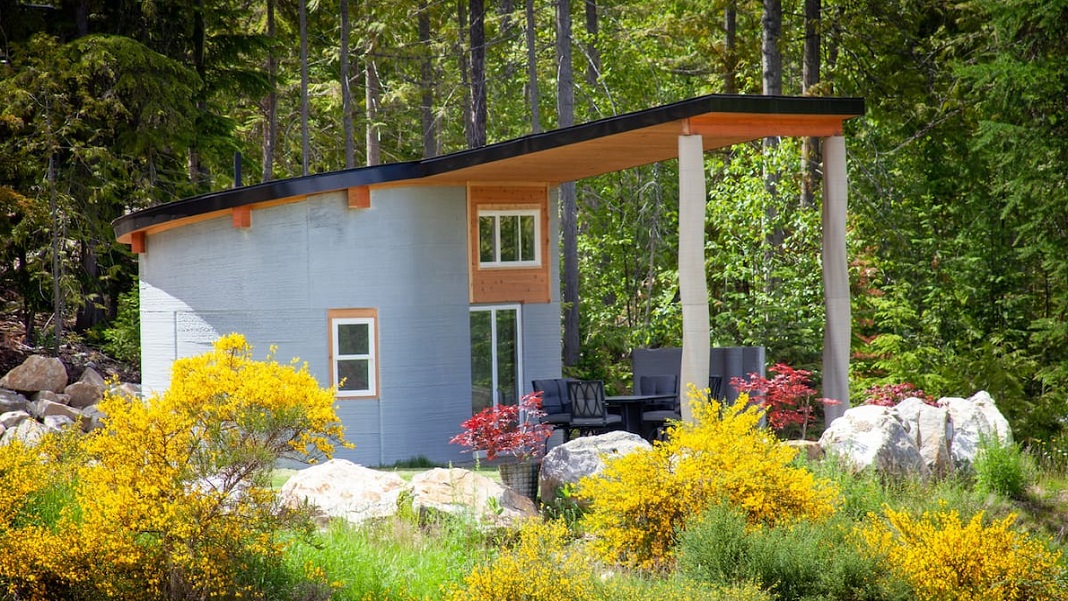 3D printing has been increasingly gaining traction over the past couple years as a low-cost way to build comfortable, durable homes. The technology quickly went from a proof of concept (when the first permitted 3D printed home in the US was unveiled at SXSW in 2018) to a proven success, with 3D printed homes either already sold or in the works in New York, Texas, and California.

What if you like the idea of living in a 3D printed house, but aren’t quite ready to take the plunge and buy one? Maybe you want to try it out first, get a feel for what it’s like to live within walls that were laid down layer by layer rather than pieced together with two-by-fours and drywall. How are the acoustics? And the temperature control? General sturdiness?

For those who want to try before buying—or try just for kicks—good news: there’s now at least one 3D printed house available to rent on Airbnb.

A newly-unveiled 3D printed tiny house is located in Procter, British Columbia, Canada, on what looks to be a breathtakingly scenic plot of land complete with mountain vistas, tall pine trees, and a lake. Its creators named it the Fibonacci House because of its spiral shape; the design avoids straight lines as much as possible, and from above its walls look a lot like a seashell.

At 35 square meters (377 square feet), the space inside is small, but appears to be pleasant and functional, with a kitchenette, living area, bathroom, and lofted sleeping space to accommodate four people.

Besides being a cool spot for vacationers to land for a few days, the house also has a greater purpose associated with it. Money earned from bookings will be used by nonprofit World Housing to build affordable homes for people in need. Specifically, there are already plans in the works for a community of five 3D printed houses, called Sakura Place, where preference will be given to single mothers in need of housing.

Several nights in July and August are already booked, with a reasonable nightly rate of $129, making the house relatively accessible to 3D-curious travelers.

Though Fibonacci House claims to be the world’s first 3D printed home for rent on Airbnb, it appears to have at least one predecessor; a listing in San Diego has been accepting guests since last September, and it appears to be one of Mighty Buildings’ 3D printed backyard houses. With five-star reviews all around, the listing bodes well for the future of 3D printed vacation homes, whether tiny and rural, larger and urban, or something in between.