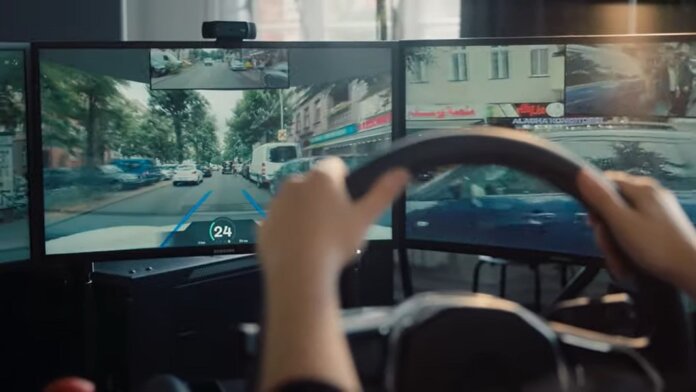 Self-driving cars are taking longer to hit roads than many experts predicted. Despite impressive progress in the field—like trucks using self-driving features to move freight more efficiently, Waymo launching its robotaxi service for vetted riders in San Francisco, or Tesla rolling out version 10 of its full self-driving software—we’re a long way from ubiquitous Level 5 autonomy.

What if there was some sort of in-between, a workaround to give us a glimpse of a future where empty cars deftly navigate city streets? A Berlin-based startup called Vay has come up with just such a solution, and it is, in short, creative, unexpected—and sort of ingenious.

Rather than ceding full control of cars to software from the get-go, Vay plans to use human “teledrivers” to drive cars remotely. Sound a lot like a real-life video game? I thought so too—and in the most tangible of ways, it is. Teledrivers sit at stations that closely resemble an arcade game, complete with steering wheel, pedals, and monitors.

Of course, in crucial ways the teledriving doesn’t resemble an arcade game. Vay emphasizes that its system was built with safety front of mind, with extra precautions against the top four causes of accidents in urban areas: driving under the influence, speeding, distraction, and fatigue.

These days, distraction probably takes the cake, because let’s be honest, we all look at our phones while driving. Teledrivers, on the other hand, will be fully engaged with the driving environment (hopefully, their phones won’t even be within reach), and are vetted and trained by the company. The monitors they look at while operating a car also give them a 360-degree view around the car.

Here’s how Vay’s service will work for consumers. Using a smartphone app, you’ll hail a car, much like you would with Uber or Lyft—except the car will pull up empty (having navigated to your location via a teledriver), and you’ll get in and drive yourself to your destination. Upon arrival, you get out and get on your way, and the teledriver takes over again, driving the car to its next passenger.

Perhaps most intriguing of all, Vay claims its rides will cost just “a fraction” of what Uber and Lyft currently charge for rides. Between that and the added bonus of not having to make small talk with drivers or pool passengers (am I right, introverts?), Vay may really be onto something.

The company’s CEO, Thomas von der Ohe, has some experience with automation, having worked on Amazon’s Alexa and at Zoox, a robotaxi startup Amazon bought in 2020. Scaling up the level of automation is one of Vay’s goals, though it seems they won’t be in a huge hurry to do so, saying it will launch autonomous features gradually based on data gathered by teledriving, and that it believes “we will enter a decade of human-machine collaboration instead of directly reaching full autonomy.”

Again, they may be onto something. All the hype around self-driving cars has consumers eagerly anticipating their arrival, but between a complex regulatory environment, ongoing safety concerns, and the stark fact that exceeding or even matching the human brain’s ability to operate a vehicle is really, really hard, the “finish line” of Level 5 autonomy will likely remain elusive for years to come—if not a decade or more.

In the meantime, providing alternate solutions that help ease us into a driverless future, maybe while saving us money and making roads safer, seems like a good course of action.

Vay does have some big hurdles yet to clear.

For one, it will be interesting to see what sort of solutions the company devises for matching supply to demand; Uber and Lyft use surge pricing when ride requests outnumber drivers, and drivers can choose to go on duty at busy times when prices are high. In Vay’s case, the number of teledrivers sitting at their arcade-game-like stations at any given time will be fixed. The company will also have to get approvals from regulators in the cities where it plans to offer its service, and gain consumer trust (which may not be too hard given that when you’re in the car, you’re controlling it).

Vay is currently testing its teledriven vehicles in Berlin, and aims to launch its service in Europe and the US next year.