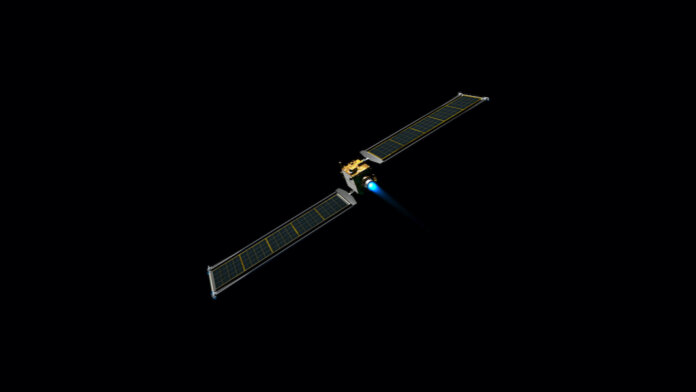 In March of this year, a quarter-mile-wide asteroid flew through space at a speed of 77,000 miles per hour. It was five times farther from Earth than the moon, but that’s actually considered pretty close when the context is the whole solar system.

There’s not a huge risk of an asteroid hitting Earth anytime in the foreseeable future. But NASA wants to be ready, just in case. In April the space agency led a simulated asteroid impact scenario, testing how well federal agencies, international space agencies, and other decision-makers, scientific institutions, and emergency managers could work together to avert catastrophe.

Now another asteroid-deflecting initiative is underway, but this time, it’s getting much more real.

There’s still no danger of anything colliding with Earth or threatening human lives. But NASA’s DART mission plans to purposely crash a spacecraft into an asteroid to try to alter its path.

DART stands for Double Asteroid Redirection Test, and NASA has just set its launch date for November 23 at 10:20 pm Pacific time. The spacecraft will launch on a SpaceX Falcon 9 rocket from Vandenberg Air Force Base, located near the California coast about 160 miles north of Los Angeles.

From there, it will travel to an asteroid called Didymos, taking about a year to arrive (it’s seven million miles away) and using roll-out solar arrays to power its electric propulsion system.

Didymos is 2,560 feet wide and completes a rotation every 2.26 hours. It has a secondary body, or moonlet, named Dimorphos that’s 525 feet wide. The two bodies are just over half a mile apart, and the moonlet revolves about the primary once every 11.9 hours.

Using an onboard camera and autonomous navigation software, the spacecraft will crash itself into the moonlet at a speed of almost 15,000 miles per hour. NASA estimates that the collision will change Dimorphos’ speed in its orbit around Didymos by just a fraction of one percent, but that’s enough to alter Dimorphos’ orbital period by several minutes, enough to be observed and measured from telescopes on Earth.

NASA plans to capture the whole thing on video. Ten days before DART’s asteroid impact, the agency will launch a miniaturized satellite, called LICIACube, equipped with two optical cameras. The goal will be for the cubesat to fly past Dimorphos around three minutes after DART hits its moonlet, allowing the cameras to capture images of the impact’s effects.

And that’s not all the observation the mission will get. The European Space Agency plans to launch its Hera spacecraft (named for the Greek goddess of marriage!) in 2024 to see the effects of DART up close and in detail. As the agency notes in its description of the Hera mission, “By the time Hera reaches Didymos, in 2026, Dimorphos will have achieved historic significance: the first object in the solar system to have its orbit shifted by human effort in a measurable way.”

You can watch NASA’s coverage of the DART launch on NASA TV via the agency’s app and website.