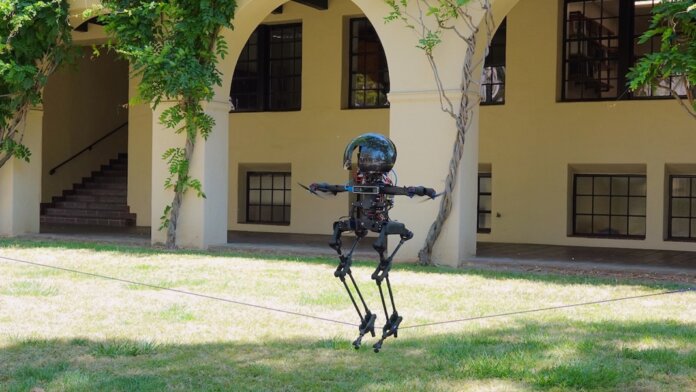 Most animals are limited to either walking, flying, or swimming, with a handful of lucky species whose physiology allows them to cross over. A new robot took inspiration from them, and can fly like a bird just as well as it can walk like a (weirdly awkward, metallic, tiny) person. It also happens to be able to skateboard and slackline, two skills most humans will never pick up.

Described in a paper published this week in Science Robotics, the robot’s name is Leo, which is short for Leonardo, which is short for LEgs ONboARD drOne. The name makes it sound like a drone with legs, but it has a somewhat humanoid shape, with multi-joint legs, propeller thrusters that look like arms, a “body” that contains its motors and electronics, and a dome-shaped protection helmet.

Leo was built by a team at Caltech, and they were particularly interested in how the robot would transition between walking and flying. The team notes that they studied the way birds use their legs to generate thrust when they take off, and applied similar principles to the robot. In a video that shows Leo approaching a staircase, taking off, and gliding over the stairs to land near the bottom, the robot’s motions are seamlessly graceful.

“There is a similarity between how a human wearing a jet suit controls their legs and feet when landing or taking off and how LEO uses synchronized control of distributed propeller-based thrusters and leg joints,” said Soon-Jo Chung, one of the paper’s authors a professor at Caltech. “We wanted to study the interface of walking and flying from the dynamics and control standpoint.”

Leo walks at a speed of 20 centimeters (7.87 inches) per second, but can move faster by mixing in some flying with the walking. How wide our steps are, where we place our feet, and where our torsos are in relation to our legs all help us balance when we walk. The robot uses its propellers to help it balance, while its leg actuators move it forward.

To teach the robot to slackline—which is much harder than walking on a balance beam—the team overrode its feet contact sensors with a fixed virtual foot contact centered just underneath it, because the sensors weren’t able to detect the line. The propellers played a big part as well, helping keep Leo upright and balanced.

For the robot to ride a skateboard, the team broke the process down into two distinct components: controlling the steering angle and controlling the skateboard’s acceleration and deceleration. Placing Leo’s legs in specific spots on the board made it tilt to enable steering, and forward acceleration was achieved by moving the bot’s center of mass backward while pitching the body forward at the same time.

So besides being cool (and a little creepy), what’s the goal of developing a robot like Leo? The paper authors see robots like Leo enabling a range of robotic missions that couldn’t be carried out by ground or aerial robots.

“Perhaps the most well-suited applications for Leo would be the ones that involve physical interactions with structures at a high altitude, which are usually dangerous for human workers and call for a substitution by robotic workers,” the paper’s authors said. Examples could include high-voltage line inspection, painting tall bridges or other high-up surfaces, inspecting building roofs or oil refinery pipes, or landing sensitive equipment on an extraterrestrial object.

Next up for Leo is an upgrade to its performance via a more rigid leg design, which will help support the robot’s weight and increase the thrust force of its propellers. The team also wants to make Leo more autonomous, and plans to add a drone landing control algorithm to its software, ultimately aiming for the robot to be able to decide where and when to walk versus fly.

Leo hasn’t quite achieved the wow factor of Boston Dynamics’ dancing robots (or its Atlas that can do parkour), but it’s on its way.