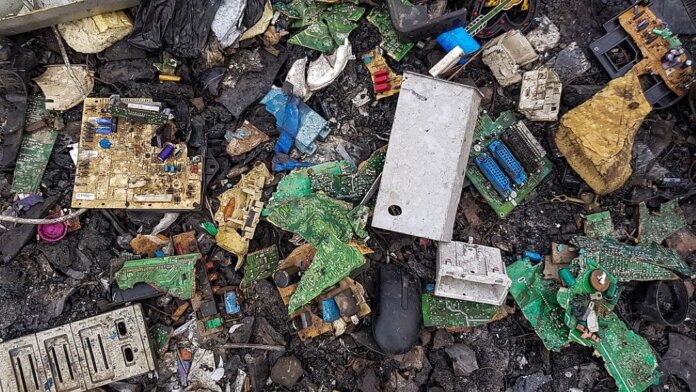 It’s widely known that the world has a plastics problem. From landfills to the ocean, the stuff is everywhere, and our conscientious efforts to recycle don’t do nearly as much good as we think.

What’s less widely known is that we have a similar problem with another kind of waste: electronics. A report published this week on WEEE Forum revealed that the total waste electronic and electrical equipment from 2021 will weigh an estimated 57.4 million tons. That’s heavier than China’s Great Wall, which is the heaviest man-made object on Earth.

Not surprisingly, the amount of e-waste generated each year is steadily increasing. For one, as the global middle class grows, more people can afford to buy electronics (and to buy new ones when their old ones break, rather than getting the old ones repaired). Also, the prices of many electronic items tend to trend downwards as their manufacture is scaled up, their technology improves, supply chains are streamlined, etc. (given the global chip shortage, the next couple years may be an exception to this trend).

E-waste appears to be growing by three to four percent per year. In 2019 the total reached 53.6 million tons; that was 21 percent higher than 2014’s total. If we stay on this trajectory, annual global e-waste will reach 74 tons by 2030.

Product manufacturers aren’t helping the situation; building products with shorter life cycles, making repairs too expensive or difficult to undertake, and continually releasing new iterations means people are likely to either cast aside their perfectly-good iPhones/tablets/laptops for newer models, or decide that repairing a non-working device isn’t worth the trouble and opt for buying a brand-new one. Do you have at least one working (or partially-working) cell phone or laptop sitting in a drawer somewhere, untouched for months or years? Yeah, me too.

“When you buy an expensive product, whether it’s a half-a-million-dollar tractor or a thousand-dollar phone, you are in a very real sense under the power of the manufacturer,” said Tim Wu, special assistant to the president for technology and competition policy within the National Economic Council. “And when they have repair specifications that are unreasonable, there’s not a lot you can do.”

The Right to Repair movement thinks otherwise—or, is trying to get consumers and manufacturers to think otherwise. The movement is trying to make it easier for people to repair the devices they already own rather than having to buy new ones.

Europe is several steps ahead of the US in this arena. In March of this year the EU implemented a law requiring appliances to be repairable for at least 10 years; new devices have to come with repair manuals and be compatible with conventional tools when their life cycle ends (so that people are more likely to break them down and recycle them). In Sweden, people even get tax breaks for appliance repairs done by technicians in their homes.

Though there are no similar laws in place in the US yet, the Federal Trade Commission has been investigating repair restrictions as they relate to antitrust laws and consumer protection. Unsurprisingly, electronics manufacturers are largely against right to repair, claiming consumer safety could be jeopardized. But an FTC report from May of this year found there was limited evidence to support manufacturers’ justifications for restricting repairs, and that peoples’ device batteries aren’t actually that likely to burst into flames, nor their personal data likely to be compromised by repairing their devices.

According to the WEEE Forum report, around 416,000 phones per day are thrown out in the US. That’s 151 million a year, and guess where they end up? Here’s a hint: 40 percent of heavy metals in landfills come from discarded electronics. Those metals could be recycled for use in new products, but there’s no system nor incentive in place to facilitate this.

While small electronics like phones and laptops may have the fastest turnover, they’re not very heavy, and thus aren’t the biggest contributors to the huge sum of total tons of e-waste. Those culprits are larger items like refrigerators and stoves. But whatever the item is, it comes down to the same principle: we shouldn’t be throwing things out until they’re really, truly done working—and then we should have a way to ensure the recyclable components get to a place where they can be re-used.

Pascal Leroy, director general of the WEEE Forum, said, “Many factors play a role in making the electrical and electronics sector resource efficient and circular. But…as long as citizens don’t return their used, broken gear, sell it, or donate it, we will need to continue mining all-new materials causing great environmental damage.” He added that every ton of waste electronic and electrical equipment that gets recycled saves around two tons of CO2 emissions

Given that repairs directly conflict with their primary motive—profit—companies aren’t likely to make pro-repair moves without some serious pressure from consumers or regulators. And it seems that pressure is already being applied, and responded to: Popular Mechanics reported this week that Microsoft is considering right-to-repair reform, and has hired an independent third party to research the impacts on customers and the environment of making more repairable products.

As WEEE Forum’s Magdalena Charytanowicz said, “Consumers want to do the right thing, but need to be adequately informed, and a convenient infrastructure should be easily available to them so that disposing of e-waste correctly becomes the social norm in communities.”

Let’s hope we move towards that vision before the weight of our electronic trash grows too much more.