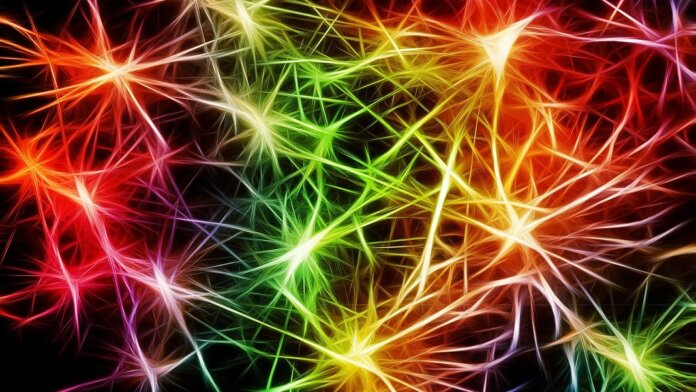 Neurons live in a society, and scientists just found the ones that may allow us to thrive in our own society.

Like humans, individual neurons are strikingly unique. Also like humans, they’re constantly in touch with each other. They hook up into neural circuit “friend groups,” break apart when things change, and rewire into new cliques. This flexibility lets their collective society (the brain) and their owners (us) learn about and adapt to an ever-changing world.

To rebuild neural circuits, neurons constantly monitor the status of their neighbors through sinewy branches that sprout from a rotund body. These aren’t just passive phone lines. Dotted along each branch are little dual-function units called synapses, which allow neurons to both chat with a neuron partner and record previous conversations. Each synapse retains a “log” of past communications in its physical and molecular structure. By “consulting” this log, a neuron can passively determine whether or not to form a network with that particular neuron partner—or even set of partners—or to avoid any interactions in the near future.

Apparently, neurons can do the same for us. This week, by listening to the electrical chatter of single neurons in rhesus macaque monkeys, scientists at Harvard, led by Dr. Ziv Williams, honed in on a peculiar subset of neurons that helps us tell friends from foes.

The neurons, sprinkled across the frontal parts of the brain, are strikingly powerful. As their monkey hosts hung out for game night, the little computers tracked how each player behaved—were they more cooperative, or selfish? Over time, these “social agent identity cells” stealthily map out the entire group dynamic. Using this info, the monkeys can then decide whether to team up with other monkeys or shun them.

It’s not just correlation. By modeling the electrical activity of these neurons, scientists were able to accurately determine any monkey’s past decisions—and mind-blowingly, predict its future ones, basically “mind-reading” the animal’s next move. When the team tampered with the neurons’ activity with a short burst of electrical zaps, the monkeys lost their social judgment. Like the new kid in school, they could no longer decide who to befriend.

“In the frontal cortex, these neurons appear to be tuned for possible action from peers, representing them as communication partners, competitors, and collaborators,” wrote Dr. Julia Sliwa at Sorbonne Université in Paris, who was not involved in the study.

While the results are from monkeys, they’re some of the first to connect the activity of individual neurons to an extremely complicated yet necessary aspect of our lives. These data “are major steps in identifying the neural mechanisms for maneuvering in complex social structure,” she said.

My Brain’s View of You

We often think of neurons and circuits as hardware components that represent us: our perception, memory, decisions, feelings. Yet large parts of the brain are dedicated to representing other people in our external world.

One famous example is the “Jennifer Aniston neuron.” Back in 2005, an experiment showed that a single neuron in a person’s brain could react to a particular face—for example, Aniston’s. A lightbulb moment for neuroscience and computer vision, the study raised a brazen idea: that a single neuron has the computing power to encode a person’s physical identity.

In the real world, it gets more complicated than just identifying a face. A person’s face comes with history—is it my first time meeting them? What’s their reputation? How do I feel about this person?

Much work on how our brains handle social interaction comes from studying bands in music studios or teacher-student dynamics in classrooms. Here, brain activity is captured with wearables, which measure brain waves that wash over parts of the brain. These studies show that when making music or watching a movie together, our brain waves sync up. To rephrase, our brains tune into other peoples’—but when, how, and why this happens is a mystery.

The new study takes an unprecedented peek into the brain as it interacts with another being.

It starts with a simple economics game. Three monkeys sit around a rotary table. Each has a brain implant in its dorsomedial prefrontal cortex (dmPFCs), which was previously linked to social behavior, to capture the electrical buzzing of single neurons. Three food trays are spread out on the table, some with slices of juicy apples, some without. In turns, one monkey (the “actor”) can spin the table to decide whether or not to give another monkey (the “receiver”) an apple slice, or keep it for himself. This setup allowed the team to monitor each monkey’s neural activity as they interacted with others in the trials.

The task may seem simple, said Sliwa, but it taps into the “foundation of economic trade in humans: giving, receiving, and reciprocating.”

In just a few sessions, the monkeys displayed a clear tit-for-tat behavior. When a monkey received a previous apple gift, he was more likely to reciprocate. When shafted, he retaliated more often when given the chance. These transient duopolies, the team said, depended on the actor’s past behavior—its “reputation,” so to speak—throughout 20 trials, rather than an immediate past. If any monkey exhibited selfish behavior, the others would retaliate by not offering him food. These decisions relied on actual interactions: replacing a monkey with a similar-looking stuffed animal erased the behavior.

As the monkeys played, a group of neurons in the dmPFC buzzed with activity. Recording from over 500 single neurons, the team found 50 that fired up when they received a reward from a particular monkey. That is, these neurons captured a historical ledger of interactions with specific individuals.

Using machine learning, the team next decoded signals from each neuron to see if their activity predicted the monkeys’ responses, either as actors or recipients. The algorithm could parse the actor’s action before it happened at nearly 90 percent accuracy. As the trials progressed, the accuracy for the recipient’s identity gradually increased to roughly 70 percent.

“The activities of these neurons held detailed representations about specific interactions within the group,” the authors said.

With brain stimulation, the team could also temporarily rewrite naivete into the brain. In one test, the team disrupted signals from these social neurons with short electrical bursts before a monkey made his decision to reciprocate or retaliate. The result? The monkey had less ability to decide whether to be friend or foe.

This study isn’t the only one seeking to broaden our scope in understanding social cognition. A separate study in bats in the same Science issue also showed that our brains rapidly change and adapt to multiple social interactions; you may become fast friends with one person while other ties, potentially stronger, take longer to build.

We’re now understanding why this is the case. Our world consists, in essence, of a multitude of brains: each neuron is a mini-computer in a larger group that collectively forms a human’s mind; each human, in turn, interacts in a collective consciousness to chart the future of our species and our planet.

Traditionally, scientists have often focused on a single interaction, a single brain, or a pair of individuals. That’s not the world we normally live in.

“These studies…emphasize that in the future, it will be necessary to navigate between two levels of investigation to fully grasp social intelligence: that of the group of brains and that of the individual brain,” said Sliwa.