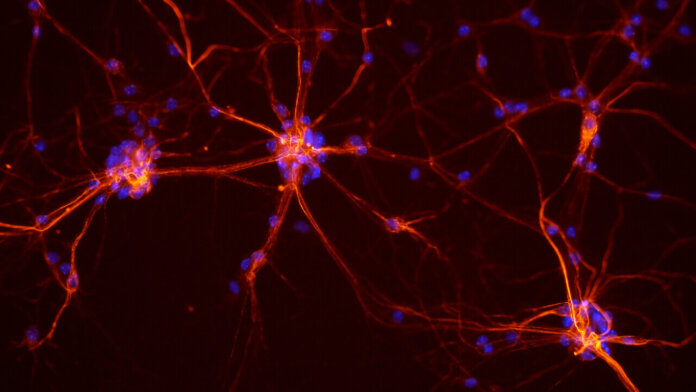 Comparing brains to computers is a long and dearly held analogy in both neuroscience and computer science.

It’s not hard to see why.

Our brains can perform many of the tasks we want computers to handle with an easy, mysterious grace. So, it goes, understanding the inner workings of our minds can help us build better computers; and those computers can help us better understand our own minds. Also, if brains are like computers, knowing how much computation it takes them to do what they do can help us predict when machines will match minds.

Indeed, there’s already a productive flow of knowledge between the fields.

Deep learning, a powerful form of artificial intelligence, for example, is loosely modeled on the brain’s vast, layered networks of neurons.

You can think of each “node” in a deep neural network as an artificial neuron. Like neurons, nodes receive signals from other nodes connected to them and perform mathematical operations to transform input into output.

Depending on the signals a node receives, it may opt to send its own signal to all the nodes in its network. In this way, signals cascade through layer upon layer of nodes, progressively tuning and sharpening the algorithm.

The brain works like this too. But the keyword above is loosely.

Scientists know biological neurons are more complex than the artificial neurons employed in deep learning algorithms, but it’s an open question just how much more complex.

In a fascinating paper published recently in the journal Neuron, a team of researchers from the Hebrew University of Jerusalem tried to get us a little closer to an answer. While they expected the results would show biological neurons are more complex—they were surprised at just how much more complex they actually are.

In the study, the team found it took a five- to eight-layer neural network, or nearly 1,000 artificial neurons, to mimic the behavior of a single biological neuron from the brain’s cortex.

Though the researchers caution the results are an upper bound for complexity—as opposed to an exact measurement of it—they also believe their findings might help scientists further zero in on what exactly makes biological neurons so complex. And that knowledge, perhaps, can help engineers design even more capable neural networks and AI.

Neurons are the cells that make up our brains. There are many different types of neurons, but generally, they have three parts: spindly, branching structures called dendrites, a cell body, and a root-like axon.

On one end, dendrites connect to a network of other neurons at junctures called synapses. At the other end, the axon forms synapses with a different population of neurons. Each cell receives electrochemical signals through its dendrites, filters those signals, and then selectively passes along its own signals (or spikes).

First, they built a model of a biological neuron (in this case, a pyramidal neuron from a rat’s cortex). The model used some 10,000 differential equations to simulate how and when the neuron would translate a series of input signals into a spike of its own.

They then fed inputs into their simulated neuron, recorded the outputs, and trained deep learning algorithms on all the data. Their goal? Find the algorithm that could most accurately approximate the model.

(Video: A model of a pyramidal neuron (left) receives signals through its dendritic branches. In this case, the signals provoke three spikes.)

They increased the number of layers in the algorithm until it was 99 percent accurate at predicting the simulated neuron’s output given a set of inputs. The sweet spot was at least five layers but no more than eight, or around 1,000 artificial neurons per biological neuron. The deep learning algorithm was much simpler than the original model—but still quite complex.

From where does this complexity arise?

As it turns out, it’s mostly due to a type of chemical receptor in dendrites—the NMDA ion channel—and the branching of dendrites in space. “Take away one of those things, and a neuron turns [into] a simple device,” lead author David Beniaguev tweeted in 2019, describing an earlier version of the work published as a preprint.

Indeed, after removing these features, the team found they could match the simplified biological model with but a single-layer deep learning algorithm.

It’s tempting to extrapolate the team’s results to estimate the computational complexity of the whole brain. But we’re nowhere near such a measure.

For one, it’s possible the team didn’t find the most efficient algorithm.

It’s common for the the developer community to rapidly improve upon the first version of an advanced deep learning algorithm. Given the intensive iteration in the study, the team is confident in the results, but they also released the model, data, and algorithm to the scientific community to see if anyone could do better.

Also, the model neuron is from a rat’s brain, as opposed to a human’s, and it’s only one type of brain cell. Further, the study is comparing a model to a model—there is, as of yet, no way to make a direct comparison to a physical neuron in the brain. It’s entirely possible the real thing is more, not less, complex.

Still, the team believes their work can push neuroscience and AI forward.

In the former case, the study is further evidence dendrites are complicated critters worthy of more attention. In the latter, it may lead to radical new algorithmic architectures.

Idan Segev, a coauthor on the paper, suggests engineers should try replacing the simple artificial neurons in today’s algorithms with a mini five-layer network simulating a biological neuron. “We call for the replacement of the deep network technology to make it closer to how the brain works by replacing each simple unit in the deep network today with a unit that represents a neuron, which is already—on its own—deep,” Segev said.

Whether so much added complexity would pay off is uncertain. Experts debate how much of the brain’s detail algorithms need to capture to achieve similar or better results.

But it’s hard to argue with millions of years of evolutionary experimentation. So far, following the brain’s blueprint has been a rewarding strategy. And if this work is any indication, future neural networks may well dwarf today’s in size and complexity.