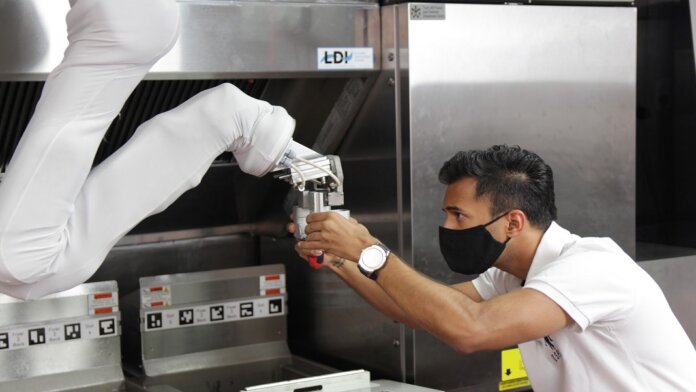 Before the pandemic started (ah, those glorious days…) a collective panic was mounting over automation and robots gradually replacing workers in various fields, or “stealing our jobs,” as the common refrain went. These worries haven’t subsided two years later, but they’re being countered by severe and largely unexpected labor shortages across multiple sectors of the economy. One of the industries that’s struggling most is restaurants. While we may still encounter automation-related unemployment problems down the road, right now it seems robots are lending a much-needed hand in food service.

One of these robots is none other than Flippy, initially debuted in 2017 to flip burgers at a California fast food chain. Since then Miso Robotics, Flippy’s maker, has expanded the bot’s capabilities, creating a version that can cook chicken wings, fries, and other greasy delights. This week also brought a significant expansion to Flippy’s presence as White Castle announced plans to install the robot at more than 100 restaurants this year.

White Castle was the first restaurant chain to significantly invest in Flippy, piloting the robotic assistant in 2020. The chain gave feedback about the robot to Miso, and the company put out a second iteration called Flippy 2 last November. This new robot can independently do the work of an entire fry station: its AI-enabled vision identifies foods, picks them up, and cooks them in fry baskets designated for that food specifically. The bot then moves cooked items to a hot-holding area.

In terms of jobs being taken by robots, working a frying station seems like one we should hand over pretty readily; standing over boiling-hot oil is monotonous and, depending how much attention you’re paying and how steady-handed you are, can be dangerous. “It was a perfect opportunity for automation robotics to step in and help,” said Miso Robotics CEO Mike Bell.

The robot’s throughput is 30 percent higher than that of its predecessor, which adds up to around 60 baskets of fried food per hour. According to Bell, “Flippy 2 has more than 120 configurations built into its technology and is the only robotic fry station currently being produced at scale.”

The initial commercial version of Flippy went on the market for $30,000 in 2020, but Miso’s aiming to get the price down to $20,000. There’s also $1,500 monthly fee for the robot’s software. So while the robotic kitchen assistant isn’t exactly cheap, it will pay for itself pretty quickly when compared to the cost of keeping human employees on staff.

Comparisons like this are exactly what feed fears around technological unemployment. However, there are signs that the labor shortages we’re currently seeing may not be temporary. An April 2021 report called The Demographic Drought, put together by labor market data company Emsi, predicted that we’re going to be stuck with “too much work and too little people” for a long time.

Many workers from the baby boomer generation retired early because of the pandemic, birth rates are falling, and millennials have less of a need to work thanks to inheriting money from their parents or grandparents—these and other factors already mean a lot of unfilled jobs, and as the economy rebounds from the pandemic and continues to grow, it’s likely we’ll see even more of a need for workers.

So we can’t hate on Flippy too much, and shouldn’t be at all surprised if several more fast food chains soon make the robot a permanent part of their payroll.