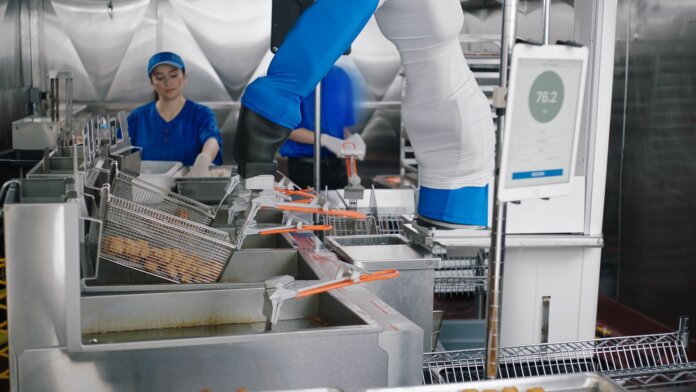 No doubt about it, the pandemic has changed the way we eat. Never before have so many people who hated cooking been forced to learn how to prepare a basic meal for themselves. With sit-down restaurants limiting their capacity or shutting down altogether, consumption of fast food and fast-casual food has skyrocketed. Don’t feel like slaving over a hot stove? Just hit the drive through and grab a sandwich and some fries (the health implications of increased fast food consumption are another matter…).

Given our sudden immense need for paper-wrapped burgers and cardboard cartons of fries, fast food workers are now counted as essential. But what about their safety, both from a virus standpoint and from the usual risks of working in a busy kitchen (like getting burned by the stove or the hot oil from the fryer, cut by a slicer, etc.)? And how many orders of burgers and fries can humans possibly churn out in an hour?

Enter the robot. Three and a half years ago, a burger-flipping robot aptly named Flippy, made by Miso Robotics, made its debut at a fast food restaurant in California called CaliBurger. Now Flippy is on the market for anyone who wishes to purchase their own, with a price tag of $30,000 and a range of new capabilities—this burger bot has progressed far beyond just flipping burgers.

Flippy’s first iteration was already pretty impressive. It used machine learning software to locate and identify objects in front of it (rather than needing to have objects lined up in specific spots), and was able to learn from experience to improve its accuracy. Sensors on its grill-facing side took in thermal and 3D data to gauge the cooking process for multiple patties at a time, and cameras allowed the robot to ‘see’ its surroundings.

A system that digitally sent tickets to the kitchen from the restaurant’s front counter kept Flippy on top of how many burgers it should be cooking at any given time. Its key tasks were pulling raw patties from a stack and placing them on the grill, tracking each burger’s cook time and temperature, and transferring cooked burgers to a plate.

The new and improved Flippy can do all this and more. It can cook 19 different foods, including chicken wings, onion rings, french fries, and even the Impossible Burger (which, as you may know, isn’t actually made of meat, and that means it’s a little trickier to grill it to perfection).

And instead of its body sitting on a cart on wheels (which took up a lot of space and meant the robot’s arm could get in the way of human employees), it’s now attached to a rail along the stove’s hood, and can move along the rail to access both the grill and the fryer (provided they’re next to each other, which in many fast food restaurants they are). In fact, Flippy has a new acronym attached to its name: ROAR, which stands for Robot on a Rail.

Sensors equipped with laser make it safer for human employees to work near Flippy. The bot can automatically switch between different tools, such as a spatula for flipping patties and tongs for gripping the handle of a fryer basket. Its AI software will enable it to learn new skills over time.

The first big restaurant chain to go all-in on Flippy was White Castle, which in July announced plans to pilot Flippy ROAR before year’s end. And just last month, Miso made the bot commercially available. The current cost is $30,000 (plus a monthly fee of $1,500 for use of the software), but the company hopes to bring the price down to $20,000 within the next year.

According to Business Insider, demand for the fast food robot is through the roof, probably given a significant boost by the pandemic—thanks, Covid-19. The pace of automation has picked up across multiple sectors, and will likely continue to accelerate as companies look to insure themselves against additional losses.

So for the immediate future, it seems that no matter what happens, we don’t have to worry about the supply of burgers, fries, onion rings, chicken wings, and the like running out.

Maybe that can be Miso Robotics’ next project.