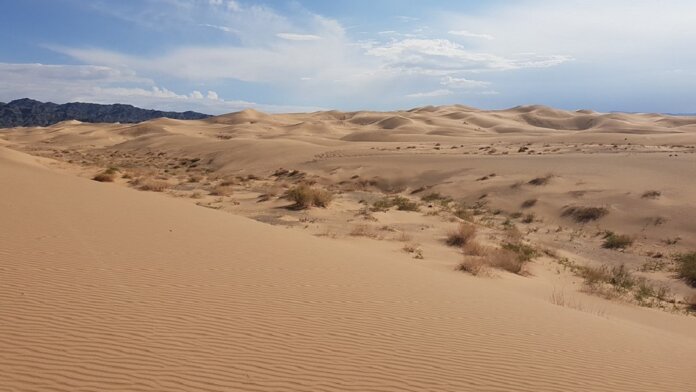 Last year the Chinese government set an ambitious energy target, aiming for 40 percent of its grid’s power to come from non-fossil fuel sources by 2030. President Xi Jinping also said China will be carbon neutral by 2060. This week the country put its money where its mouth is, announcing construction of 450 gigawatts (GW) of solar and wind power, all of which will be put up in the Gobi and other deserts.

China is already a world leader in renewable energy, accounting for around 40 percent of global renewable capacity growth in recent years. It leads in manufacture of solar panels and wind turbines and is the biggest supplier of the raw materials they’re made of (including silicon, glass, steel, and copper).

But despite the country’s existing renewables might, 450 GW is an even mightier target. To put that number in perspective: the total power generation capacity in the US as of this February stood at 1200 GW—and that includes natural gas, coal, nuclear, hydro, wind, and solar. The entire world collectively added 290 GW of capacity from renewable sources in 2021. Mammoth Solar farm, under construction in northwest Indiana, will take up an area equal to 1,000 football stadiums and have a generating capacity of 1.65 GW.

Let’s say a third of the 450 GW will come from solar farms, a third from wind turbines, and a third from hydropower (the last of which is unlikely given the desert location; maybe swap hydro out for nuclear). If the solar panels have comparable metrics to those being used at Mammoth, panels would ultimately cover an area equivalent to about 90,909 football stadiums. Not fields—stadiums.

The Chinese government hasn’t specified source percentages of its planned renewable power, nor a completion date, though we can assume it plans to have the full 450 GW up and running by 2030. The US has built 1200 GW over the course of 140 years (Pearl Street station was our first power plant, established in 1882 by Thomas Edison himself); China wants to build more than a third of that amount in 8 years. As inconceivable as the goal seems, if anyone can do it, it’s an autocratic regime with quick centralized decision-making and efficient resource allocation.

Construction is reportedly already underway on 100 GW of the new capacity, adding to the existing 328 GW of wind power and 307 GW of solar in China. The new capacity came despite major constraints and price rises in materials; the price of polysilicon, a key raw material for making solar cells, was 2.5 times higher in June 2021 than at the beginning of the year. The costs of labor and freight also went up as the pandemic continued to throw wrenches into the supply chain.

This was all moving to a more stable place when an even bigger wrench was thrown into the mix: Russia’s invasion of Ukraine. Like everyone else, China’s now scrambling to ensure its energy supply is secure, announcing plans this week to up its coal production and reserve capacity.

Though China leads the world in renewables, it’s also the biggest consumer of coal by far, and had ramped up production even before the Ukraine crisis began. A government statement said the country will “continue to leverage the peak-shaving and basic supporting role of traditional energy, especially coal and coal-fired power.”

Not only does it take energy to make energy, but overall demand for energy—in China and the rest of the world—is only going to grow. We can blanket huge swathes of land with solar panels and wind turbines, but it’s ultimately going to take a lot more than that to truly exit coal.