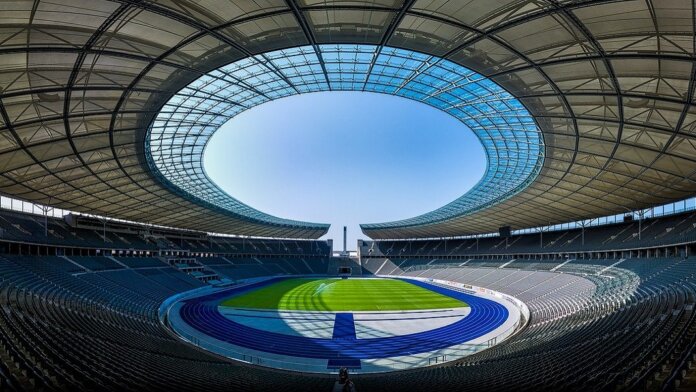 The transition away from fossil fuels and towards renewable energy sources is underway, with solar and wind farms popping up everywhere from the UK to China. A new project in the central US will pile on some significant green energy capacity, as the country’s biggest solar farm starts construction.

The Mammoth Solar farm, as it’s been appropriately dubbed, will be built in a rural area of Indiana about 80 miles south-east of Chicago. Once it’s complete, the farm will occupy 13,000 acres—that’s equivalent to about 1,000 football stadiums. Distributed throughout that space will be 2,850,000 solar panels, which will generate 1.65 gigawatts of electricity.

How big is that, exactly? Let’s do some comparisons. The biggest solar farm in the world is Bhadla Solar Park in India; it spans 14,000 acres and has a capacity of 2.25 GW. The biggest operational farm in the US is Solar Star in California, which cranks out 579 megawatts (0.58 GW). Mammoth falls somewhere in the middle, but will be almost three time as big as the California farm.

Israeli energy company Doral Renewables is spearheading the project, and will sell the power that’s generated at Mammoth to Columbus, Ohio-based American Electric Power. Doral is the owner-operator of over 400 energy facilities globally, and has three other projects underway in the US right now: Goonies Solar in Pennsylvania (so named because of the rocks that litter the piece of land where this farm is going up), Deere Acres Solar in Delaware, and Anthracite Ridge Wind, also in Pennsylvania.

Interestingly, none of Doral’s solar projects are located in states that are known for being particularly sunny—your Arizonas, Californias, or Texases, for example. The Mammoth farm is by far the largest of any of the company’s US solar farms, but Northwest Indiana project is hardly known for its bright, sunny skies. But Doral’s page about the project emphasizes the area’s “unique geographic characteristics,” namely flat land that’s situated on a key grid location, and says that building a solar farm here will assure economies of scale that will yield a low cost of energy.

Mammoth will be built in three phases, with the first already underway. According to a press statement, Doral will invest $475 million in the first phase, which will produce 400 megawatts of clean energy and is expected to become operational by mid-2023. Construction on the second and third phases will start in 2022, and if all goes according to plan the farm should be fully operational by 2024.

The project will reportedly remove 40,000 tons of greenhouse gas emissions from the atmosphere and conserve 1 billion gallons of irrigation well water annually, as well as creating 500 temporary jobs during construction and 50 long-term jobs related to running the facility.

There’s been much debate about whether renewable energy will be able to meet our power needs in the coming decades; in the rush to ditch fossil fuels, no matter how many solar panels and wind turbines we install, there’s no way wind and solar alone will cut it once there’s no more coal being burned. Nuclear power and natural gas (and maybe even fusion power) will be needed to pick up the slack—or, more likely, to be the primary workhorses in producing the clean energy of the future.

Nonetheless, as our climate predicament steadily gets more dire, we need to be doing everything we can to slow the planet’s warming. Coating rural land with solar panels, then? We’ll take it.