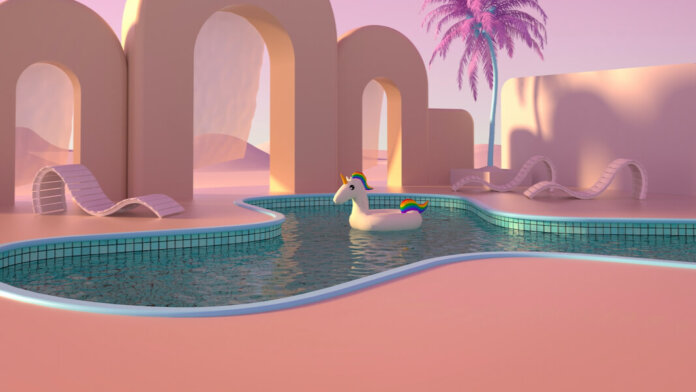 From oddly-dressed apes to clip-art yachts, NFTs have been all the rage for the last year. But will this new trend last, or is it just that—a trend that will ultimately fade, leaving those who’ve poured money into digital works of art wishing they’d bought a painting or sculpture instead?

In a talk at South by Southwest this week, artist Beeple (whose given name is Mike Winkelmann) shared his thoughts on why NFTs matter and what their future might look like.

It was almost exactly a year ago that Beeple auctioned off his piece Everydays: the First 5000 Days, a collage of 5,000 digital images he created over the course of as many days (he started in 2007); that’s some consistency right there. The piece sold at Christie’s for a whopping $69 million, making Beeple the third-most expensive living artist behind American sculptor Jeff Koons and British painter David Hockney. It also marked the first time a purely digital work of art was auctioned off by a major auction house, and helped legitimize NFTs as an art form.

Before the sale, Winkelmann said, “I had not sold my art directly because there was really no market and way for people like me to do that. I was making money as a freelance graphic designer and was getting better jobs as I gained more notoriety.” He’d only become aware of NFTs about five moths prior, and knew nothing about cryptocurrency or the blockchain. “I got lucky with the fact that I was working on this project well before the blockchain even existed, and in retrospect it fit very well with this new technology,” he said. He still creates and posts a new image every day.

Ironically, though, as the art world takes steps towards becoming more digital, Winkelmann has moved in the other direction, recently opening his first physical gallery in New York. “I wanted to do something…to show people that digital art is just another medium that has the same messages and craft and emotion attached to it that any painting or sculpture has,” he said. “What gives anything value is that emotional connection.”

The exhibit, called Uncertain Future, displays prints of works the artist made digitally, and aims to encourage dialogue about the role big tech companies play in our lives and the power they have in modern society (for example, Winkelmann said, “By kicking Trump off Twitter, Jack Dorsey unilaterally made a decision that affected the global power structure.”).

Part of the promise of NFTs, he believes, is that they’re going to allow people to have more ownership over their virtual selves. Though there’s a lot of hype around the metaverse, crypto, and NFTs right now, it does appear likely the internet will look different in the not-too-distant future. Winkelmann predicts it will be less centralized, with more segmentation of the market and users having more control over their data. “Instead of uploading personal information to sites that take it and use it to sell ads, you’ll have true ownership of your information,” he said.

The artist acknowledged that it will take time for the traditional art world to accept his work—and NFTs overall—as true art, and it won’t be the first time a new medium slowly gains recognition as an art form. “Photography wasn’t art for a long time, but then it was,” he said. “That’s what this moment is about: widening peoples’ perception of what can be art.”

It will also take time for people to understand and appreciate virtual ownership (myself included). “This is a blank slate and it can do so many different things,” Winkelmann said. “At its core it’s actually such a simple idea, being able to prove you own something that doesn’t exist.” Virtual ownership could also find applications outside of art, for different types of assets or inventory systems.

Before these possibilities become reality, though, there’s room for improvement across multiple aspects of NFT technology. The marketplaces for NFTs are still very new and immature, and many of them need to create better protections for users and improve their interfaces. The aforementioned widespread lack of understanding of the tech will need to mature as well.

As ominous as it seems in many ways, life is steadily becoming more digitized and moving into virtual spaces. We don’t yet know the trajectory this will take in the next decade, or if NFTs will still be around—or, more importantly, still be worth millions—later in our lifetimes. What it comes down to, Winkelmann concluded, is that in order for them to last, NFTs will have to prove their value both as a technology and as an art form, giving us something superior to traditional art. “None of this NFT sh*t is going to last if it’s not better than what came before,” he said.